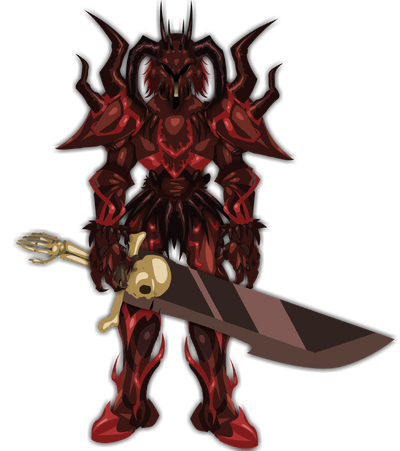 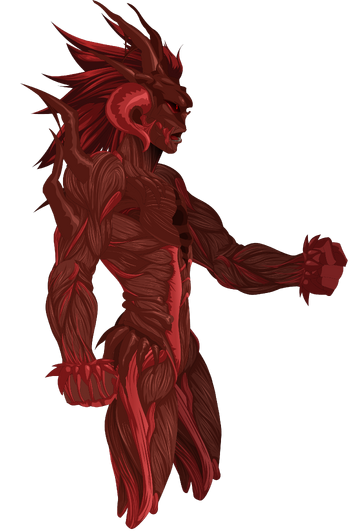 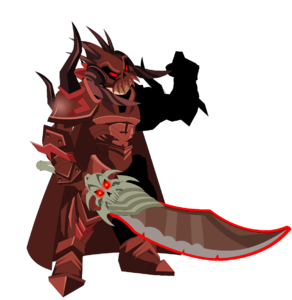 Sepulchure, previously known as Sir Valen is a DoomKnight and the former leader of the Shadowscythe. Sepulchure previously was known as one of the three greatest heroes of Lore until he stole and wore the cursed DoomKnight armor in order to save Lynaria from King Dethrix. As a result, he was consumed by the darkness and decided to leave Swordhaven and establish the Shadowscythe along with Noxus. His ultimate objective is to collect all the prime Elemental Orbs to form the Ultimate Orb and absorb its power.

Powers and Abilities: Superhuman Physical Characteristics, Magic, Energy Manipulation, Weapon Mastery, Holy Manipulation, Summoning with a Dragon Amulet. | All previous, Levitation, Shapeshifting, Size Manipulation, Extrasensory Perception, Non-Physical Interaction, can become Non-Corporeal as a disembodied soul, Death Manipulation (Can turn living beings into skilled undead swordsmen, can also "kill death" and cause everyone within a given timeline as well as previously dead individuals to become zombies), Necromancy, Immortality (Types 1, 2, 3, 6, and 7), BFR (Can banish individuals to the Darkness Realm), Darkness Manipulation, Possession, Soul Manipulation, Resurrection, Teleportation, Illusion Creation, Fusionism, Body Control with the DoomBlade, Regeneration (Low-Godly: still remained conscious despite his soul being shattered into pieces by Drakath and is heavily implied to be capable of reforming himself given enough time), some degree of Spatial Manipulation (Brought portion of the Plane of Darkness onto the living world in order to fight Lynaria), possibly Conceptual Manipulation (Type 4. Managed to kill Death, causing all previously dead individuals within the timeline to come back to life as the concept no longer exists), Resistance to Death Manipulation (Unaffected by the "death" of Death), Paralysis Inducement (Immune to inflicted immobility), Size Manipulation, and Holy Manipulation (Was unable to be purified by Lumia's magic).

Attack Potency: Unknown (Defeated Monster King Dethrix and Champion of Light Lynaria as a DoomKnight) | At least Planet level at his prime (Equal or even superior to the hero's dragon "World Destroyer". Single-handedly defeated Drakath fused with a Dracolich and the Ultimate Orb) | Island level (He implied that even in his current state he could still harm the hero) | Likely Multi-Solar System level (Comparable to other Champions such as Drakath and the hero and he was shown to be able to kill Death itself in an alternate timeline and successfully conquered the world in the original timeline)

Durability: Unknown | At least Planet level at his prime (Survived being stabbed by his own blade and crushed by Mysterious Stranger) | Island level | Likely Multi-Solar System level (Took a casual attack from Drakath and got up right after it. His immortality makes him very difficult to kill and no one was able to truly destroy his soul)

Stamina: Inhuman. Effortlessly killed Dethrix the Monster King and Hope, the Champion of Light's dragon | Likely High. Could still fight Darkness Dragon Drakath after being stabbed by his own blade | Likely High. Even in a weakened state he could still cast an advanced purification spell which even expert magic users like Artix, Hero of Lore, Nythera and Elysia couldn't cast alone | High. Took fatal attacks from Drakath after his fight with King Alteon and was still able to stand)

Range: Extended melee range with his blade but higher with his magic, Planetary with the Plane of Darkness

Intelligence: An effective and powerful ruler who claimed dominion over the undead for decades and effectively held off the armies of Swordhaven (and would have defeated them several times if not for the efforts of The Hero). Also a skilled swordsman and wielder of Magic and an almost unparalleled warrior. He is also a scholar who is adept in both Dark and Light magic.

Retrieved from "https://vsbattles.fandom.com/wiki/Sepulchure?oldid=5386460"
Community content is available under CC-BY-SA unless otherwise noted.