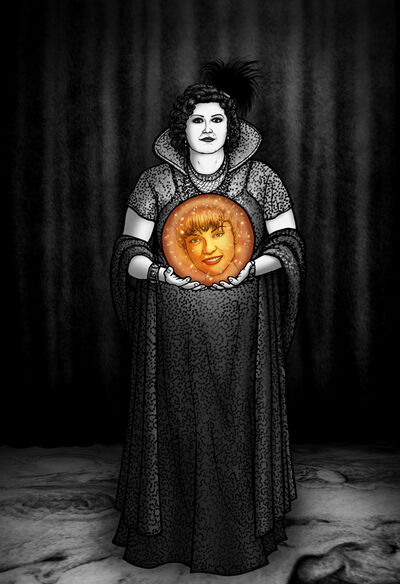 A mysterious "woman" who belongs to an abstract Home on an equally abstract purple sea, potentially the "Mauve Zone" of Kenneth Grant's writings. She oversees the film of existence alongside her seeming consort known only as The Fireman. With the inception of JUDY and BOB into the world as a result of a nuclear Experiment manifested by the mysterious Mother, Senorita Dido was made aware of something amiss by the resounding of an ethereal bell. Then, with the appearance of the Fireman, who noticed an "audience" in their Home, they communicated non-verbally and, with just a look, knew to engage in some profound, abstract ritual to counter the influence of Mother's actions in the universe.

As the Fireman wove the golden light emitting from behind his face into the form of a shining orb, Senorita Dido came forward, a light on her at all times emphasizing her importance, and she filled the orb with love, causing the face of Laura Palmer to appear within, mirroring Mother's creation of BOB. She then sent the orb containing the girl into the film of existence and the dream of space and time, where the essence would arise later on as the child of Leland and Sarah Palmer. An enigmatic divinity, she is only observed on one occasion, and her greater role within the story of Twin Peaks is currently unknown.

Name: Unknown, although she is referred to as "Senorita Dido" in the credits

Classification: Cherub, Spirit of the White Lodge, Conceptual being, Feminine Aspect of the "God Energy"

Attack Potency: High Outerverse level (Stands in the unmanifest field of the Mauve Zone, at the primal basis of the entire story of Twin Peaks, from which all of existence and nonexistence emerge and are directed through the electricity that she commands, while being seen as equally irrelevant parts of a linear narrative observed from outside, contained within a film which she can influence at will. Resides in an unknowable state of pure silence, outside of the movie and beyond the limits of words and categorization altogether, personifying a pure mystery whose essence is unable to be captured by language or comprehension, metaphysical or not, and will always remain fully impenetrable and out of reach to any kind of explanation or conceptualization which one may attempt to impose upon it) | Unknown (Heavily implied to be an equal force to The Fireman, acting as the feminine aspect of God that complements the masculine archetype embodied by him. Having partaken into the creation of Laura Palmer by blessing the Fireman's essence with her own, she most likely partakes in the same overarching, abstract "god energy" as he does, standing in direct contrast to Mother.)

Intelligence: Exists on a level beyond human comprehension and conceptualization, and should be on the same level of intelligence as the Fireman, as the two communicated without exchanging any words.