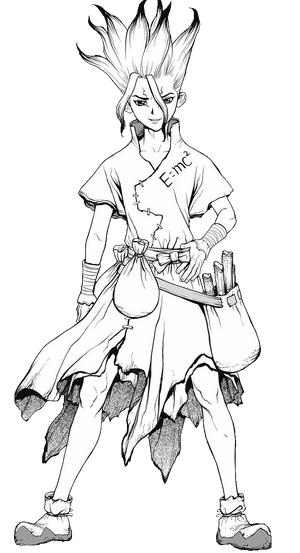 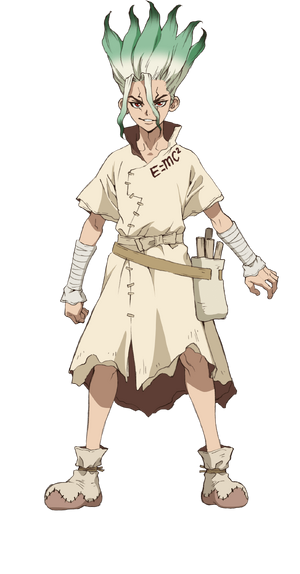 Senku Ishigami (石いし神がみ千空 Ishigami Senkū) is the main protagonist of the manga and anime Dr. Stone.

After the entire world was petrified for thousands of years, nature reclaimed the Earth, leaving humanity forgotten. After awakening from his petrification sometime in April, 5738 AD, Senku swears to recreate civilization and restore humanity using the power of science.

Tier: 10-B physically; at least 9-B, potentially higher via various tools and chemicals

Powers and Abilities: Genius Intelligence (A child prodigy. Capable of creating sub-orbital class rockets as a child and holds a vast knowledge in a wide multitude of subjects. Capable of creating a crude, but working cellular phone using primitive tools and technology. Counted the entire 1.17345e+8 seconds he was petrified), Light Manipulation, Petrification, and Healing via The Petrification Device, Preparation (Would benefit immensely with preparation), Explosion Manipulation (via Nitroglycerin and Gunpowder), Poison and Acid Manipulation (via various acids), Electricity, Sound Manipulation and Flight with enough preparation, Resistance to Poison Manipulation (via Gas masks) and possibly Madness Manipulation (Was fully conscious for the entire 3,721 years that he was petrified, and spent the entire time counting the seconds to keep track of time while "parallel-thinking" other subjects in the background. During this time, he managed to retain his sanity despite the unbelievable boredom that he must have experienced)

Attack Potency: Human level physically. At least Wall level (Tossed a paper airplane laced with nitroglycerin), potentially higher with various tools and chemicals, can ignore durability to an extent via The Petrification Device

Range: Standard melee range normally, up to tens of meters with various tools and weapons (The world's farthest-flying paper airplane (note that the Guinness Book of Records was specifically mentioned as a point of reference), which was used by Senku, had a flight distance of 69.14 meters), potentially planetary via The Petrification Device

Standard Equipment: A telescope, a couple of hand mirrors, a crude sextant and The Petrification Device

Intelligence: Extraordinary Genius; Capable of creating sub-orbital rockets as a child, holds enough knowledge and intellect that could rival the modern world's greatest minds. After being petrified, he was able to remain conscious by constantly counting every second for 3,700 years while thinking about other subjects at the same time. In the Stone World, he reinvented electricity, cars, cellular phones, sonar, radio, a tank, explosives, antibiotics, a revolver, and countless other modern inventions from scratch. Is capable of calculating the trajectories of moving objects in a second or two under high pressure, and the size of objects via scaling.

Weaknesses: Physically weak compared to the rest of the characters. While he is the most intelligent character in the entire series, he lacks physical strength, resulting in him depending on his comrades to make up for his lack of physical ability. He is also very vulnerable to hypothermia and is allergic to lacquer. Senku isn't immune to The Petrification Device's effect.

Saitama (One-Punch Man) Saitama's Profile (Saitama in his 9-B key, speed unequal, and Senku was given 2 hours of prep)

Baldi (Baldi's Basics) Baldi's Profile (Both were given twenty minutes of prep, Petrification Device was restricted, and the battle takes place in Here School)

Retrieved from "https://vsbattles.fandom.com/wiki/Senku_Ishigami?oldid=6990458"
Community content is available under CC-BY-SA unless otherwise noted.