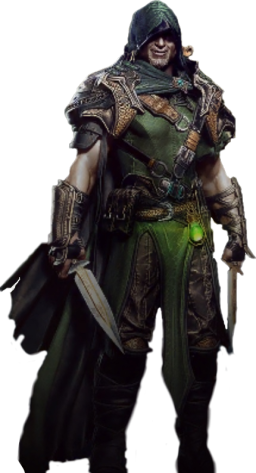 Senkis is the first "Boss" the player faces off against in Dungeon Hunter 5. Senkis is a bandit, who happens to be one of Thoan's followers. Blessed with Immortality by Thoan, Senkis' inability to die has made him one of the most wanted criminals across Valenthia. He was ultimately stopped by the Bounty Hunter.

Age: Appears to be in his late 30s

Powers and Abilities: Superhuman Physical Characteristics, Enhanced Senses, Non-Physical Interaction (Can attack and hurt intangible and non-corporeal beings with all of his attacks), Immortality (Types 1, 3, 5 and 8 due to Thoan's blessings, he cannot age and will continue to recover, self-resurrect and fail to permanently die as long as his blessings are active and the Wraith within him is not slain, Thoan's blessings allow his servants to transcend the concepts of life and death), Regeneration (Low-Godly, he can regenerate as long as the spirit who possessed him is not slain, physical injuries and damage means nothing to him due to Thoan's blessing), Resurrection (He constantly and passively gets resurrected every time he "dies" and comes back with all of his wounds healed, no matter how fatal they are)

Attack Potency: Small Building level (Even regular bandits are comparable to Imps and Valen Knights, Senkis, as a bandit blessed by Thoan is far superior to them and he is somewhat comparable to an early game Bounty Hunter)

Stamina: Infinite (Due to Thoan's blessings, Senkis no longer tires unlike mortals)

Weaknesses: He can be fully killed if the Spirit within him is destroyed.

Retrieved from "https://vsbattles.fandom.com/wiki/Senkis?oldid=4124392"
Community content is available under CC-BY-SA unless otherwise noted.