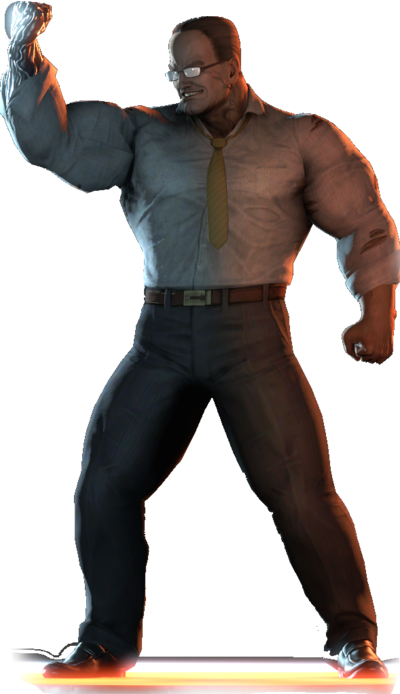 Steven Armstrong is the main antagonist of the game Metal Gear Rising: Revengeance, and is a United States Senator representing the U.S. state of Colorado, as well as a candidate for the 2020 United States Presidential Election. When Armstrong was young, he used to play college football for the University of Texas, in which he excelled at the game. Years later, he later joined the United States Navy, which sacrificed his chances of going pro. By the time of 2018, Armstrong became the senator of Colorado. He was also the benefactor for World Marshal Inc., as well as its de-facto CEO.

Powers and Abilities: Superhuman Physical Characteristics, Expert Hand-to-Hand Combatant, Acrobatics (Can jump very high), His body is composed entirely of nanomachines, Statistics Amplification (His nanomachines react to trauma and harden to match the force of incoming attacks, and Steven can amplificate his stats by releasing his nanomachine energy), some degree of Cyborgization (Has a cyborg heart), Aura (As seen here), Limited Technology Manipulation, Invulnerability, Can absorb energy from nearby machinery to power his nanomachines and recover health, Can generate explosions and fissures of fire, Minor Physics Manipulation (Dok stated that destroying a high-frequency blade with bare hands defies every core tenet of modern physics, which Armstrong has casually done against Raiden), Shockwave Generation (Is capable of creating offensive shockwaves with his stomps and kicks), Pseudo-Electromagnetism (Which he can use to levitate and use Telekinesis to toss around metal objects), Limited Energy Projection (Can create bursts of energy), Regeneration (High-Low; can reattach lost limbs), Strong Will, Social Influencing (Is a very charismatic and clever politician who could bring many men on his side), High Pain Tolerance (Wasn't flinched by Raiden's punches and having hand ripped through chest), Resistance to Quantum Manipulation and Vibration Manipulation (Can resist the effects of HF Blades while his nanomachines are active and hardened), Empathic Manipulation (Sam stated that nanomachines grant resistance to fear and battlefield emotions, whilst still feeling them deep inside their mind, cyborgs are unaffected by them physically and are still fully capable of fighting), Extreme Heat and Fire Manipulation (Casually withstood the heat from the EXCELSUS' explosion and his own fire)

Attack Potency: Large Town level (Overpowered Raiden shortly after he easily destroyed Metal Gear EXCELSUS, far superior to Raiden before he obtained the Murasama, with Doktor stating that even a single blow from him could prove fatal for Raiden)

Speed: At least Sub-Relativistic (Can react to and counter Raiden's Ripper Blade Mode attacks, which are at least this fast)

Lifting Strength: Class G (Overpowered Raiden in a brief struggle and brought him to his knees)

Durability: Large Town level (No-sold the explosion of the EXCELSUS, which generated energy equivalent to 121 kilotons of TNT), higher with his hardened body (Barely affected by Raiden's HF Blade, even when he used Blade Mode. Raiden could only deal lasting damage after obtaining Sam's superior Murasama Blade and attacking his heart)

Stamina: Very high, but lower than that of the likes of Raiden.

Intelligence: Gifted. Armstrong is a very successful, charismatic leader and politician (albeit his speechwriters may have most to do with that side.) Highly knowledgeable in sports and has at least a college graduate level of education. In combat he's a rather well-versed brawler (and probably knows at least some degree of armed and unarmed martial arts due to being in the Navy), allowing him to toss around foes as skilled and powerful as Raiden and Jetstream Sam with ease when used along with his nanomachine implants. He also has the know how to act as the de facto CEO for massive military corporations.

Weaknesses: Armstrong will die if his nanotech-infused heart is destroyed (Raiden had to rip it out of Armstrong's body and crush it with his hand to end the fight). His nanomachines can run out of power (Kojima claims Jetstream Sam could have won their match if he just tried holding out until Armstrong's nanomachines ran out of energy) and require immense amounts of power to activate fully (He drained multiple heavily armed military-grade helicopters during his fight with Sam and Metal Gear Excelsus' remaining energy during his battle with Raiden), Can get overconfident when he's sure he'll win.