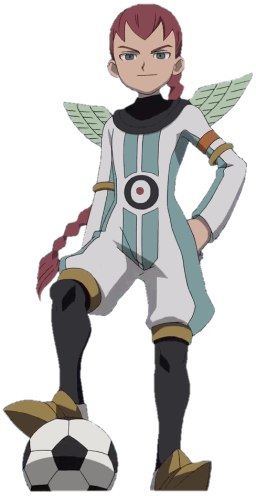 Sein, or Sanctus, is a character in Inazuma Eleven, of whom makes his first appearance in the third game and season (of the anime), and can be exclusively played in the Lightning Bolt edition. He is the captain of the Tenkuu no Shito (Messengers/Apostles of the Sky), and later becomes a forward in Dark Angels.

Sein is an angel, residing at Heaven’s Gate atop of Mt. Magneto on Liocott Island, whose job is to govern the skies and fend off the forces of Hell from plaguing the world, who they have been at war with for millennia, by resurrecting the Demon King. In order to do this, every Millenia, the angels must sacrifice a maiden, chosen by a magic white bracelet to marry the Demon Lord before the Makai Gundan Z (Hell Army Z) can sacrifice a maiden themselves. During the FFI tournament, a millennium had passed, as Sein was summoned to capture Urabe Rika to use as their sacrifice, powering his way through Inazuma Japan and other country representatives, and taking her to Heavens Gate. It wasn’t until Endou and his team who arrived shortly after had to play against the angels in order to save Rika, which they were able to do while also teaching Sein the fun aspects of soccer. However, after the Demon Lord had awoken thanks to the ‘courageous souls’ of Inazuma Japan, Sein and his time were mind controlled and forced to merge their team with Makai Gundan Z to create Dark Angel, of whom Endou and co. had to defeat. After doing so, Sein was freed from control and went back to Heaven’s Gate to prepare for the next millennia, thanking Endou for showing him the true value of Soccer.

Sein, as an angel, labels himself as a pure being, trying to protect the world from harmful entities like the Demon Lord, though has shown to be extremely cold and uncaring to anything that gets in the middle of his duties. He realizes that the hatred in his heart at those points of playing soccer for war is the Demon Lord sealed within everyone, and vows to not let it corrupt him once again by thinking of soccer as something fun rather than a means of battle. However, when corrupted by Desuta, he forcibly becomes just as cynical and evil as anyone from the Underworld, even expressing this after he momentarily broke out of the Demon King’s grasp.

Age: At least a Millennium.

Classification: Angel, Forward, No.11, and Captain of Tenkuu no Shito, No.11 of Dark Angel

Attack Potency: At least Large Town level+ (His Heaven Drive shot was able to burst a hole through multiple storm clouds initially, and then come back down with even more power, single-handedly took down Inazuma Japan, Edgar, Teres, Fideo, Mark and Dylan with a regular but powerful kick, though did not damage them gravely), most likely higher (Was responsible for the creation of a large storm that spread over the majority of Liocott Island at least) | Unknown, at least Large Town level+, likely higher (Much stronger after being corrupted and merged with Makai Gundan Z. Stated that the more souls the Demon King can consume, the stronger the Dark Angels will become)

Speed: At least Massively Hypersonic (Much faster than Dark Emperor Kazemaru as well as was able to blitz past Inazuma Japan, Able to summon bolts of lightning and disappear within them), much higher with Saints Flash (A Hissatsu tactic that increases the speed of Tenkuu no Shito, and is the opposite to Makai Gundan Z’s Black Thunder, which can summon black lightning and slow opponents to the point it looks like time is being slowed, as well as the lightning appearing static). | At least Massively Hypersonic (Faster than before)

Durability: At least Large Town level+ (Able to casually use Heaven Drive, which hurt players like Edgar Valtinas after reflecting it back with Excalibur. Comparable to Makai Gundan Z, who could take many soccer kicks head on from strong players) likely higher | Unknown, at least Large Town level+ (Stronger than before, Temporarily blocks the power of Endou's Megaton Head G3, and while he couldn't stop it, survived and got back up straight afterwards)

Intelligence: Most likely High (Captain of Tenkuu no Shito, whose job is to fend off the forces of Hell’s Makai Gundan Z in order to resurrect the Demon King, has lived for at least over a millennium and is extremely accurate and precise when playing soccer)

Weaknesses: Can underestimate those who are mortals, will succumb to the Demon King and corrupt if unable to stop its resurrection.

Retrieved from "https://vsbattles.fandom.com/wiki/Sein?oldid=4124352"
Community content is available under CC-BY-SA unless otherwise noted.