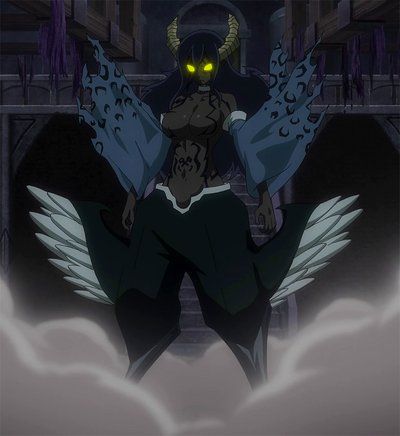 Seilah (セイラ Seira) is an Etherious of the Dark Guild Tartaros and its team: the Nine Demon Gates. Seilah is a calm and collected person who uses story chapter motifs in her speech. She has also displayed a cold and ruthless side to her as shown when she told Elfman that "mercy doesn't exist in the story of Demons" while forcing him to strangle Lisanna with her Curse. She is incredibly loyal, if not infatuated with Kyôka, blushing when she was praised for initially believing that she destroyed the mages of Fairy Tail, and referring to her with the honorific -sama. She also has a sense of pride as well as arrogance, shown when she planned to get revenge on Mirajane for ruining her reputation and shaming her in front of Kyôka.

Tier: 7-B, higher in Etherious Form

Name: Seilah The Goddess of the Chill Moon

Age: Unknown (Likely several hundred, but no more than 400)

Powers and Abilities: Superhuman Physical Characteristics, Immortality (Type 1), Mind Control via Macro (Controlling humans, objects, and corpses, if the target in question is genuinely sentient, it does not control their feelings and thoughts), Curse Manipulation (All Demons use curses as a source of their power and energy), Extrasensory Perception, Shapeshifting (into her true form), Telekinesis (Macro used on objects), Necromancy (Macro used on corpses), True Flight (in true form), Generating Blasts, Immortality (Type 1)

Durability: City level (Took hits from Satan Soul Mirajane), higher in Etherious Form (Should be comparable to her own power)

Weaknesses: She can't control demons with Macro, and can't use Macro in Etherious Form. Additionally, Devil Slayer Magic is more effective against her.

Notable Attacks/Techniques: Macro: This Curse allows Seilah to fully control the body of her victims and manipulate them as if she was giving "orders". She has demonstrated the capacity to control both corpses and living humans, even though she stated herself that corpses subjected to her Curse do not function well. Her powers aren't solely limited to bodies, however, as Seilah has also demonstrated the ability to manipulate and suspend objects with her hands, as shown in her fight with Mirajane Strauss in her basic Satan Soul, where Seilah assaulted her with a multitude of books, that levitated around her person.