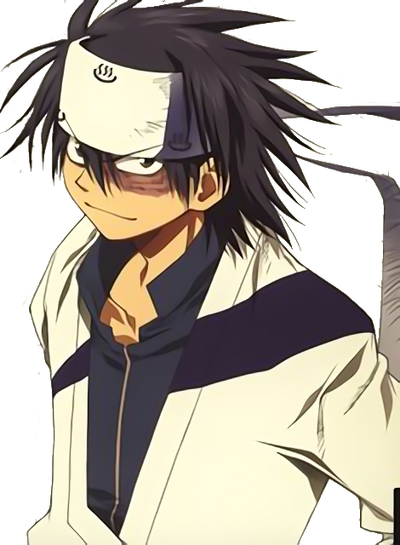 Seiichirō Sano is a 9th grader at Inaho Junior High School and a member of the team Ueki. He was known as the Genius of Robert's Ten while he was part of it. Like Ueki, Sano has a dutiful sense of justice that always urges him to help others; and because of this characteristic, Sano and Ueki see eye to eye.

Powers and Abilities: Superhuman Physical Characteristics, Power to change towels into steel, Expert in using weapons from his steel, Can induce magnetism into his steel

Speed: Subsonic+ (Should be comparable to Ueki) | FTL (Can keep up with 6-stars Ueki) | At least FTL (Should be faster than before)

Lifting Strength: Likely Class M (Should be comparable to Ueki)

Stamina: High (Able to fight several opponents for a long time while need to usually hold his breath to active his power)

Range: Extended melee range with his steels, tens of meters with his throwing weapons like spears or boomerangs

Standard Equipment: A lot of towels

Intelligence: Sano was known as the Genius of Robert's Ten. despite the fact that his power is so normal when compared to other power users, he can be creative with his power which gave him victories more than 30 times against other power users.

Weaknesses: He needs to hold his breath to active his power. He also is a reckless person who usually makes a quick move without careful thinking. Which makes his attacks have holes sometimes.

Retrieved from "https://vsbattles.fandom.com/wiki/Seiichir%C5%8D_Sano?oldid=5997808"
Community content is available under CC-BY-SA unless otherwise noted.