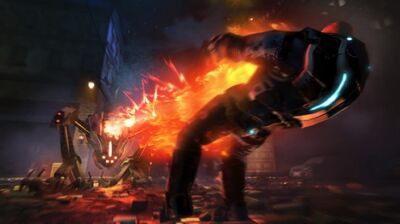 The Sectopod is a robotic combat unit/heavy weapons platform used by the aliens. Sectopods usually travel with 2-3 drones that can repair damage or attack foes.

Tier: At least 9-A with Cluster Bombs, 8-C with Cannon Fire

Intelligence: Is skilled in battle tactics. Is strategic when deciding on who to attack first. If the Sectopod is near death or feels outnumbered/out-gunned, it may retreat to an allied position to regroup.

Weaknesses: Susceptible to HEAT ammo, can be stunned for a short of time. Headshots have a higher chance to do critical damage.

Feats: Can absorb focused electrical energy to repair damage (this is done by drones), has reinforced armor that reduces damage, is hardened reducing chances of a critical hit. Immune to fire/poison/venom and psionic mind attacks, and can’t be hacked.

Note: This Sectopod is the version from XCOM EU/EW and is considered non-canon as it is assumed that XCOM never fought this unit.