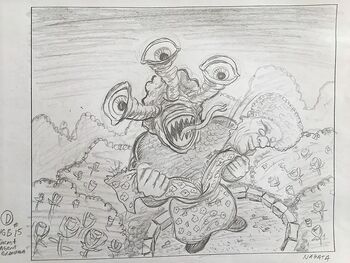 The Secret Agent Aliens are a race of aliens that have invaded earth and are planning on taking over the world by disguising themselves as humans, one of them being the main character’s grandmother. Their only appearance is from the Goosebumps book Secret Agent Grandma.

Tier: 10-B Physically, higher with Acid Spitting | Far higher then before

Territory: A number of solar systems across the galaxy

Technology and Abilities: Can disguise themselves as other species, Genius Intelligence, Acid Spitting (Can spit acid strong enough to melt a entire bed and 3 children), Plant Minions (Have control over mutated plants that can turn others into plants, use their tendrils as weapons, and are capable of killing and devouring humans with ease), Precognition (Somehow made video games that would come out the next year before they were made), Mind Manipulation via mind-control rays, Can create alien eggs, Electricity Manipulation and Power Nullification (Can shoot out short-circuits from their finger tips that can shut off technology and make forcefields disapear) | All prior abilities to a higher extend plus Spaceflight, Forcefield Creation, Technology Manipulation

Attack Potency: Human level Physically (Haven't shown any feats beyond the average human), higher Acid (Melted a entire bed and 3 children all at once) | Far higher then before (Were capable of taking over multiple solar systems for a unknown amount of time. Some specific individuals own entire solar systems)

Intelligence: Extraordinary genius (Have technology far beyond what is possible with modern technology. Have managed to gain control over several solar systems and trade with other colonies)

Weaknesses: Can explode if exposed to music

Key: Base | With techology

Retrieved from "https://vsbattles.fandom.com/wiki/Secret_Agent_Aliens_(Goosebumps)?oldid=5445386"
Community content is available under CC-BY-SA unless otherwise noted.