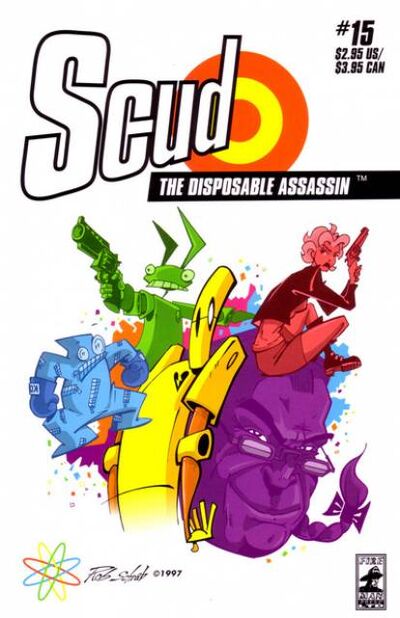 Scud: The Disposable Assassin is a humorous, hyperkinetic science fiction comic by Rob Schrab about a world in which one can buy robot assassins out of vending machines, the most popular of which are intelligent robots that kill a specified target and then self-destruct. The protagonist of the series is Scud, an average Heart Breaker Series 1373 model assassin. On his first mission, he is sent to kill Jeff, a rampaging female mutant with mousetraps for hands, an electrical plug for a head, and a squid for a belt.

The Scud universe has many instances of cartoon physics and hammer space. Characters are capable of raising the undead, traveling through time, and doing other ridiculous things. They can also do lots of physical damage, such as destroying buildings and eating the moon.

Start a Discussion Discussions about Scud the Disposable Assassin (Verse)