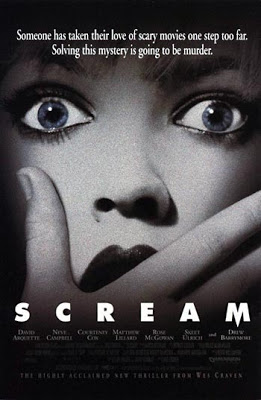 For more information about the verse, see the Scream Wiki.

The Scream franchise is a series of mystery/slasher films that follow Sidney Prescott (among other characters) surviving against a serial killer known as Ghostface in the town of Springwood. Ghostface is a different person in each installment, each with one reason or another to try to kill Sidney. In 2015, MTV made a spin-off TV series focusing on the town of Lakewood and a new killer altogether.

The Scream series peaks at street level+ (via the Lakewood Slasher breaking a man’s neck 180 degrees), wall level with preparation, with most characters having no extraordinary powers or strength. Only characters to have any abilities is the Ghostface from the mobile game, who can turn invisible (via Ghostmode). The verse also includes semi-futuristic technology, such as a voice changer that can perfectly match the voice of anyone. The killers are generally the more powerful characters in the franchise.