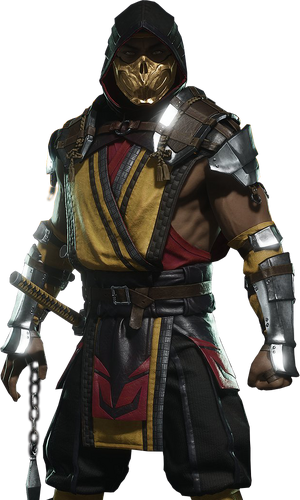 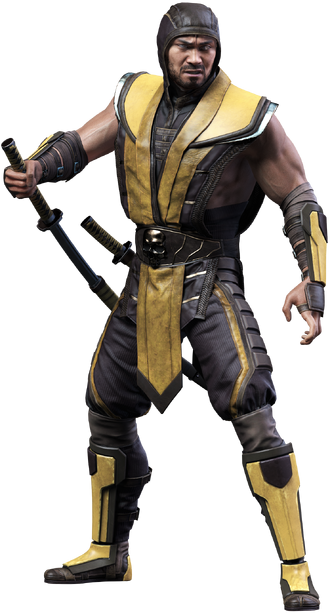 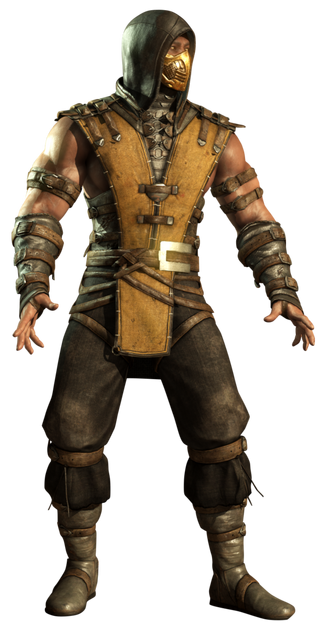 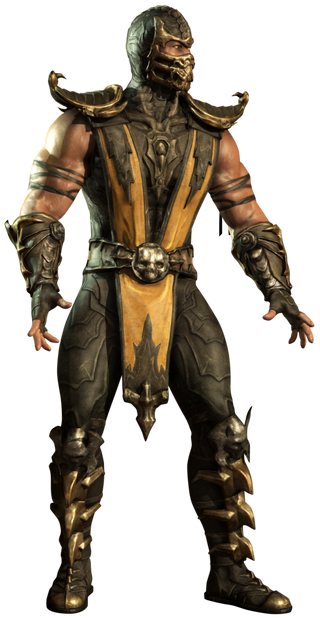 Hanzo Hasashi, commonly known as Scorpion, was one of the best shinobi of the Japanese Shirai Ryu ninja clan and fought for the glory of his clan's Grand Master. However, one day, he is killed alongside his family and clan by the Lin Kuei warrior, Sub-Zero. After being resurrected by Quan Chi, he would enter the Mortal Kombat to kill Sub-Zero and successfully did so.

Hanzo was given the name Scorpion for his ridiculously fast speed in combat and skill with the spear; however, his inner demon has also taken up this name for himself.

In both timelines, Scorpion has made peace with the younger Sub-Zero, Kuai Liang. He has vowed to protect him to atone for murdering Bi-Han, the elder Sub-Zero. The current timeline shows both of them making peace as grandmasters of their respective clans and uniting forces with each other. One thing has remained in common; it was Quan Chi, who indeed was responsible for the death and destruction of the first Shirai Ryu clan as well as Scorpion's family.

Only in the current timeline did Scorpion manage to avenge the memory of his beloved clan and family.

Superhuman Physical Characteristics (Possesses superhuman strength allowing him to crush skulls and stone, tear-off spines from cyborgs, rip away heads, twist necks at 360 degrees, etc.), Martial Arts (Ninjutsu, Kenjutsu, Iaijutsu, Hapkido, Moi Fah, Pi Gua), Weapon Mastery (Wields swords, daggers, whips and hatchets), Acrobatics (Exercises enhanced condition and hypermobility. Can jump far distances, rotate while airborne perform multiple attacks in mid-air, etc.), Immortality (Types 1, 2, 4 and 7), Resurrection (Can revive himself upon death), Hellfire Manipulation (Able to generate and manipulate hellfire), Breath Attack (Able to breathe out hellfire), Teleportation (Can instantly teleport himself and others), BFR (Can teleport others to the fifth plane of the Netherrealm, where their strength will be drained and powers and fighting skills removed while he grows more powerful with each passing moment), Extrasensory Perception (Able to detect Netherrealm taint in one's soul), Enhanced Senses (Can sense presences from afar), Portal Creation (Able to summon portals that lead to the Netherrealm), Aura (Can cover himself in fire), Flight (Pseudo flight), Earth Manipulation (Can summon a large stone monolith), Plant Manipulation (Can summon a sharp log), Dimensional Storage (Able to conceal a hundred feet long chain in his gauntlets. Pulls his kunai from thin air), Self-Sustenance (Type 2), Resistance to Hellfire (Unaffected by his own element), Corruption and Transmutation (Can endure being in the 5th plane of the Netherealm, which can twist any being into a vicious monster by affecting their souls. For instance, after an intense battle in the Netherrealm, Sareena lost control of her human form due to the realm's dark energy), Soul Manipulation (He was thrown into a big Soulnado, but did not lose his soul to it)

All previous abilities enhanced, Blessed (Has been given enhanced abilities by the Elder Gods), Necromancy (Can summon the undead Shirai Ryu ninjas who have their own hellfire powers), Summoning (Can summon Skull creatures that can spit hellfire and explosive projectiles)

All previous abilities enhanced, Soul Manipulation (After having his soul split by Quan Chi's dark magic, he is able to switch between Scorpion, a spectre conjured from his own soul and back to his human self), Multiple Personalities (Loses his composure and becomes full of rage when switching to Scorpion, a separate demonic entity full of anger and vengeance), Self-Destruction (Can cause his demonic minions to explode, creating fiery explosion), Regeneration (Low-Mid. Was able to heal multiple holes through the chest as Scorpion. Healed from being stabbed throughthe heart), Chain Manipulation (Threw a chained spear from the ground at Scorpion. His demonic self can do the same as well), Resistance to Ice Manipulation (Can resist being frozen solid by an enhanced Sub-Zero's cryomancy), Poison Manipulation (Resisted the venomous ovipositors from a weaker D'Vorah), Mind Manipulation (Resisted his own poisons that causes mental entropy ), Perception Manipulation (Burned away a hallucination), Electricity Manipulation (Tanked Raiden's electrocutions and eventually broke free from it)

All previous abilities enhanced, no longer has the following: Self-Sustenance (Type 2), Immortality (Types 1, 2 and 7), Soul Manipulation and Multiple Personalities (Cannot switch to Scorpion due to killing him)

Attack Potency: Large Building level (Defeated Bi-Han before utterly vaporizing him save for his spine. Heavily wounded Kuai Liang but ultimately lost to him) | Large Building level, likely higher (After escaping to the Void, he was given enhanced powers by The Elder Gods to defeat Onaga. Fought against Shujinko) | City level (Is able to harm Raiden and was prepared to kill him in the MKX Comic. Fought and defeated Kuai Liang twice and killed Quan Chi, who had him in high regard. Brutally killed Havik) | City level (Stronger than before. Comparable to Raiden, Sub-Zero and Liu Kang. Fought stronger versions of Cyrax, Sektor, Frost and Noob Saibot)

Range: Standard melee range, Hundreds of meters with his spear, Higher with portals and teleportation

Intelligence: Gifted (Strong-willed fighter and is the mentor of Takeda and many Shirai Ryu members, should be comparable to other clan leaders such as Kuai Liang)

Weaknesses: He must be in the Netherrealm to be at his strongest. He can be permanently destroyed by throwing him into a soulnado (which is a portal to heaven), and he will be torn apart by the purity of the soulnado and the souls trapped in it, although he has escaped this kind of encounter before. 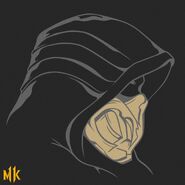 Scorpion in his clothing from Deadly Alliance.

Hanzo Hasashi
Add a photo to this gallery

Get Over Here.
Add a photo to this gallery

Unchained.
Add a photo to this gallery