VS Battles Wiki
Register
Don't have an account?
Sign In
Advertisement
in: Tier 9, Tier 9-C, Tier 6,
and 64 more 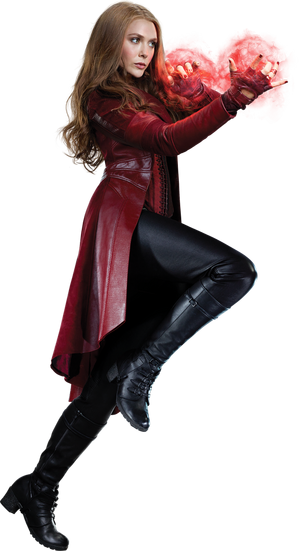 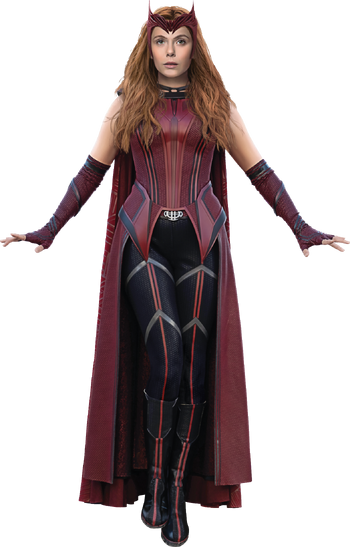 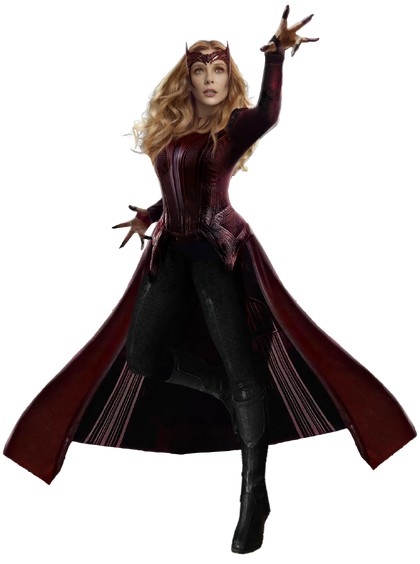 WARNING: This article contains spoilers for Doctor Strange in the Multiverse of Madness.

Wanda Maximoff is a native of the Eastern European country of Sokovia who grew up with her twin brother, Pietro. In an effort to help purge their country of strife, the twins agreed to undergo experiments with the Scepter under the supervision of HYDRA. They achieved superpowers as a result, with Wanda attaining various telekinetic and telepathic abilities. When HYDRA fell, the twins joined the robot Ultron to get their revenge on Tony Stark, but eventually switched sides and joined the Avengers when they discovered Ultron's true intentions. Although Pietro was killed, Wanda survived and became a member of the Avengers.

She fought alongside Captain America in Civil War before being arrested and imprisoned in the Raft. Captain America, however, set her free, and she fled with Vision. She joined the fight to protect Vision and the Mind Stone from Thanos after encountering the Black Order and being rescued by Falcon, Black Widow, and Captain America. Nonetheless, Thanos overpowered them and seized Vision's Mind Stone, subsequently resulting in his death. With the completed Infinity Stones, Thanos wiped out half of all life in the universe, including Wanda. Five years later, Wanda and the rest of erased lives were restored by Hulk using the Infinity Stones, and she took part in the Battle of Earth before going her separate way.

Vision's body was later retrieved by SWORD and disassembled. Upon learning this, Wanda was overcome with deep sorrow, inadvertently warping the town of Westview into a sitcom-styled dream world in which she lives happily with Vision and their 2 children Tommy and Billy. Her action gains the attention of SWORD Acting Director Tyler Hayward and a mysterious witch named Agatha Harkness. She reveals to Wanda that she is the Scarlet Witch, a mythical being with power surpassing that of the Sorcerer Supreme's. After defeating Agatha and freeing Westview by giving up on her dream world, Wanda isolates herself in the mountains to learn more about her powers.

Later on, Wanda is approached by Doctor Strange, who requests Wanda's assistance with America Chavez, a mysterious girl who is being pursued by dark creatures who desire to steal her power. After accidently giving away her facade, Wanda reveals she has been using the Darkhold to send those creatures after Chavez to seize control of the power for herself. Knowing that there are alternate universes in which Tommy and Billy are real, Wanda desires to move to one of these universes to permanently live with her family by any means necessary. However, knowing the dangers of allowing the Scarlet Witch to traverse the multiverse, the Masters of the Mystic Arts refuse Wanda's request to hand over America, instigating a conflict that will determine the fate of the entire multiverse.

Age: 30 during her apparent death

Superhuman Physical Characteristics, Energy Manipulation, Magic, Chaos Manipulation (Agatha Harkness revealed Wanda's powers were chaos magic), Waves and Shields, Telekinesis, Flight (via Levitation, Maximoff was able to use this power to move through the air and simulate flight, to hover and safely float back to the ground. The use of this power manifests as a blast of energy expelled from her hands onto the ground to propel herself up in the air), Telepathy, Mind Manipulation, Fear Manipulation, Probability Manipulation (Stopped a bomb with Probability Hex as a child), limited degree of Hand-to-hand combat skills (Was trained by Captain America and Black Widow), Enhanced Senses (Sensed her brother's death), Resistance to Mind Manipulation and Purification (Her zombie self of another universe was unaffected by the powers of the Mind Stone)

All previous abilities to a far greater extent, Pocket Reality Manipulation (Encased the town of Westview into a pocket reality), Far stronger Mind Manipulation (Mind controlled nearly everyone in the town of Westview, which has a listed population of 3,892 people), Memory Manipulation (Known friends and relatives of missing people trapped in Westview were unable to remember them), Empathic Manipulation (Side effect of Mind Manipulation), Dream Manipulation (Westview residents shared Wanda's nightmares), Possible Pain Manipulation (Westview residents could share Wanda's "pain," but it's unknown if this is merely figurative), Clairvoyance, Biological Manipulation (remove Blackbolt's mouth from his body. Speed up the decay of Defender Strange's corpse) Matter Manipulation (Changed Monica's cells on a molecular level when passing through the Hex), Limited Power Bestowal (Monica gained powers after passing the Hex a third time), Illusion Creation (Stated to be running illusions passively at the edge of town), Limited Power Nullification (Can cast a protection spell which prevents the use of magic in a limited area except for the person who cast the spell), Weather Manipulation, Absorption and Power Absorption (Absorbed her magic back from Agatha Harkness, leaving her powerless afterwards. Was in the process of stealing and absorbing America's powers, which would have killed her if successful), Teleportation (On herself and others), Astral Projection (Was seen reading the Darkhold in an astral form while boiling tea with her physical body), Transformation, Reality Warping and Plot Manipulation, Time Manipulation (Shown here), Transmutation (Can change a piano into cardboard and instantly changes clothing with a snap, and anything that passes through the hex instantly changes to fit the time period), Creation (Can create mirrors, wedding rings, and jackets out of thin air. Said to be a being capable of spontaneous creation), , Air Manipulation (Can summon gusts of wind), Light Manipulation (Can change the colors of her pocket reality from 1950's black and white to a 1970's sitcom with colors), Life Manipulation (Impregnated herself, made a painting of a stork into a real one, turned a ceiling hangar of fake butterflies into a swarm of real ones), Technology Manipulation and Metal Manipulation (Entirely recreated The Vision with all his previous powers, appearance, and personality. Prevented Christine from releasing Chavez by glitching the control panel), further Resistance to Mind Manipulation (Snapped out of Agatha's mind once she began to take control)

All previous abilities to a far greater extent. Extrasensory Perception (She could actively sense and track where Chavez was and in what specific universe she was in throughout the entire film while also being able to sense and track her and strange after they already escaped her initially in the Illuminati base), Portal Creation (Could attack sorcerers through reflections and escape the mirror dimension), Regeneration (Low-Mid, instantly healed her huge cuts and contorted body she received while escaping the Mirror Dimension), Summoning (Summoned various monsters from across the multiverse to hunt America Chavez), Existence Erasure (Erased every Darkhold from the infinite multiverse) and Deconstruction (Made an injured sorcerer turn to a cloud of dust), Resistance to Soul Manipulation (Withstood the souls of the damned attempting to take her soul), Possession (Was in control and able to fight off the souls of the damned while they were in her body), and Heat Manipulation (Shrugged off being burned by Kamar Taj cannon)

Astral Projection and Possession (Through Dreamwalking, Wanda is able to project her consciousness across the multiverse in order to possess and control the bodies of alternate versions of herself.

Attack Potency: Street level physically (Was trained in physical combat and should be superior to the average human). Large Island level with Magic (Capable of restraining Vision and sending him through several floors, casually tore out Vibranium Ultron's core) | Street level physically. At least Large Island level with Magic (Single-handedly pushed back Thanos with an energy blast for a considerable amount of time when destroying the Mind Stone at the same time, despite Thanos shielding himself with a barrier, with the Titan even breathing heavily after overpowering her. Later in Endgame, she severely overwhelmed Thanos again, destroying his sword and armor, causing him to call in bombardment in fear, and according to Kevin Feige would have killed him. Capable of destroying the Mind Stone, as her powers are of a comparable level to the Stone's own) | Street level physically. At least Large Island level with Magic (Much more powerful than before) | Building level physically (Should be comparable, if not superior, to Doctor Strange in strength. Fought against an alternate version of Captain Carter). At least Large Island level with Magic, likey far higher (Has grown exponentially in power after becoming the Scarlet Witch and studying the Darkhold being much more powerful than before. Stated to be stronger than the Sorcerer Supreme, making her stronger than any sorcerer including Doctor Strange, with Strange himself admitting he had no way of fighting her. Could easily destroy the dragons that Strange conjured, and knocked out Wong. Even possessing a less powerful version of herself incapable of using her full power as stated by WoG, Strange and the Illuminati were helpless to do anything to stop her. Easily overpowered a variant of herself.)

Range: Standard melee range, Dozens to Hundreds of meters with Magic Blasts | Standard melee range, At least kilometres with Magic Blasts and Reality Warping (Created a pocket reality which encased the entire town of Westview in it. She later expanded this pocket reality much further. Her magic blasts can easily reach the borders of this pocket reality). | Standard melee range, At least kilometers with Magic Blasts and Reality Warping (Is much stronger than before and can casually create large pocket realities). Multiversal+ with Dreamwalking, Existence Erasure, Summoning, and Extrasensory Perception (Was able to possess and manipulate Wanda from another timeline, destroy every Darkhold throughout the infinite multiverse, and Summon different entities to hunt down America Chavez throughout the multiverse, could actively sense and track where Chavez was and in what specific universe she was in while also being able to sense and track her and strange after they already escaped her initially in the Illuminati base)

Intelligence: Gifted. Wanda has a few years of experience fighting alongside The Avengers and has greatly improved her powers. She and Vision were able to lie low off the radar for two years. Able to quickly learn spells such as the protection spell by simply viewing the runes from Agatha Harkness. At the end of WandaVision, she is seen studying the Darkhold and expanding her knowledge of her powers. Knows English, Sanskrit and Sokovian. | During the events of Multiverse of Madness, Wanda has become significantly more knowledgeable after studying the Darkhold and its secrets.

Weaknesses: Until Multiverse of Madness, despite being the most powerful Avenger offensively, Wanda's defense was the weakest (excluding her shields) and had standard human weaknesses. From Age of Ultron to Civil War, she was both the youngest and least experienced Avenger and is still in training and hadn't even come close to discovering her true potential. She cannot defend herself against threats she is not aware of. Destroying the Darkhold prevents Wanda from Dreamwalking as the book is required to do so. In Multiverse of Madness, she is mentally unstable.

Key: New to her powers | Infinity War and Endgame | WandaVision | Multiverse of Madness

Note: Wanda cannot be scaled to High 3-A since she used a hax rather than her own raw magic power to destroy every Darkhold in the Multiverse.

Thanos (Marvel Cinematic Universe) Thanos' Profile (Speed was equalized, Thanos had the Infinity Gauntlet and was in his Endgame mindset, WandaVision Scarlet Witch was used)