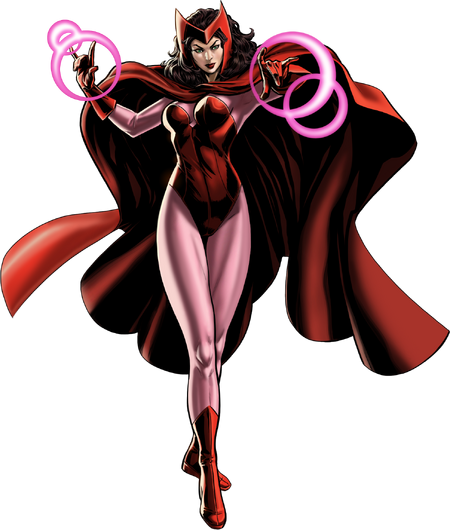 The Scarlet Witch (Wanda Maximoff) is a fictional comic book superhero that appears in books published by Marvel Comics. The character first appeared in X-Men #4 (March 1964) and was created by Stan Lee and Jack Kirby. She has since starred in two self-titled limited series with husband the Vision and appears as a regular team member in superhero title the Avengers.

Within the Marvel Universe, Scarlet Witch was established to be a mutant, born with the ability to alter reality in unspecific ways. She is the twin sister of Quicksilver and used to be the daughter of Magneto and the paternal half-sister of Polaris.

However, she was later retconned into having received her powers through experimentation by the High Evolutionary.

Classification: Formerly Human Mutant. Retconned into being a creation of the High Evolutionary.

Stamina Manipulation (Shown here), Made Hope miss her punch, Technology Manipulation (Made Ultron's circuits disrupt and his molecular rearranger malfunction), Gravity Manipulation (As seen here), Pain Manipulation (Performed against Nefaria), Vector Manipulation (Made an arrow lose all momentum), Made Hawkeye's bowstring randomly snap, Manipulated Iceman and Beast's equilibriums, Made a swordsman lose his grip and caused Quicksilver to fall over, Caused a robot and Cyclops to fall over as well, Creation Created a still grider

All previous abilities enhanced to an exponentially greater extent, Mind Manipulation & Resurrection (Caused Jack of Hearts to blow himself up after bringing him back to life), Existence Erasure (Accidentally erased Hawkeye from existence), Creation (Created a Kree armada), Life Manipulation (Restored her brother's life force), Power Nullification (Depowered 95% of mutants across the multiverse), Clairvoyance (Can see others on a set of blocks)

Attack Potency: Solar System level (Fought against an enraged Thor, though she was injured and only able to BFR him. Was able to damage and fling away She-Hulk), Multiverse level+, possibly Low Complex Multiverse level with preparation (Stated that she could replicate her multiverse-wide mutant-negation feat again with enough time and a great enough source of power. Seemingly erased the Phoenix Force from existence with the help of Hope Summers) | Multiverse level+ (Depowered mutants all across the multiverse, in the process forming cracks along all realities. Created the House of M reality and wove her spell into all existence. Her Chaos Magic was stated to equal The Phoenix Force. Stated by Doctor Doom to surpass the Cosmic Cube Beyonder)

Intelligence: Above Average. Is a very talented sorceress and has been acknowledged by Doctor Strange. Has been trained in hand-to-hand combat by Cable. Has extensive experience fighting with groups like the Avengers and the Brotherhood of Mutants. Has learned to control her by nature chaotic powers.

Weaknesses: None notable | Mentally unstable, does not have full control of her powers

In Uncanny X-Men #465, Wanda’s creation of the House of M reality itself was stated to be a threat to the multiverse, it was not only her mutant eradication feat.