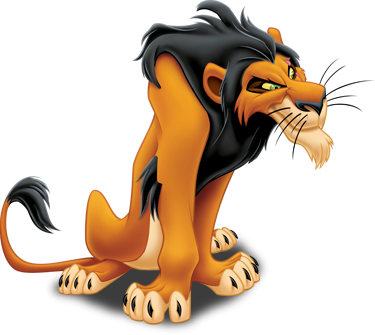 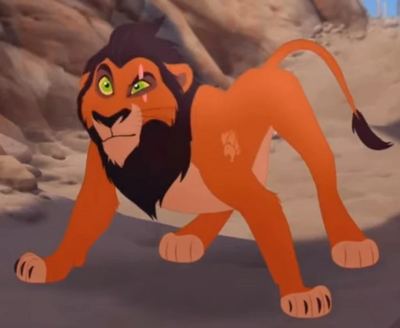 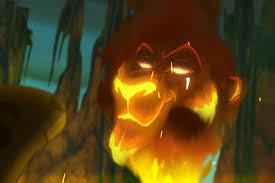 Scar is the main antagonist of The Lion King, and the brother of Mufasa. Scar kills Mufasa so that he can become king, but years later Simba fights and defeats him, becoming the rightful king of the Pridelands.

He was also a former leader of the Lion Guard right before Kion, but it dismantled after he used the roar for evil. After being re-incarnated as a spirit in a volcano, he leads members of the Outlands to a plan of taking over the Pridelands.

Age: Unknown, can be considered old for a lion

Attack Potency: Wall level (Held his own against the likes of Simba, a younger, more physically fit male African lion). | Wall level (Likely same as before, maybe weaker); At least City level with the Roar of the Elders (As the former leader of the Lion Guard, he was able to use the Roar of the Elders just like Kion) | Unknown (Never attacked anyone and it is unknown if he could have)

Speed: Superhuman (Real lions can run up to 50 MPH) | Superhuman (Same as before) | Unknown. He is seemingly immobile most of the time, although he can teleport anywhere where there is fire

Stamina: High (Didn't tire out from facing off against Simba) | High (was able to hold out despite being scarred by snakebite) | Very high, possibly limitless as a non-corporeal spirit

Intelligence: High (Organized the death of Mufasa and made Simba think he was responsible, commanded an army of hyenas, capable of manipulating situations and conversations to his advantage, his threat as a spirit came solely from his intelligence, as he was a very capable strategist and could lead the animals of the Outlands in an attack on the Pride Lands, constantly made back up plans)

Weaknesses: Inexperienced with combat compared to Mufasa. | Once he used the roar for evil, he lost the power for good | Needs fire to be around for him to manifest, doesn't move much, may not be capable of physically attacking, can be destroyed if the Great Kings of the Past are summoned

Start a Discussion Discussions about Scar (The Lion King)