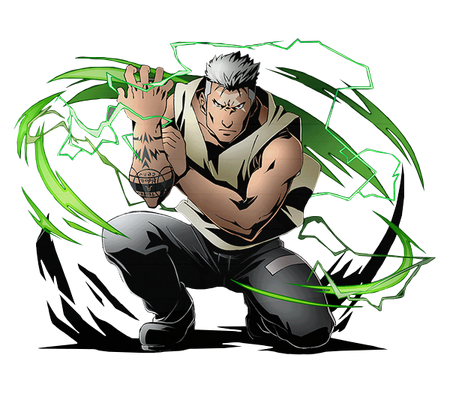 The Scarred Man (傷の男, Kizu no Otoko), known more casually as "Scar" (スカー, Suka), is a nameless lone serial killer and revolutionary who targets State Alchemists for his own brand of lethal justice in accordance with the fundamental tenets of his religion and for the revenge of his slaughtered people and his older brother. An Ishvalan survivor of the Ishval Civil War, Scar's moniker comes from the large X-shaped scar on his forehead and sports a conspicuous and intricate alchemical tattoo on his right arm, which originally belonged to his brother, and which he uses as his murder weapon of choice.

Attack Potency: Building level (Can match blows with Edward). Large Building level with alchemy (Comparable to other alchemists), can ignore conventional durability with Decomposition Alchemy (Destroys the atomic bonds that hold the target together)

Speed: At least Supersonic+ (Can keep up with Edward and Kimblee) to Hypersonic (He was able to keep up with a weakened Wrath)

Durability: Building level (Can take hits from both of the Elric Brothers)

Intelligence: Above average. Skilled martial artist thanks to his monk training and later, he took up his brother's studies and became an expert in Alchemy and Alkahestry.

Retrieved from "https://vsbattles.fandom.com/wiki/Scar_(Fullmetal_Alchemist)?oldid=6532665"
Community content is available under CC-BY-SA unless otherwise noted.