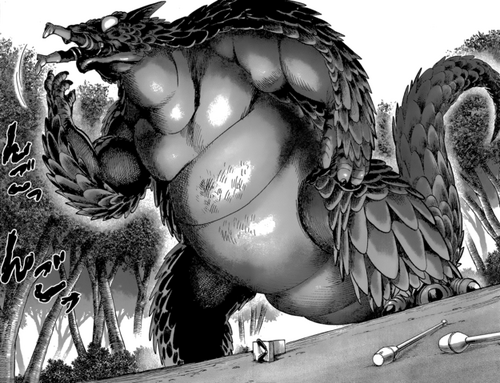 Scaledon (ウロコドン, Urokodon) was a Mysterious Being that escaped from the Hero Association's facility. It can be considered the main antagonist of the Squadron extra chapter.

Scaledon had been captured for study and exploitation by Metal Knight then handed to a to former coordinator of the Z-City Heroes association Branch who intended to sell its scales to a collector of monsters. But the creatures new feeding habits while in its sheltered environment caused it to mutate into a more vicious form breaking free from containment eventually escaping into forest which divides Cities Z and Y.

Attack Potency: City Block level (As a Demon level threat should be superior to Kombu Infinity)

Retrieved from "https://vsbattles.fandom.com/wiki/Scaledon?oldid=5924615"
Community content is available under CC-BY-SA unless otherwise noted.