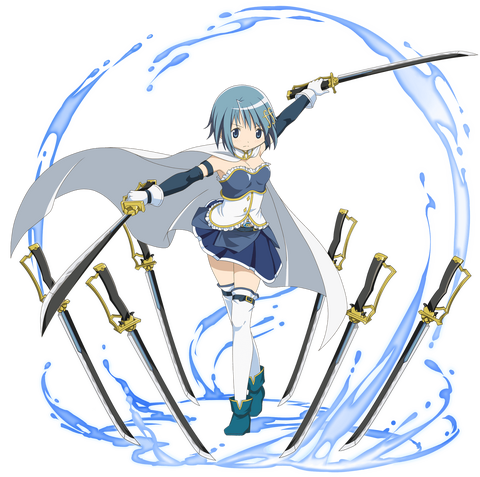 The best friend of Madoka Kaname and Hitomi, Sayaka was bound to inevitably become a magical girl; even if she had the least potential. Despite being regarded as the weakest magical girl, her regeneration and later ability to control her witch form (as well as others), allowed her to take on witches and magical girls of incredible power and ability. In short, she is not to be underestimated.

All of the above, Immortality (Type 8, dependant on water), Mind Manipulation, Soul Removal, Pocket Reality Manipulation, Reality Warping, Familiar Summoning, Absorption, Curse Manipulation, Invisibility, Self-Resurrection (Able to resurrect from her Grief Seed, although this isn't applicable for combat unless the Grief Seed is filled with despair), Immunity to Soul Manipulation (Lacks a soul)

All previous abilities (Witch abilities are only accessable as Doppel Oktavia), except for Self-Resurrection and Immunity to Soul Manipulation; Awakened Power, chance of Empathic Manipulation, Paint Manipulation, and Statistics Amplification (Attack Potency & Durability)

The abilities from the first two forms, Immortality (Type 8. Is a part of the Law of Cycle), Acausality (Type 1. Kept her memories after the universal reset caused by Homura Akemi at the end of Rebellion), Summoning (Can summon Oktavia von Seckendorff), Blessed (From Ultimate Madoka), Cosmic Awareness (Is a part of the consciousness of Ultimate Madoka and share her awareness of other timelines), Regeneration (Low-Godly, Nagisa Momoe was stated in her Magia Record to be capable of becoming physical from just being a soul, Sayaka as a LoC Assistant should be able to do the same). Resistance to the following: Power Nullification, Power Mimicry, Power Absorption, Power Modification (Her power directly come from Ultimate Madoka), improved Mind Manipulation Resistance (Being a part of the Law of Cycle and share her awareness as well)

Attack Potency: At least Town level (Killed H.N. Elly and collapsed her labyrinth with a single attack.) | City level (Somewhat comparable to Kyoko Sakura, despite being weaker) | At least Town level (As of Chapter 10, all the magical girls have been enhanced by Mitama at least once), City level as Doppel Oktavia. | At least City level (Is both Oktavia and Sayaka at the same time), possibly Island level (Easily cut through Mami's ribbons, which were capable of restraining Walpurgisnacht temporarily in Magia Record.)

Speed: At least Massively Hypersonic (Can outspeed Homura Akemi easily in reactions, even with Homura's Time Stop) as Sayaka, Massively Hypersonic+ as Oktavia and Doppel Oktavia (Far above her magical girl form. Can take on a semi-serious Kyoko Sakura.)

Durability: Town level (Survived attacks from Elly. Regeneration makes her hard to kill.) | City level (Superior to her previous form, her regeneration makes it practically impossible to kill her without AoE attacks. Should be able to tank her own attacks. Required Kyoko's strongest attack to be defeated) | At least Town level, City level as Doppel Oktavia. | Unknown as Sayaka, At least City level, possibly Island level as Oktavia.

Stamina: Extremely High (Has shown to blitz witches even without a limb or two, kept fighting for days without cleaning her Soul Gem, even while she was falling into despair and abusing her regeneration powers, accelerating the corruption further. As a normal magical girl, she will transform into a witch if her stamina were to deplete, however.) | Likely Limitless as a witch. | Extremely High, her stamina is restored every time she reverts from her doppel transformation.

Range: Extended melee range, several hundreds of meters with Stinger and Sleep Manipulation. Her soul gem possesses her body up to 100 meters. Interdimensional with Extrasensory Perception (All magical girls can detect witches location from outside of their barriers) | Interdimensional (Every witches are capable affecting people outside of their own labyrinth, which located on different dimension from the real World). | Several Kilometers with sheer production of familiars.

Intelligence: Initially slightly Below Average (Has shown to be very emotional and often puts herself at risk for no reason, however she is still a capable fighter able to take on witches), Above Average as of Homura's Revenge (Trained under Kyoko Sakura and took tips from Kyubey, managed to trick Homura Akemi into believing she was dead twice.) | Lower as Oktavia | Above Average (Has steadily gained experience through the course of Magia Record, with one of her first fights being against Holy Mami.) | Extremely High (As of becoming an assistant of Madoka, she has knowledge of previous and present timelines, making her exceptionally skilled and intelligent to a Superhuman degree).

Weaknesses: Stubborn, impulsive, considered to be the weakest Magical Girl. Pain Nullification dulls senses and decreases reaction time by some degree, destroying her Soul Gem would kill her immediately. | None notable | The doppel transformation only lasts for a few moments. | None Notable

Note: Despite having Ultimate Madoka's memories and powers, she did not demonstrate anything ear her capabilities and was not a crystallized magical girl herself. Thus, it is unlikely that she can actually manifest said memories as power, as explained in Wraith Arc. 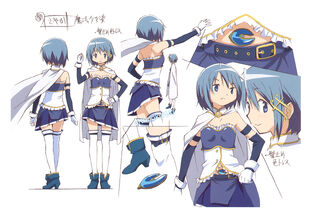 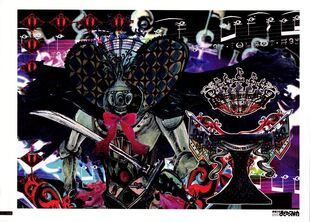