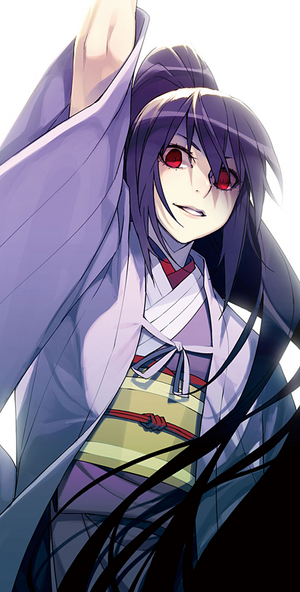 Saya Terumi is a mysterious girl that is the younger sister of Naoto Kurogane and the cousin of Haruka Hayami. Her Drive is Soul Eater. Due to her frail body and Drive, her life-force value changes constantly, with the only shown value being 7946. At first glance Saya seems like a normal girl with good manners and polite speech, but beneath that appearance she is someone that will use deadly force with no hesitation in order to get rid of obstacles. She is proud of being part of the Terumi family despite being responsible for its destruction, and is even obsessed with it to the point she will kill her brother to revive it, even though she shows anger of hearing Naoto being killed by Spinner’s bugs and Valkenhayn Hellsing, possibly because she wanted to kill him herself.

Powers and Abilities: Master Swordswoman, Superhuman Physical Characteristics and Statistics Amplification (With Soul Eater, she can increase her strength to massive degree), Power Absorption (Can take other people's powers), Life Absorption, Healing and Soul Manipulation (With Soul Eater, she can drain life and add it to her own, she can also use it to devour souls), Statistics Reduction (People that can destroy planets are getting strangled by her despite her frail human body when she uses Soul Eater) and Possible Sealing (Terumi family is stated to be a part of family specialized in Sealing, that being Amanohokosaka family)

Attack Potency: Below Average level normally (Is a normal girl with a frail body, low life force and prone to diseases). Large Planet level with Soul Eater (Amplified her power to the point that she can fight one-on-one against Valkenhayn). Able to ignore conventional durability with Soul Eater.

Speed: FTL Combat Speed normally (Reacted to Raquel's attacks and strangled Naoto before he could react). At least FTL with Soul Eater (Fought against Valkenhayn and kept up with him)

Stamina: Below Average normally (Is quick to get tired). High while using Soul Eater (Jump around and matched Valkenhayn without tiring)

Intelligence: Average (While she is extremely good at killing, Naoto stated that she is uneducated to anything else)

Weaknesses: She can use Soul Eater to amplify herself up to three minutes, and become completely exhausted after that. Obsessed with killing Naoto. She is prone to sickness and quite weak overall.

Retrieved from "https://vsbattles.fandom.com/wiki/Saya_Terumi?oldid=5541464"
Community content is available under CC-BY-SA unless otherwise noted.