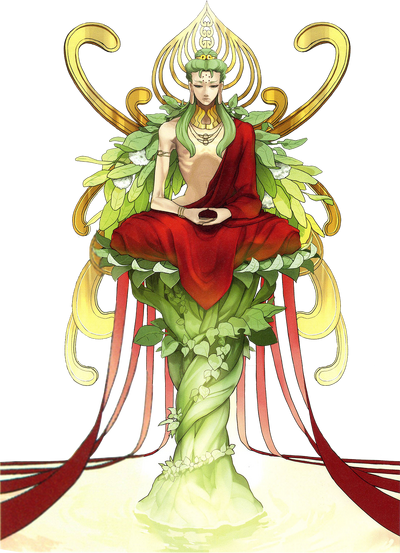 Saver is a "messiah" type Servant, summoned by the Moon Cell Automaton. He acted as the second Servant of Twice H. Pieceman, due to their similar ideals. Saver responded to the summon, and while he loathes wars, he follows Twice's orders to see him through his salvation, as he cannot turn away one in anguish. His true name is Buddha, the messiah who led the path of enlightenment and Buddhahood, and he is a Bodhisattva, a God of cosmic proportions, capable of governing solar systems.

More specifically, he is Shakyamuni, the most famous Buddha, who became Buddha through self-realization and was released from all pain and suffering while still alive. His teachings are the basis of Buddhism, but the path of enlightenment varies from person to person. Be they good or evil, all can be freed from suffering and achieve Buddhahood. Eventually, all of humanity will achieve salvation.

Tier: Low 7-B, higher with Chakravartin, Unknown with Amita Amitabha, 2-A with the Moon Cell | 2-A

Attack Potency: Small City level (Throughout multiple Holy Grail Wars, Saver killed dozens of Servants without fighting seriously, and he has A-rank strength, in the same range as Heracles), higher with Chakravartin (Is far stronger than his regular attacks, and can easily kill Servants), Unknown with Amita Amitabha (An EX-rank Anti-Unit Noble Phantasm that deals damage that "no living thing can withstand", freeing all things from suffering and reincarnating them into Buddha. Humanity as a whole has no way to survive it), Multiverse level+ with the Moon Cell (Chakravartin was able to seize control of the operation of parallel worlds from the Moon Cell, and would have been able to end all possibilities) | Multiverse level+ (Stated to be a God at universal scale and comparable to Kiara)

Speed: Massively Hypersonic (Can easily keep up with Nero, Archer, and Tamamo) | Massively FTL+ (As a Bodhisattva, he should at least be comparable to Kiara)

Durability: Small City level (Has A-rank endurance, making him equal to Heracles and Artoria at her peak. Can take blows from Nero, Archer, and Tamamo), Enlightenment of the Sacred Fig makes him incredibly difficult to harm. | Multiverse level+

Range: Standard melee range, Kilometers with Chakravartin (Chakravartin is seven kilometers long and fires at all opponents in its range), Planetary with Amita Amitabha and Authority | Interstellar (Bodhisattvas can manipulate entire solar systems, governing over them as gods)

Intelligence: As the "messiah" who led the path of enlightenment and Buddhahood, Saver is knowledgeable in all things spiritual and has existed for thousands of years and it is implied that he'll survive to the end of time. He is calm and level-headed and is never prone to indecision or self-doubt, calmly following his Master's orders out of pity for his soul. Despite advocating non-violence, he is a master of unarmed combat as evidenced by his EX-Rank in Kalaripayattu, the basis for nearly every rational martial art in existence. As a result, he was able to fight and kill dozens of Servants throughout multiple Holy Grail Wars.

Weaknesses: In his Servant form, Saver cannot utilize Authority without harming and straining himself. Transmigration into One weakens should the target be more than human (i.e. of divine blood), and Transmigration into One cannot completely "save" those of a scale of existence above mankind, such as gods. There is also a small chance to be able to overcome it by those who have reached enlightenment through their strong ideals, or those who have not known the suffering of life or its four noble truths.

Authority: As a God, Saver possesses Authorities, special powers distinct from Codecasts, Noble Phantasms, and Skills in that while they achieve results based on some logical process or principle, an Authority realizes a result simply because the user has the right to do so. Authorities are powers on the level of world construction and can be powers such as event shifting, time manipulation, causality manipulation, manipulation of concepts they embody, kingdom-building and other powers on that level. The Gods originally used their Authorities during the Age of Gods to shape the world, build kingdoms and advance civilization. But as time went, humanity advanced to the point that Authorities became unnecessary. When summoned as a Servant, Saver cannot utilize his Authorities without heavily straining and harming himself.

Chakravartin: Turner of the Wheel: Saver's first Noble Phantasm, two chakram that expand in the sky above him. The smaller one is seven-kilometer long while the larger one is seventy kilometers long. The smaller chakram slowly rotates during battle, firing bolts of light at nearby enemies like a mobile, omnidirectional artillery platform. Over time, the number of rings increase, and the lights on the mandala behind Saver light up, until there are seven rings and seven lights. Once these seven prismatic rings and lights are all activated, it allows for the use of Saver's true Noble Phantasm, Amita Amitabha. In addition to its bolts of light Chakravartin also displayed the ability to seize control of the Moon Cell, allowing Saver to change the rules of the Moon Cell holy grail war and potentially prune all the timelines in the timeline tree.

Amita Amitabha: Transmigration into One: The ultimate Anti-Unit Noble Phantasm, and Saver's true Noble Phantasm. After Chakravartin is fully charged, Saver can utilize Amita Amitabha by reciting its true name. The mandala's lights then converge onto the chakram, and all the rings of light combine into a single, massive spinning ring, forming the halo seen on the back of the celestial Buddha, Vairocana. The pillars of light surround his opponent and engulf them, creating a massive explosion, a teaching to showcase the final Moksha, calling upon energies rivaling the laws of man's creation. According to the Indian idea of Brahman, all humans are reincarnations of Brahma, and all humanity is thus one individual. Amita Amitabha "saves" those that it strikes, freeing them from suffering and returning all things to the Buddha.

As human history grows longer and longer, the attack grows more powerful, and it deals damage that no living thing can withstand, furthermore it freezes the target upon activation preventing them from defending themselves or evading the Noble Phantasm. Though those that are not alive and have not known the suffering of life or the four noble truths have a small chance of survival. Those who have achieved enlightenment through their own strong ideals can overcome it, and it is weaker against those that are not completely human, and it cannot completely "save" those who are on a scale of existence above mankind.

Charisma: The natural talent to command an army. Increases the ability of allies during group battles. Saver's deification and nature as a widely-worshiped entity are reflected in his A+ rank, at which point it is not just a skill but more of a curse, strongly affecting humans and increasing the morale of those who follow Saver by a significant amount. This skill can be used as a subtle form of mind manipulation, allowing Saver to simply ask for things from their opponent, upon which his charisma will compel them to do so unless one is particularly strong-willed and/or rebellious.

Counter Hero: The Class Skill of the Saver class, which reduces the parameters of all heroes that they face in combat. Saver's B-rank in this skill reduces all of an opponent's parameters by two ranks, effectively cutting their statistics down by 40%. It is less effective against anti-heroes, reducing it only by one rank, or 20%.

Enlightenment of the Sacred Fig: A skill that renders protection to the one who has reached the Truth of the World and has become a Protector of the World. It unconditionally reduces the damage dealt by physical, conceptual, and interdimensional attacks by a value equivalent to Saver's total health. It also shuts out all possibility of mental interference. For Buddha, even the seven desires of man can be met with perfect tranquility.

Kalaripayattu: An ancient Indian martial art, the ancestor of all martial arts founded based on rational thought. It does not rely on power or talent and is defensively oriented. Saver's EX rank showcases his mastery over the art, being capable of casually fighting and defeating Servants while unarmed and remaining in a meditative stance.

Samadhi Samadhi: Refers to the state of perfect meditative union. Enhances Saver's attributes and allows Saver to drain magical energy from his attacker while defending.

Dukkha Samudaya: The accumulation of the noble truth of suffering. A counterattack that deals high damage.

Madhyamā-pratipad: The middle way, a moderation in favor of indulgence or mortification. An attribute enhancement which causes Saver's attacks to heal him in the process.

Dukkha Dukkha: The noble truth that life is full of suffering. An attribute enhancement which causes Saver's heavier attacks to stun their target.

Śūnyatā: Emptiness, the concept that all things are without absolute identity or permanence. The damage dealt varies based on how high the targets magical energy is in comparison to Saver's.

Retrieved from "https://vsbattles.fandom.com/wiki/Saver?oldid=6973483"
Community content is available under CC-BY-SA unless otherwise noted.