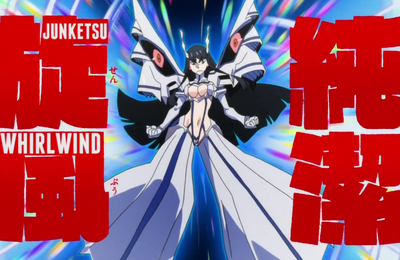 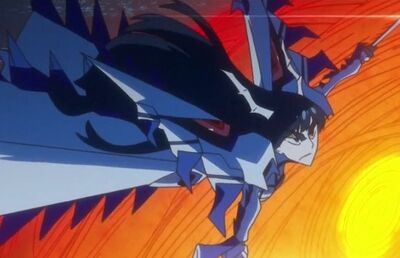 Satsuki Kiryūin is a former main antagonist and later primary protagonist in Kill la Kill. She's the former president of Honnōji Academy's Student Council. Despite being only a high schooler, she is one of the most powerful and feared people in the entire country. Satsuki rules over the academy and its students with absolute dictatorial authority. It is later revealed that her actions aren't as ill intent as may seem, as her true goal is protect humanity from her evil mother, Ragyō Kiryūin, who plans on destroying the planet.

Powers and Abilities: Superhuman Physical Characteristics, Martial Arts (Expert Hand-to-Hand Combatant), Weapon Mastery (Expert Swordswoman), Enhanced Senses (Able to sense people's presences without even knowing that they are there), Acrobatics, Surface Scaling, Willpower Manipulation (Can create shockwaves with her willpower alone, and was able to dominate Junketsu and force it to do what she wanted through sheer willpower), Cloth Manipulation, Afterimage Creation (Able to create solid afterimages fast enough to appear in dozens of places simultaneously), Air Manipulation (Can generate high-speed air slashes), Light Manipulation (Can emit light from her presence), Flight (Via Junketsu, Post-Senketsu only), Shapeshifting (Junketsu is able to change its form at will, Post-Senketsu only), Resistance to Mind Manipulation (Able to constantly resist Junketsu's influence, when even normal life fibers have mind and memory manipulation [As stated by Inumuta, anyone in Japan who hadnt been consumed by COVERS had their minds taken control of by the life fibers in their clothing and had parts of their memories eaten so that word of Life Fibers taking over Japan wouldnt spread]. Able to wear a Kamui, which is 100% Life Fibers, when a normal person wearing clothing made of only 50% Life Fibers gets overwhelmed to the point of becoming a berserk monster.)

Attack Potency: Mountain level (Far stronger than the Mk 2 Elite 4. Fought Post Mk 1 Absorption Ryuko to a standstill. Uzu Sanageyama admitted that Satsuki is so far above him in power that him wearing his Mk 2 Goku Uniform would just barely be able to beat her middle school self if she held back) | At least Mountain level (Much stronger than her previous form due to being better synchronized with Junketsu. Oneshot multiple COVERs with just her toenail blades while naked) | Country level (Comparable to Post-Junketsu Ryuko. Stronger than the Ultimate Regalia Elite 4 due to Junketsu being injected with a mixture of Satsuki's and Ryuko's blood and infused with Senketsu's life fibers and was able to hold off base Ragyō Kiryūin alongside them)

Stamina: Very high (Was able to dominate Junketsu, a kamui made 100% of life fibers, and make it bend to her will when any normal person would be turned into a mindless rampaging monster when wearing even 50% life fibers. Was able to endure a full month of torture and then immediately go on to fight with no signs of tiring.)

Intelligence: Gifted (Satsuki is highly skilled in combat, far surpassing any of the elite four to the point that Sanageyama, the most skilled fighter of the four, states that Satsuki is so far above him that he would only barely be able to beat her middle school self is he had his Mk 1 uniform and she held back. She is also a master strategist, often devising plans within plans within plans to disguise her true motives until the absolute last second as well as planning contingencies should her plans fail, such as preemptively setting explosives within Honnōji Academy Dome should her plan to kill Ragyo fail and preemptively replacing her toenails with Bakuzan's metal should she be captured if that plan failed.)

Weaknesses: If someone cuts the Banshi threads of Junketsu she becomes more vulnerable to attacks.

Pica (One Piece) Pica's profile (Both were 7-A, speed was equalized)