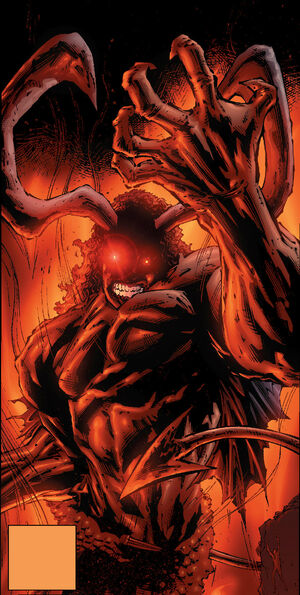 Along with his adversary, God and Satan are both children of the Mother of Existence, the creator of the universe and all its worlds. Mother gave each of its infinite children a world to run as they wish; God and Satan were both given Earth. Having a different point of view, the two constantly bickered and fought to the point where they declared war on one another. Mankind was subsequently created by God, but given free will by Satan. Due to this combination, Mother viewed humanity as unique and decided to act on their behalf, rather than let her children use them as cannon fodder. Regarding God and Satan as disappointments, she stripped both of her children of their kingdoms and made them sleep in a forgotten corner of the universe. Mother was willing to give them a second chance, however, when she brought back God and Satan as the human children of Terry and Wanda Fitzgerald, Jake and Katie Fitzgerald respectively, in order to give them an appreciation for humanity and change their ways. This plan failed, as the twins simply became more insane than before and began to wreak further chaos on Earth. God and Satan have since regained their memories, powers, and kingdoms, and are bolstering their armies for the final push towards Armageddon.

Intelligence: Incredibly High. Has ruled hell and warred with his brother for millions of years