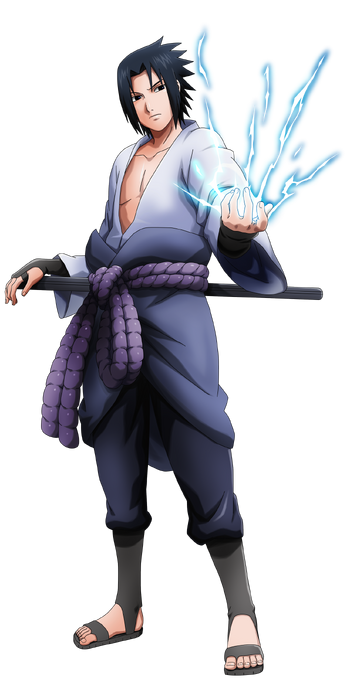 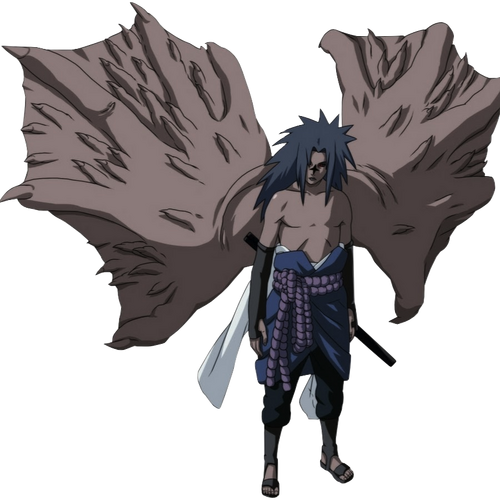 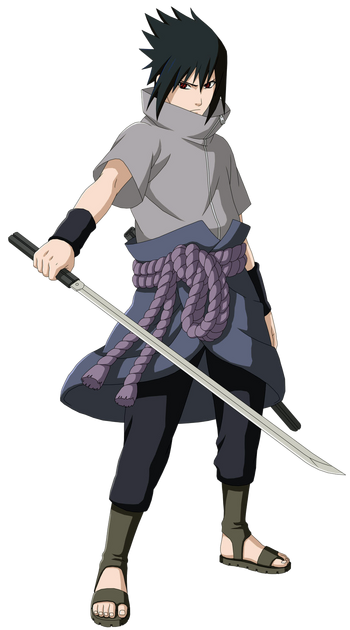 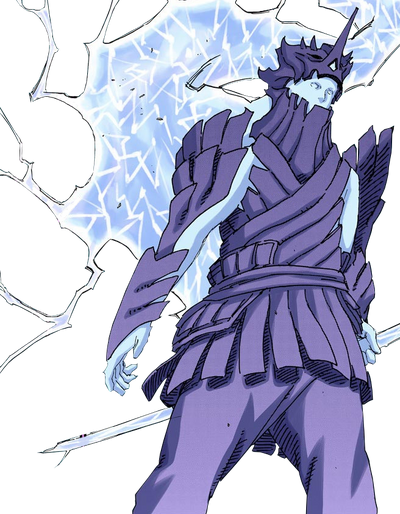 Sasuke Uchiha (うちはサスケ, Uchiha Sasuke) is one of the last surviving members of Konohagakure's Uchiha clan. Since his childhood, he made it his goal to exact revenge against his older brother, Itachi, who had slaughtered their entire clan. He was initially a member of Konoha's Team 7, however, Sasuke defected from the village to obtain power from Orochimaru and later affiliated with the Akatsuki, becoming an international criminal in the process. He later proved instrumental in ending the Fourth Shinobi World War before finally being redeemed by his rival and best friend, Naruto Uzumaki. After traveling as a nomadic vagabond to analyze the world, Sasuke returned to the village he once sought to destroy — and continued to protect it for years to come.

Superhuman Physical Characteristics, Chakra Manipulation, Aura, Surface Scaling, Water Walking, Stealth Mastery, Acrobatics, Duplication, Statistics Amplification (Can augment his physical capabilities with chakra), Master Swordsmanship, Master in Shurikenjutsu and Taijutsu, Speed Enhancement with Shunshin, Breath Attack, Fire Manipulation (Can create powerful black flames that burn anything and cannot be extinguished, with himself being the only one that can put them out), Electricity Manipulation, Explosion Manipulation with explosive tags, Shapeshifting (Can transform into or replace himself with animate and inanimate objects to avoid damage), Limited X-ray Vision (The Sharingan allows him to see chakra through solid obstacles), Enhanced Sight (The Sharingan greatly enhances his vision, also allowing him to effectively keep track of swift moving objects, see and give colour to chakra, and can even let him see on a cellular scale), Power Mimicry (The Sharingan allows the user to copy Jutsu used by others, including combat styles), Analytical Prediction (He can predict someone's movements based on the smallest muscle tension thanks to the Sharingan, allowing him to cleanly retaliate and counterattack without wasting any movements), Can see camouflaged targets with the Sharingan, Paralysis, Pain Manipulation, Fear Manipulation, Perception Manipulation, Illusion Creation, Mind Manipulation, Sleep Manipulation, and Memory Manipulation (Can trap people in Genjutsu without eye contact, and control others with the Sharingan), Information Analysis (with sharingan can read people's energy to determine their power and their next move), Summoning (Can summon Garuda, his hawk, and snakes), Limited Weather Manipulation (Via Kirin), Can create an ethereal warrior like creature that acts offensively and defensively, Non-Physical Interaction, Weapon Creation, Barrier Creation and Large Size with Susanoo (Size varies from Type 2 to Type 3, as the size of Susanoo was portrayed inconsistently), Resistance to Illusion Creation, Perception Manipulation, Mind Manipulation, and Poisons, Possession (Stopped Orochimaru from taking over his body), Electricity Manipulation (Was not affected by Darui's lightning style jutsu)

All previous abilities in base enhanced, Transformation, Empowerment, Statistics Amplification, Flight and Regeneration (Low-Mid up to High-Mid with the Body Replacement Technique), Immortality (Types 3 and 6), Snake Manipulation, Pocket Reality Destruction (He was eroding the dimension Orochimaru created with just his will)

All previous abilities in base significantly enhanced, Sealing, Chakra Absorption, Air Manipulation, Water Manipulation, Earth Manipulation, Healing with the Preta Path and Naraka Path, Paralysis with the black receivers (Can paralyse and hinder the movements of targets, as well as control them), Flight (Via the Deva Path and Perfect Susano'o), Telekinesis and Gravity Manipulation (The Deva Path allows him to manipulate attractive and repulsive forces, and he create a center of gravity with Chibaku Tensei), Teleportation (Can switch his location with that of other people or objects with his Rinnegan), Possible Body Control and Technology Manipulation (The Asura Path allows the user to create additional mechanical arms and weaponry such as blades, drills, missiles and cannons), Resurrection (Can revive the dead with the Outer Path), Mind Reading and Soul Manipulation (Can read the minds of targets and extract their souls after making contact with them with the Human Path), and Summoning (Can summon various animals, some of which can fly and bombard targets from above, manipulate water, continuously split into separate entities when attacked, and a demon that instantly kills targets who lie, and can keep and transfer souls with the Animal Path), Portal Creation and Dimensional Travel, Extrasensory Perception (Can see invisible beings that exist in a separate dimension), Cross Dimensional Interaction (Capable of interacting with Madara Uchiha's limbo clones), Cosmic Awareness (could sense Naruto in another dimension), Resistance to Matter Manipulation (Users of Six Paths chakra are resistant to the molecular destruction effects of the Truth Seeking Balls), Paralysis Inducement (Can touch the black receivers without being affected.), Ice Manipulation (Possesses better chakra control than Kakashi), Deconstruction, Limited Resistance to Power Nullification (Users of Six Paths chakra can bypass the nullification effects of the Truth Seeking Balls and the attacks of Six Paths chakra users can bypass the nullification effects of the Truth Seeking Balls)

Attack Potency: At least Town level (Portrayed above the members of Team 7) | Mountain level+ in CS2 (Should be stronger than his previous Cursed Seal transformation before the timeskip) and with Kirin (Destroyed the Uchiha Fortress and the mountain below) | Mountain level+ (Should be comparable to Itachi) | Multi-Continent level (Destroyed Obito Uchiha's Truth-Seeking Ball alongside Naruto) | Moon level+ (Comparable to Naruto, and created a moon alongside him), far higher with Six Paths Susanoo

Standard Equipment: His katana (a Chokuto) and various ninja tools

Intelligence: Has shown some cunning in battle, knowledgeable in various ninja arts, and can copy and learn new fighting styles during a battle

Weaknesses: Sasuke is somewhat overconfident and easy to manipulate emotionally

- Sharingan (Mirror Wheel Eye): The first of the Sharingan's powers is being able to see the flow of chakra. The Sharingan itself gives color to chakra, allowing the wielder to differentiate them. The Sharingan's second-most prominent ability grants the user an incredible clarity of perception, allowing the user to pick up on subtle details. As the Sharingan evolves, this ability extends to being able to track fast-moving objects before finally giving some amount of predictive capabilities to the user, allowing them to see the image of an attacker’s next move from the slightest muscle tension in their body. The Sharingan's third and most well-known ability is that it grants the user the ability to memorize almost any technique that he or she witnesses. The Sharingan's final commonly-used ability is capable of inducing a unique brand of hypnosis that involves suggesting actions and thoughts to the opponent through genjutsu cast by simple eye contact between both parties.

-Mangekyō Sharingan (Kaleidoscope Copy Wheel Eye): An advanced form of the Sharingan that is acquired through the trauma experienced from the death of the person closest to the Sharingan user. Over time, the use of the Mangekyō Sharingan's techniques deteriorates the user's eyesight to the point of blindness. Only by taking and transplanting the Mangekyō of another Uchiha clan member can the vision be restored, a process that results in the creation of an Eternal Mangekyō Sharingan. Not only does this process permanently restore one's eyesight, but it also gives the person even greater power.

- Mangekyou Sharingan: Amaterasu: Sasuke summons black fire that moves with his gaze. The flames are shown to be very resilient as they have survived complete immersion in water. It is powerful enough to smother any normal flames and is said to burn for seven days and nights.

- Mangekyō Sharingan: Susanoo: The third ability granted by the Mangekyō Sharingan after awakening the abilities in both eyes. It creates a gigantic, humanoid being that surrounds the user. Susanoo is formed through the materialization of the user's chakra and as such differs in appearance as well as color between users. 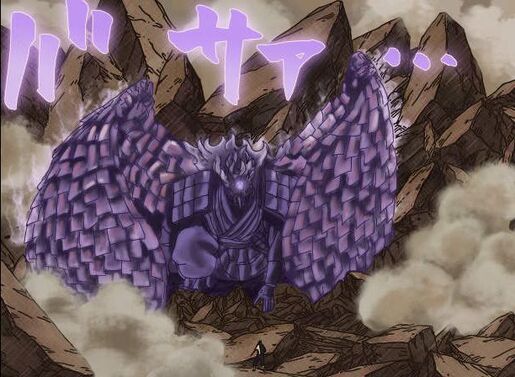 - Katon (Fire Release): One of the basic elemental nature transformations. It is performed by molding superheated chakra inside the stomach before releasing it via the lungs and mouth. There are also variants to this in the form of some mediums such as the use of gun powder, explosive tags, and chakra flow into a weapon.

- Raiton (Lightning Release): One of the basic elemental nature transformation techniques that allow the user to generate lightning by increasing the high-frequency vibrations of their chakra, allowing for piercing damage and fast movement. The electricity paralyzes the target so that they are unable to move and leave them vulnerable to a finishing strike. While uncommon, lightning can be infused into bladed weapons in a way similar to Wind Release through chakra flow for increased the piercing power through vibrations, with the added effect of inducing numbness

- Shunshin no Jutsu (Body Flicker Technique): A high-speed movement technique, accomplished by using chakra to temporarily vitalize the body and move in a short burst of enhanced speed.

- Kuchiyose no Jutsu (Summoning Technique): The Summoning Technique is a space-time ninjutsu that allows the summoner to summon animals or people across long distances instantly. Sasuke formerly used this technique to summon snakes (including Manda). He currently uses it to summon hawks.

- Rinnegan: After receiving half of the Sage's power, Sasuke awakened the Rinnegan in his left eye. Unlike previous Rinnegan users, by only having the Rinnegan in one eye and the Mangekyō Sharingan in the other, Sasuke can use both powers simultaneously. Unique to his Rinnegan, he possesses nine tomoe identical to the Shinju and Kaguya's eye. With it, Sasuke gains the ability to touch Madara Uchiha's Chakra Disruption Blades without suffering after effects. He is also able to see otherwise invisible targets and has gained the ability to teleport himself and anyone near him within a limited range. Sasuke is also able to use his Chidori Sharp Spear to bisect Madara Uchiha's jinchūriki form with ease.

-Preta Path: Blocking Technique Absorption Seal: A highly advanced sealing technique that is capable of absorbing any chakra, regardless of any shape or nature transformation, and dispersing it within one's body by spinning the chakra within one's body in the opposite direction. Should the user get close enough to grab the opponent, the barrier can absorb chakra right out of an individual's body, effectively draining them. 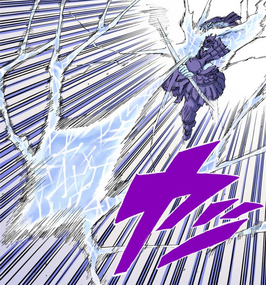 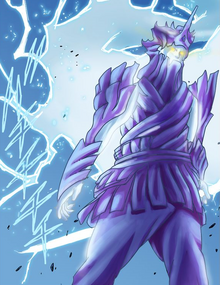 - Amenotejikara: A ninjutsu using the Rinnegan received from the Sage of Six Paths. Within a certain range, the jutsu user can switch himself with the location of a target object in an instant. If the user switches himself with other objects in close-range combat, the user can evade enemy attacks in an instant, and can also attack by switching himself with a kunai or other weapon.

Note: Due to Sasuke having Itachi's eyes he should be able to replicate all of his brother's Sharingan abilities. However Sasuke has not shown any of these in combat, so it must be noted in versus matches that he is allowed to use these powers. Otherwise, they are unusable.

Note 2: The exact strength of Amaterasu is unknown as it has been portrayed inconsistently, but it can technically harm much stronger characters. As such, claims that it can overtax the durability of comparable characters in versus threads could be considered valid.