VS Battles Wiki
Register
Don't have an account?
Sign In
Advertisement
in: Naruto, Characters, Male Characters,
and 72 more 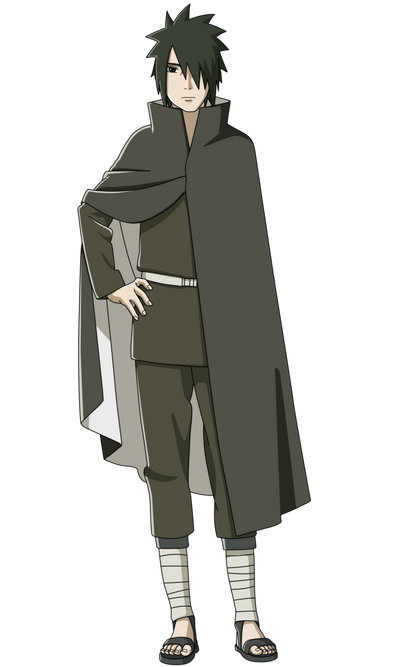 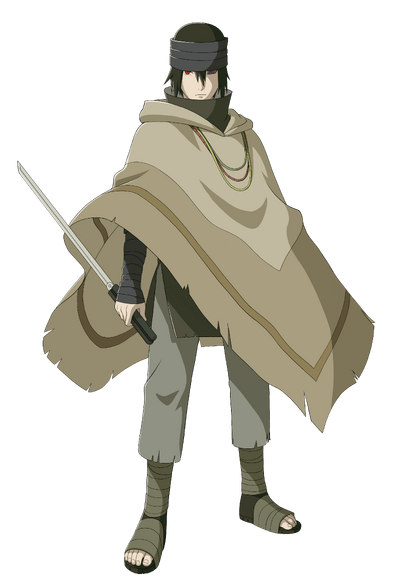 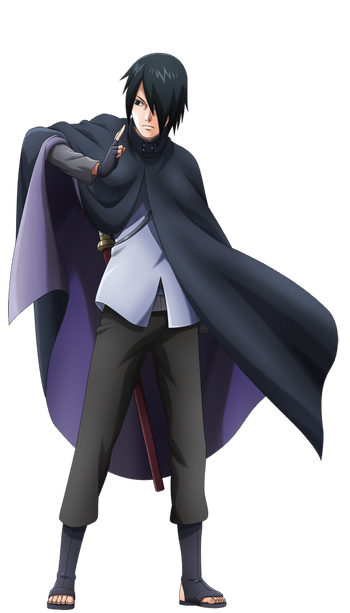 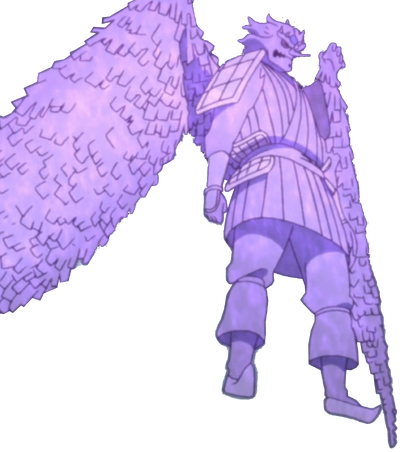 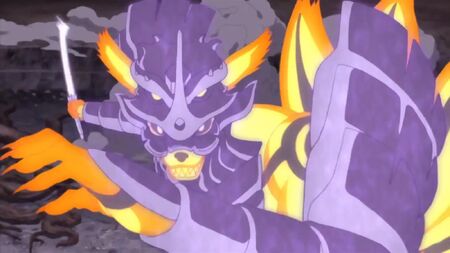 Sasuke Uchiha is one of the last surviving members of Konohagakure's Uchiha clan. After his older brother, Itachi Uchiha|Itachi, slaughtered their clan, Sasuke made it his mission in life to avenge them by killing Itachi.

After learning the truth of his brother's sacrifice and later proving instrumental in ending the Fourth Shinobi World War and being happily redeemed by Naruto, Sasuke decides to return to Konoha and dedicates his life to help protect the village and its inhabitants. He is referred to as the "Supporting Kage" and the only one who can rival the Hokage.

Superhuman Physical Characteristics, Chakra Manipulation, Aura, Surface Scaling, Water Walking, Stealth Mastery, Acrobatics, Breath Attack, Master in Shurikenjutsu, Swordsmanship and Taijutsu, Duplication, Explosion Manipulation with explosive tags, Statistics Amplification (Can augment his physical capabilities with chakra), Shapeshifting (Can transform into or replace himself with animate and inanimate objects to avoid damage), Limited X-ray Vision, Enhanced Sight, Power Mimicry, Analytical Prediction, Can see camouflaged targets with the Sharingan, Speed Enhancement with Shunshin, Paralysis, Sleep Manipulation, Pain Manipulation, Fear Manipulation, Perception Manipulation, Illusion Creation, and Mind Manipulation with Sharingan Genjutsu (Can trap people in Genjutsu without eye contact, and control others with the Sharingan), Fear-Inducing Aura, Information Analysis (with sharingan can read people's energy to determine their power and their next move), Elemental Manipulation (Air Manipulation, Electricity Manipulation, Fire Manipulation, Water Manipulation, Ice Manipulation, Earth Manipulation), Limited Weather Manipulation (Via Kirin), Summoning (Can summon Garuda, his hawk, and snakes. Can also summon various animals, some of which can fly and bombard targets from above, manipulate water, continuously split into separate entities when attacked, and a demon that instantly kills targets who lie, and can keep and transfer souls with the Animal Path), Sealing, Portal Creation, Dimensional Travel, Chakra Absorption, Healing with the Preta Path and Naraka Path, Paralysis with the black receivers (Can paralyse and hinder the movements of targets, as well as control them), Memory Manipulation (Can look through the memories of his targets to gain information and also erase them), Flight (Via the Deva Path and Perfect Susano'o), Telekinesis and Gravity Manipulation (The Deva Path allows him to manipulate attractive and repulsive forces, and he create a centre of gravity with Chibaku Tensei), Teleportation via Amenotejikara, Body Control and Technology Manipulation (The Asura Path allows the user to create additional mechanical arms and weaponry such as blades, drills, missiles and cannons), Resurrection (Can revive the dead with the Outer Path), Mind Reading and Soul Manipulation (Can read the minds of targets and extract their souls after making contact with them with the Human Path), Extrasensory Perception with the Rinnegan (The Rinnegan is capable of perceiving invisible barriers, and can even see the Invisible Limbo Clones, which reside in a different dimension and are normally impossible to perceive), Cross Dimensional Interaction (Capable of interacting with Madara Uchiha's limbo clones), Atomic Manipulation and Creation (Can create objects by manipulation atoms with chakra), Limited Durability Negation, Enhanced Fire Manipulation, and Non-Physical Interaction with Amaterasu and Enton (The user spawns inextinguishable black flames on their target as long as it's in their line of sight. The flames give off incredible heat, are capable of harming opponents far above the user's level of power, and have been repeatedly referred to as the most powerful offensive technique possessed by the Mangekyo Sharingan. The flames will continue to burn until their target is turned to ash, even when completely submerged in water, or if their target happens to be other flames. Additionally, he can manipulate Amaterasu's shape for offensive and defensive purposes with Enton), Soul Manipulation and Non-Physical Interaction (Users of Susano'o can interact with the soul. Scales to Itachi's Susano'o that can wield Totsuka Blade, which doesn't have a physical form), Weapon Creation (His Susano'o can create chakra blades, arrows, Magatama beads, and shields), Barrier Creation (His Susano'o forms as a barrier around him to protect him from attacks), and Large Size (Size varies from Type 2 to Type 3, as the size of Susano'o was portrayed inconsistently) with Susano'o , Cosmic Awareness (could sense Naruto in another dimension), Enhanced Senses Manipulation (Blocked the vision of Isshiki's Byakugan) via Special Smoke Bombs, Immense Pain Tolerance (He was unaffected by one of his wings getting blown off, and was able to continue fighting despite the Susano'o causing "every cell in his body to hurt". He can also withstand getting repeatedly stabbed by Chakra Receivers and having his eye stabbed)

Range: Extended melee range. Several dozens of meters to thousands of kilometers with ranged attacks. Interdimensional with Amenotejikara (Created a portal to Momoshiki's planet. Was also able to sense Naruto's chakra from a separate dimension)

Intelligence: Above average normally, Genius in combat (Has shown some cunning in battle. Knowledgeable in various ninja arts. Can copy and learn new fighting styles during a battle. Can be brighter than Naruto in terms of combat)

Weaknesses: Lacks his left arm. Traveling between dimensions consumes a great portion of his Chakra reserves.

Shadow Clone Technique: The user creates tangible “shadow clones” that can fight and use his techniques but disappear after one strong hit and relay their memories and experiences to him.

Sharingan (Mirror Wheel Eye): The first of the Sharingan's powers is being able to see the flow of chakra even through solid obstacles, greatly enhances his vision, also allowing him to effectively keep track of swift-moving objects, see and give color to chakra, and can even let him see on a cellular scale.The Sharingan allows the user to copy Jutsu used by others, including combat styles. He can predict someone's movements based on the minor muscle tension thanks to the Sharingan, allowing him to retaliate and counterattack efficiently.

Katon (Fire Release): One of the fundamental elemental nature transformations. It is performed by molding superheated chakra inside the stomach before releasing it via the lungs and mouth. There are also variants to this in some mediums, such as gun powder, explosive tags, and chakra flow into a weapon.

Raiton (Lightning Release): One of the basic elemental nature transformation techniques that allow the user to generate lightning by increasing the high-frequency vibrations of their chakra, allowing for piercing damage and fast movement. The electricity also can paralyze the target. While uncommon, lightning can be infused into bladed weapons in a way similar to Wind Release through chakra flow for increased piercing power through vibrations, with the added effect of inducing numbness

Rinnegan: Said to be the most powerful and majestic of the Three Great Dōjutsu. It was admired as being able to bring forth all ninjutsu. The holder of these eyes can completely master all five fundamental nature of ninjutsu. It also allows the user to use all of the Six Paths Techniques and the seventh Path, "beyond life and death."

Amenotejikara: Sasuke's unique Rinnegan power. Sasuke can swap positions with the object he sees or teleport directly into blank space with a shorter distance. Suppose the user switches himself with other things in close-range combat. In that case, the user can evade and counter an enemy's attack simultaneously by replacing himself with a kunai or other weapon. Sasuke later upgraded this power, allowing him to travel between dimensions and even opening a portal to transport others to said dimensions.