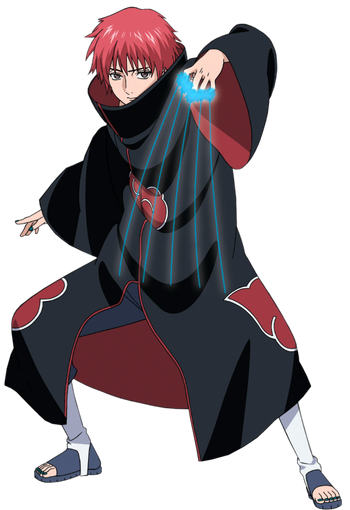 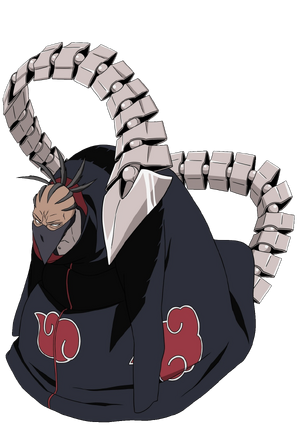 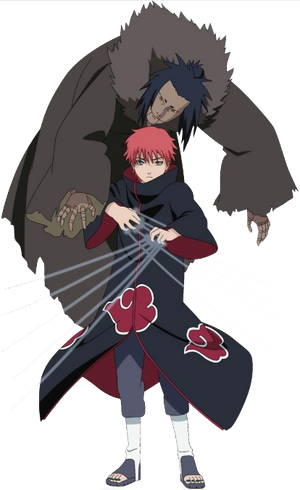 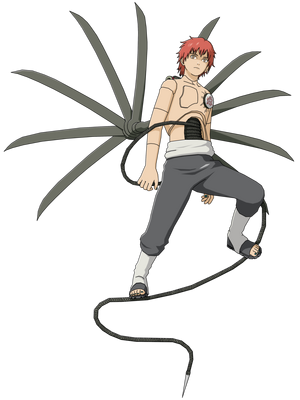 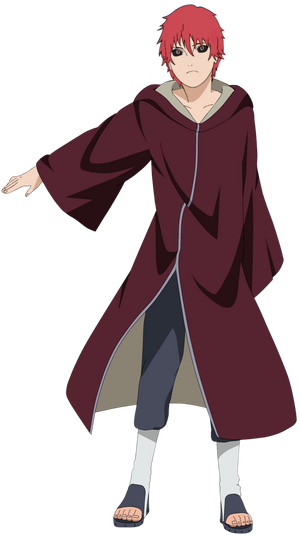 Sasori (サソリ, Sasori), renowned as Sasori of the Red Sand (赤砂のサソリ, Akasuna no Sasori), was an S-rank missing-nin from Sunagakure's Puppet Brigade and a member of Akatsuki, where he was partnered with Orochimaru and later, Deidara.

Tier: At least Low 7-C with Hiruko Puppet. At least 7-C with Iron Sand Techniques and his main body

Attack Potency: At least Small Town level+ with Hiruko Puppet (Stomped Kankuro and destroyed his puppets with Hiruko. His performance of a hundred puppets destroyed some of Chiyo's Chikamatsu Collection who should be superior to Kankuro's puppets). At least Town level with Iron Sand Techniques and his main body (Each of the Third Kazekage's Iron Sand Techniques would have killed Sakura and Chiyo with a direct hit. Chiyo considered fighting the Third Kazekage to be a hopeless situation and wanted to fight it alone with the Chikamatsu Collection).

Speed: Massively Hypersonic+ (Reacted to and dodged many attacks from Sakura and Chiyo)

Lifting Strength: At least Class G with his main body

Durability: At least Small Town level+ with Hiruko Puppet. At least Town level with his main body (Survived hits from Sakura with seemingly no damage)

Stamina: Very high. Nigh Unlimited as an Edo

Intelligence: Gifted (He is a master of puppetry, capable of flawlessly manipulating puppets with grace and extreme precision at high speeds. He is also an expert in infiltration and managed to hide his true appearance from others except for a select few. A great manipulator, as he managed to turn several loyal Suna shinobi into his spies, and his knowledge of poisons makes him an expert at silent kills)

Weaknesses: If his core of living flesh is destroyed, he dies. When using his main body, the core is exposed. He isn't very skilled in close combat.