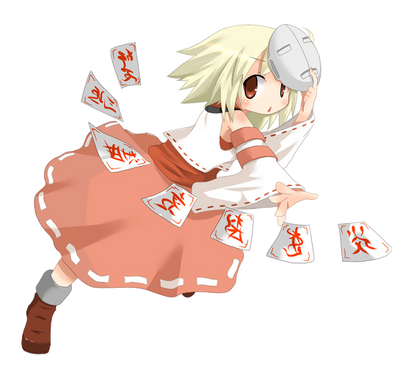 Sasari is a playable character in Wonderful World. A runaway girl who came across the sea dreaming of a happy life. She was a shrine maiden of the Harunaka Shrine. Her voice tone changes frequently, and always take a stupid attitude. Because she was longing for the other side of the sea, she changed the color of her eyes & her hair. Sasari initially had Black eyes & brownish black hair. The side of trademark is her own work, it seems that it was a dream to go on a journey to wear this and punish evil. Perhaps there is a longing for parents who are out on a devastating journey. After going out of the house, she earns prize money and makes mistakes and gets living expenses by street performing and is going through various places. Her goal is to search for her parents who are on a journey of exorcism for the time being, but she thinks only if it finds it to an interesting extent. Techniques used by her can treat magical powers in a completely different way from the magic of the Central Continent, and can cause a variety of phenomena using tools.

Name: Sasari Haruha (Kanji Variant is stated to be the same.)

Powers and Abilities: Superhuman Physical Characteristics, Doll Manipulation, Elemental Manipulation, Counterattack (When Scapegoat is used, if the opponent hits Sasari as it immediately starts, it showers multiple Female Gender Signs.), Ki/Chi Manipulation, Exorcising dark arts, The ability to summon a Shikigami at will (Janet's spirit has been brought down from Generation to Generation, but was remodeled in a western sense as a result. Still should be considered thus. A Shikigami is stated to be a Kami represented as a Small Ghost.)

Intelligence: Above Average when traveling, higher when acting as a Vigilante.

Weaknesses: Is drunk, & Intoxicated sometimes, Before Friede, she claims to be the best of her breed. She can be somewhat naïve (Though as a Vigilante, this doesn't seem to be the case.).

Feats: Sasari is capable of feats more powerful than Magic (Ki/Chi Manipulation), Has total control over her Shikigami, Janet. Has even survived being drunk where some die from intoxication.

Note: Like Ryuza with his Hiragana based Furigana subnames, Sasari has the exact same thing for her as well. Further translation is neeeded in this case...

Retrieved from "https://vsbattles.fandom.com/wiki/Sasari_(Wonderful_World)?oldid=4617361"
Community content is available under CC-BY-SA unless otherwise noted.