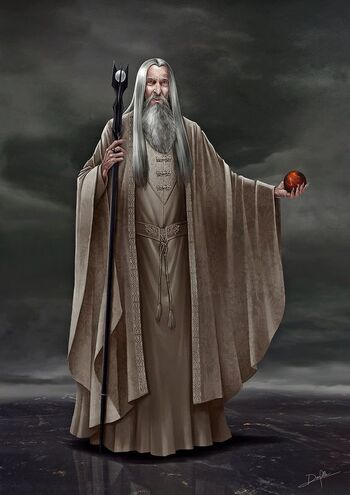 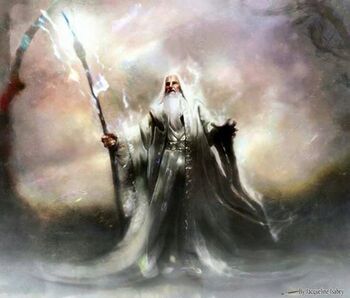 Saruman is the fallen White Wizard and one of the Istari, five Maiar who came to Arda in human form to help in the conflict against Sauron. Eventually, Saruman allied himself with Sauron, hoping to betray him once he had learned his weakness so he could establish himself as ruler of Middle Earth. Saruman's power was destroyed before his plans could come to fruition, and he was killed when Grima Wormtongue snuck up behind him and slit his throat, after enough abuse from him.

Powers and Abilities: Can bend the will of others with no more than his voice | Superhuman Physical Characteristics, Skilled swordsman, Light Creation, Telekinesis, Forcefield Creation, Immortality (Type 1), Telepathy, Mind Reading/Entrance into dreams, Communication with animals, Weather and Lightning Manipulation, Fire, Smoke and Heat Manipulation, Energy Manipulation and projection via Words of Command | Superhuman Physical Characteristics, Flight, Regeneration (Low-Godly), Immortality (Types 1, 3 and 4), Shapeshifting, Size Alteration, Elemental Manipulation, Empathic Manipulation (The lords of the Ainur can create joy), Transmutation, Precognition, Invulnerability (The Ainur are immune from harm via conventional weaponry, as seen when, upon unlocking more of his divine power, Gandalf became invulnerable), Resistance to Death Manipulation (In Lord of the Rings the land of the dead is a real tangible place, Mandos, and can be affected and exited. Ainur don't go there upon death, rather becoming spirits until the regenerate. The only way to keep them there is if they are physically brought there and held by physical might), Intangibility and Non-Corporeality (At the very least in spirit form) | Intangibility and Non-Corporeality, Reality Warping, Conceptual Manipulation

Intelligence: Genius (A master of a vast multitude of spells. An incredibly manipulative person)

Weaknesses: Saruman is rather arrogant, and became powerless once completely removed from his position and his staff was broken

Notable Attacks/Techniques: As a Maia, Saruman has many potent elemental abilities. He is also a powerful sorcerer.

Magic: ​Being a powerful sorcerer, Saruman has access to many spells and the Words of Command, powerful spells that are much more dangerous than normal magic. His magical power is far superior to Gandalf the Grey (Though inferior to the White), who, at his peak, knew every spell invented by Orcs, Dwarves and Elves, with the exclusion of men being presumably do to their inability to use magic.

Powers of the Ainur: As a Maia, Saruman has access to wide variety of potent and devastating supernatural abilities, for the Ainur were created as elemental spirits, and each have divine authority and absolute control over a certain aspect of nature. Each and everyone of the Ainur is also able to manipulate magical energies and reality to serve their needs, and take any form they wish, even intangible and non-corporeal spiritual forms.