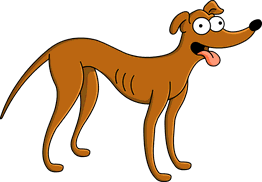 Santa’s Little Helper is the kind hearted dog belonging to The Simpsons. Originally a racer dog, his owner chased him away after losing another dog race. He immediately ran towards Homer and Bart, and they took him home, making him their family pet.

Powers and Abilities: Superhuman Physical Characteristics, Toon Force, Non-Physical Interaction (Could eat Homer's thought bubble), Was a very well trained police dog, Trained as a guard dog, Extrasensory Perception and limited Mind Manipulation (Can see and eat people’s thoughts), Enhanced Senses (Sight and smell. Could find Bart in the school when it was on fire. Shown to have much better senses than the Simpsons. In his police training he showed high levels of senses, found a key inside a statue hidden under some clothes in a briefcase that lead to a locker filled with cocaine), Stealth Mastery (He has shown that he can sneak around and outside the house without the Simpsons noticing), Social Influencing (His clueless but caring demeanor appeals to most people. Santa’s Little Helper convinced Homer to pay for a 750 dollar operation despite them not having the money for it with a sad glare and whimper, just by licking Super Intendant Chalmers, he immediately forgave Skinner for all the trouble caused at the school).

Durability: Building level+ (Has taken hits from several of the cast including Homer. Survived gallons of oil crashing into him and Bart, though his back legs broke)

Stamina: Extremely High (Has run across the city with no sign of fatigue; Has played for an entire day straight and didn’t show to be tired; Has notably higher stamina than Homer or Bart; Had a bullet cut and graze his shoulder and was fine. Dogs generally have much better stamina than humans)

Intelligence: Animalistic at his worst, and Below Average at his best (Santa’s Little helper is portrayed to be a very clueless dog early on. However, later in the series, He has shown some signs of intelligence, able to mimic human words, spell out "We Love You", and understood English later on in the show. He passed obedience school, is an extremely good police dog, saved Bart on multiple occasions, caught and incapacitate Snake, and has displayed human-like intelligence at times.)

Weaknesses: Typically shown to be clueless, although this likely doesn’t apply to dangerous or combat situations as his intelligence grows at those times; Doesn’t know when to stop eating.