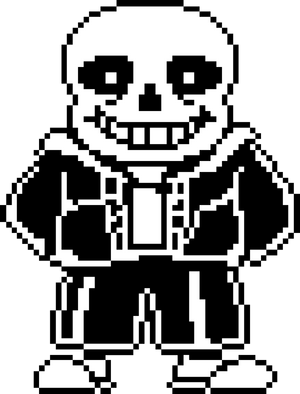 Sans is one of the guards of Snowdin Village. Lazy and frivolous with a knack for making puns and jokes, he has no interest in capturing humans, much to the chagrin of his brother, Papyrus. Despite his exceedingly laid-back attitude and status as "the easiest enemy", Sans has proven himself to be extremely observant and dangerous when pushed too far, becoming the final challenge Frisk faces on the Genocide Route and arguably the toughest opponent in the game.

Tier: 9-B Physically, 9-A with Magic and Projectiles

Name: Sans the Skeleton (never capitalized when spoken by himself)

Age: Unknown, (though Word of God confirms he is likely older than his brother)

Powers and Abilities: Superhuman Physical Characteristics, Magic, Inorganic Physiology (Every monster in the game is stated to be made of magic), Non-Physical Interaction (Magic is shown to be capable of harming ghosts, as shown in the Mad Dummy fight where magic attacks are the only way to harm him as opposed to physical attacks), Genius Intelligence, Energy Projection, Soul Manipulation, KARMA, Bone Manipulation, Intangible Attacks, Teleportation (Of himself, others, and his attacks), Telekinesis, Gravity Manipulation, Able to lock his opponent in place so neither of them will be able to do anything (Sans essentially, in gameplay terms, never takes his turn, forcing his opponent to be locked in an unwinnable combat situation. This likely only works under the rules of Sans' universe, which he exploited to do this), Glyph Creation, Clairvoyance (Is capable of sensing Frisk's LOVE and EXP in the end of the Pacifist route), Danmaku, Resistance to Soul Manipulation (Like all monsters, he can defend against and take hits to his SOUL as if they were normal attacks) and Heat Manipulation (Can survive in the Hotlands which can reach temperatures high enough to vaporize a styrofoam cup and water instantly)

Attack Potency: Wall level Physically (Is the weakest Monster in the underground, even below Monster Kid in terms of raw strength, scales to his durability, his ATK and DEF are equal to each other), Small Building level with Magic and Projectiles (With Magic and Projectiles, he is capable of harming and killing Frisk), Can ignore Durability to an extent via SOUL Magic

Speed: Supersonic attack speed (Able to consistently tag Chara/Frisk), at least Supersonic+ reaction speed (Capable of consistently dodging Chara/Frisk to such a degree that they could never land a hit on Sans, even if they reset and knew exactly what he would do and where he would be, even if he was asleep. Only hit after his opponent broke the rules of the game to do so. Should be one of, if not the, fastest non-god tier characters in the game)

Durability: Wall level (Is the weakest monster in the underground physically, Less durable than several monsters Frisk is able to one shot from the start of the game, is weaker than Monster Kid, who was threatened by a really long fall)

Stamina: Average, as he was able to repeatedly dodge blows from Chara/Frisk, though after a while, he showed obvious signs of tiring, such as sweating, heavier breathing, and eventually beginning to fall asleep. Despite this, he was still able to dodge after seeming to tire out

Range: At least dozens of meters via bone attacks, significantly higher via Gaster Blasters and teleportation to an unknown extent

Intelligence: Extraordinary Genius. While Sans is lazy, he's shown to be a genius, both in a tactical and scientific sense, if his workshop is any indication. He was shown to somehow run reports analyzing alternate timelines, as well as built what was likely some sort of time machine.

Weaknesses: Incredibly lazy, won't fight unless necessary (only fought in the genocide route, where he believes you to be a threat to all other timelines). If Monsters are not determined to kill their foe, and is facing against a foe with a strong soul and has murderous intent, their defenses will weaken. 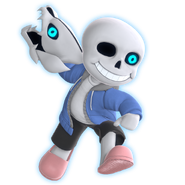 "it's a beautiful day outside. birds are singing, flowers are blooming..."

Sans' initial attack, activated before the player even has a chance to open their menu.

Sans demonstrates a far greater control over his soul powers than his brother, though using them constantly tires him out.

*Reading this doesn't seem like the best use of time.

Sans goes all out with Blue Mode for one last time.

Sans' tarot card art
Add a photo to this gallery

The Player (Pixel Gun 3D) The Player's Profile (Speed was equalized and The Player had access to all his clan weapons, medkit, jetpack, and resurrection)

Bubsy the Bobcat (Bubsy) Bubsy's Profile (Speed was equalized, and Bubsy had all of his equipment)

Frank West (Dead Rising) Frank's Profile (Both had prior knowledge, Frank had his full arsenal, Frank had three hours of preparation, and speed was equalized)

Sonic the Hedgehog (Paramount) Sonic's profile (Speed was equalized, 9-B Sonic was used, the battle took place at the Last Corridor and Sonic was bloodlusted)

Hat Kid (A Hat in Time) Hat Kid's Profile (Both were bloodlusted, and speed was equalized)