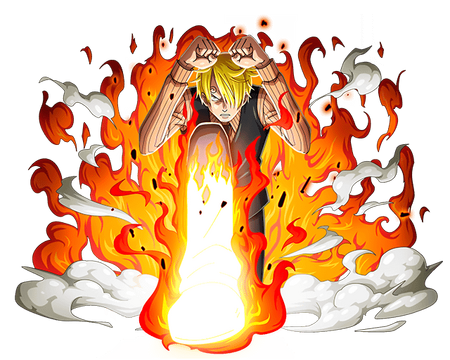 Sanji Vinsmoke, more commonly known as "Sanji" is the crew's chain-smoking chef and a member of the Monster Trio. There is not a dish he cannot cook, a pretty girl he will not try to woo, or something he will not argue with Zoro over. As a chef, he believes that he cannot afford to harm his hands, and so uses a fighting style which uses only his feet called the "Black Leg Style" (Kuroashi no Waza).

Sanji is the third child of the Vinsmoke family, an infamous family of rulers-killers who once conquered the North Blue. Sanji had a highly abusive upbringing and later cut himself off from his family, sick of the ostracism he received for being the only child among brothers and a sister born without genetic enhancements and a reminder of how his late mother was devoted to having her boys retain their humanity.

His dream is to find a legendary patch of sea called All Blue, where one can find species of fish from all over the world. His mentor, former-pirate-turned-restaurant-owner Zeff, is one he shares his dreams with, and Sanji worked under him as a way to pay Zeff back for saving his life when the two were stuck on a rock with barely any food when Sanji was a child.

As of the events of Enies Lobby, his first bounty was 77,000,000 berries. He was, however, frequently unrecognizable since his wanted poster was a poorly-drawn composite sketch.

Name: Sanji, formerly known as Vinsmoke Sanji. He has also called himself "Mr. Prince" and "The Hunter", epithet "Black Leg".

Durability: At least Large Building level+ | Multi-City Block level (Took many attacks from Bon Clay, who is equal to Sanji in physical strength) | Small Town level (remained briefly conscious after Enel's El Thor) | At least Town level+ (Took many attacks from Jabra and was only moderately injured by the end of their fight) | Large Town level (took hits from Oars, remained conscious after getting hit by Kuma's Ursus Shock)

Stamina: Extremely high; can keep up with his Monster Trio peers who both have freakishly high endurance, can walk and fight perfectly fine with broken ribs and other severe injuries for extended periods of time. He at one point shrugged off impalement that went straight through his chest and continued fighting as if nothing happened.

Intelligence: Gifted. Master martial artist and an incredible cook, he has a vast knowledge of food and preparing it, an incredibly good battle tactician and can come up with strategies effectively. He is somewhat skilled when it comes to rearranging the human face (Sanji can rearrange the human face with incredible precision using his kicks, turning someone who would be considered incredibly ugly into someone who would be considered good looking in an instant).

Weaknesses: Sanji refuses to use his hands and knives in battle except under special circumstances. He is a lecher and is often distracted by sufficiently attractive females, and refuses to violently hit any woman for any reason, even if it costs him his life.

Black Leg Style: A martial-arts style that was passed on to Sanji by his mentor Zeff. It is designed to free the use of one's hands and prevent them from being damaged during a battle, something that is disastrous to a chef like Sanji or Zeff. As a fighting style, the style boasts a wide and impressive array of kicks, coupled with super acrobatic skill making it a very versatile fighting technique, allowing Sanji to effectively weave continuous and powerful attacks upon adversaries.

Parage Shot (Cosmetic Surgery Shot): Sanji delivers a barrage of kicks to every single section of the opponent's face, these kicks are so powerful that they can alter the bone structure of the unlucky recipient. And for some reason, this also seems to affect their facial and hair structures.

Diable Jambe: A technique where Sanji heats his leg, adding extreme heat to the impacts of his kicks. After the timeskip Sanji can also nigh-instantaneously spawn vast amount of blazing flames by completely setting his own body on fire as well as those of his foes, improving the effectiveness of the technique. Originally, Sanji needed to spin at high speeds to activate Diable Jambe, heating his leg due to friction, but by the Sabaody Arc, he demonstrated that he was able to activate it mid-attack, which is further reinforced after the timeskip. 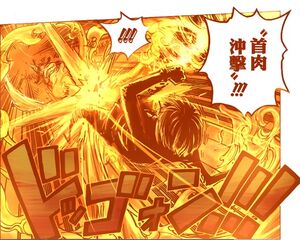