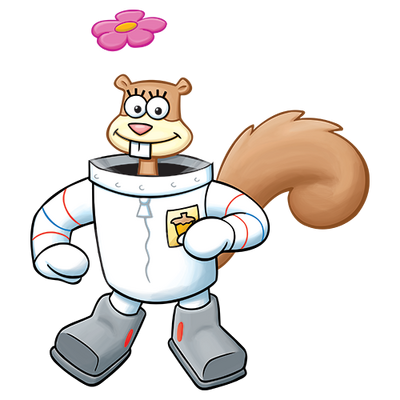 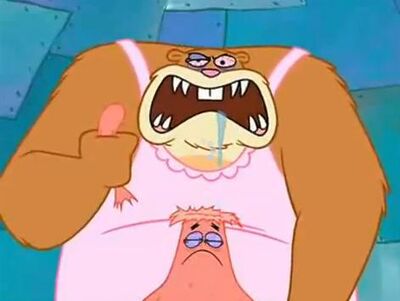 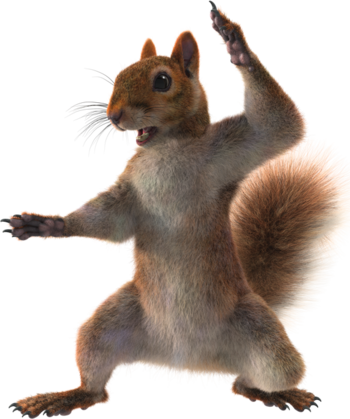 Sandra "Sandy" Cheeks is one of the main cast characters of the eponymous cartoon series SpongeBob SquarePants. Sandy is a squirrel and is SpongeBob's, Patrick's and even Squidward's friend on occasions. Sandy is notable for her characteristics and knowledge of Karate and science.

Powers and Abilities: Small Size (Type 1),  Superhuman Strength and Durability, Genius Intelligence, Underwater Breathing (Type 3),  Proficient in Karate, Explosion Manipulation (Seen here), Invisibility (via Miss Appear suit) Toon Force, 4th Wall Awareness, Weapon Mastery, Pressure Points (Knocked out Squidward with a chop to the head in Squidtastic Voyage), Flight with jetpack and aircraft (Rocket ship and a wooden helicopter), Spaceflight (via spaceship), Vehicular Mastery (master at building and flying her own aircraft), Sleep Manipulation with Knockout Ray, Teleportation, Biological Manipulation, Matter Manipulation, and Fusionism with Molecular Separator Ray, Duplication via Protogenerator 2000, Dimensional Travel and BFR with Vortex Machine (The machine allowed her to travel to Texas. The machine also sent SpongeBob and Patrick to the Doodle Dimension), Transformation during hibernation, Rage Power and Berserk Mode via being woken up during hibernation | All previous except for Small Size, plus she can quickly fire nuts from her mouth

Attack Potency: Varies from Below Average Human level usually to Wall level at her peak (Survived the destruction of Bikini Bottom and can harm others who have as well. Can throw an anchor further than Larry the Lobster) | Multi-City Block level (Comparable to Plank-Ton)

Speed: Athletic Human (The average squirrel is capable of running 20 mph/32 kph), possibly Superhuman (Can keep pace with SpongeBob and Patrick). Far higher flight speed with her jet pack (In "Sandy's Rocket", her jet pack took her from Bikini Bottom to the moon in 9 seconds) | Supersonic (Can keep up with the Invincibubble, reacted to butter-based gunfire)

Lifting Strength: Varies depending on the episode. Typically Below Average, higher at her peak | Superhuman

Stamina: High (Can go on for hours in a fight if need be)

Intelligence: Extraordinary Genius. Sandy is a masterful scientist who has created many inventions such as her tree dome, a trans-dimensional teleporter, and a cloning machine. She's also a skillful fighter, with a near-mastery over karate. Is oftentimes considered comparable to Plankton in intelligence.

Weaknesses: She gets frustrated at the slander of Texas | Can only virtually get nuts to fire from external means

Key: Base | The Rodent