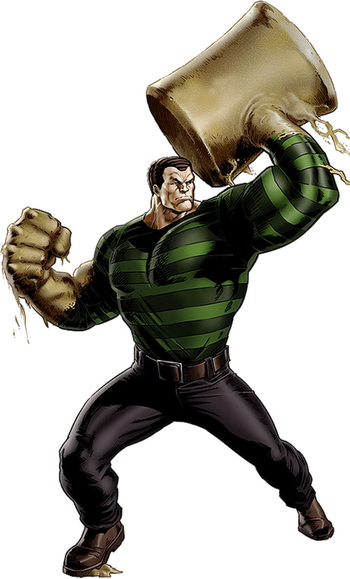 Born in Queens, New York, William Baker made a lot of bad choices that got him expelled from high school and gradually became a small time crook to steal money to pay for his ill daughter's medical treatments. Eventually, going by the alias Flint Marko, he was eventually arrested and imprisoned on Riker's Island. But after escaping from prison, Marko accidentally stumbled into an experimental particle accelerator that molecularly binded him with sand, becoming the supervillain known as "The Sandman".

Powers and Abilities: Superhuman Physical Characteristics, Flight (As Sandstorm), Elemental Intangibility, Sand Manipulation, Weapon Creation, Regeneration (Low-High, can reform his scattered grains unless a substantial portion of his body mass has been isolated), Duplication, Shapeshifting (His power to shape his body into any form he can imagine has been compared to Mr. Fantastic), Body Control, Size Manipulation (Able to grow this large), Resistance against Radiation and Acid

Attack Potency: Large Building level+ (Stronger than Spider-Man, and can damage Mettle. Can destroy buildings), higher by absorbing sand (Can control areas of sand as large as the Sahara)

Speed: Likely Massively Hypersonic+ (Can somewhat keep up with Spider-Man)

Lifting Strength: At least Class M (Stronger than Spider-Man), possibly higher (He can absorb sand and grow in size, which increases his strength)

Durability: Large Building level+ (Able to take punches from Spider-Man). Due to Sandman's density control, he is extremely hard to damage. He can either turn himself into rock-hard sand so that heavy impacts won't harm him, or loosen himself up so that other powerful attacks will simply pass through him without causing damage.

Range: Extended Melee. Due to his ability to change size at will and shape-shift, he can make his body parts longer which gives him a tremendous range advantage.

Intelligence: Average, yet his mastery over his powers and his years of experience fighting Spider-man makes him a troublesome individual to fight without his weaknesses.

Weaknesses: Water (can soften his sand granules therefore, Sandman cannot control them and has to wait for them to dry), Heat (Temperatures of 3,400 degrees Fahrenheit can cause his highly impure silicate composition to fuse into glass), Soul Molecule (Over the years, Spider-Man managed to discover that Sandman's consciousness is located in only one grain of sand, which has Marko's brain pattern and is responsible for commanding the other grains of sand what form to take. With the proper instruments, it can be induced to it different ideas which makes Marko change his form against his will. If that grain is separated from the another and isolated, Marko can't recover his mass.)