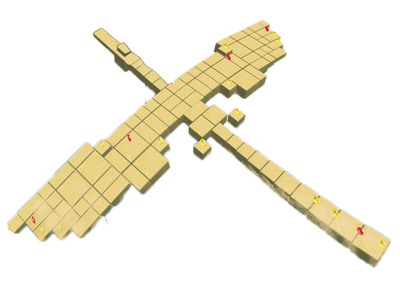 The Sand Bird is a minor character from Super Mario Sunshine who has a small story arc within the game. Along with providing some lore for Isle Delfino and its inhabitants.

As an extraordinary, beloved and dangerous creature, countless people have dedicated their lives into protecting the Sand Bird. For unknown reasons, its egg takes an extremely long time to hatch. With residents at Gelato Beach nursing it for over 100 years.

Over the course of the game throughout several levels, Sand Bird finally hatches and flies away from the island. With Mario having to confront it in order to collect some red coins that were unknowingly on its back.

Classification: Unknown (Does not posses any known biological characteristics. As its name and appearance would seem to imply, it's supposedly a gigantic bird made out of sand. However the properties of its body share no similarities to that of sand)

Attack Potency: Small Building level (Is roughly around this size. Destroyed the Shine Tower just by hatching out of its egg)

Striking Strength: Small Building Class (The spreading of its wings collapsed the monument its egg rested in)

Durability: Small Building level (Can burst through the Shine Tower with no injury whatsoever)

Stamina: Very high (Able to fly around at extreme altitudes for long periods of time without any sign of tiring)

Range: Tens of meters via size

Retrieved from "https://vsbattles.fandom.com/wiki/Sand_Bird?oldid=5112511"
Community content is available under CC-BY-SA unless otherwise noted.