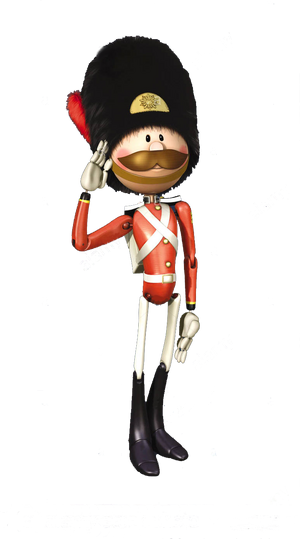 Soldier Sam is one of the antagonists in the film The Magic Roundabout. Brought to life by the evil wizard Zeebad, he was once a simple nutcracker toy that was fixated into the Roundabout. He would be forced to assist Zeebad in his evil deeds throughout the movie, aiding in his search for the three magic diamonds.

Near the end of the film, Zeebad abandons Sam to go to the roundabout and retrieve the last diamond, leaving Sam for dead. Sam comes back later and revolts against Zeebad, only to later be killed by the wizard and have the last diamond taken from his body. Once Zeebad is defeated, Zebedee fixes him up and puts him back on the Roundabout.

Age: Technically only a few days

Attack Potency: At least Street level, likely Large Building level (Should be comparable to the rest of the cast, who can harm him)

Speed: At least Subsonic (Could react to a speeding train and move out of the way), possibly Massively FTL (Should be comparable to the rest of the cast)

Durability: Large Building level (Survived this, and while wounded he didn’t receive any actual bodily damage)

Stamina: Likely Average, possibly very high due to being inorganic.

Start a Discussion Discussions about Sam the Soldier