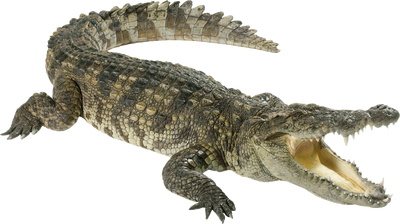 The Saltwater Crocodile is the largest of all living reptiles, as well as the largest terrestrial and riparian predator in the world.

Males of this species can reach sizes up to at least 6.3 m (20.7 ft) and 1360 kg in weight, but possibly more than 7 m (23.0 ft) in length and 2000 kg in weight. However, an adult male saltwater crocodile rarely reaches and exceeds a size of 6 m (19.7 ft) and more typically the length ranges from 4.5 to 5 m with weight range from 450 to 600 kg. Females are much smaller and often do not surpass 3 m (9.8 ft) and 100 kg. As its name implies, this species of crocodile can live in marine environments, but usually resides in saline and brackish mangrove swamps, estuaries, deltas, lagoons, and lower stretches of rivers.

They have the broadest distribution of any modern crocodile, ranging from the eastern coast of India, throughout most of Southeast Asia, and northern Australia.

The saltwater crocodile is a large and opportunistic hypercarnivorous apex predator. Most prey are ambushed and then drowned or swallowed whole. It is capable of prevailing over almost any animal that enters its territory, including other apex predators such as sharks, varieties of freshwater and marine fish including pelagic species, invertebrates such as crustaceans, various reptiles, birds and mammals, including humans. Due to their size, aggression and distribution, saltwater crocodiles are regarded as the most dangerous extant crocodilian to humans, alongside the Nile Crocodile.

Attack Potency: Wall level (Adult males can seriously damage cars, boats or break large metal cages), higher via piercing damage (They have a measured bite-pressure of 3,700 psi or 25.5 MPa, considering it to have one of the most powerful bite forces out of any living organism in the world.) | Street level (Adult female can easily kill a strong adult man or damage a concrete wall), higher via piercing damage

Speed: Below Average Human on land, Peak Human in the water, Superhuman combat speed and reactions (Can grab humans, gazelles and zebras before they can react)

Lifting Strength: Class 5 (Adult males can tear a rope with force on a gap of more than 5 tons, tow a tourist vessel or overcome a prize suffolk stallion. Nile crocodiles, who aren't much smaller in comparison, can stagger mature elephants into the water with almost no effort) | Class 1 (Adult females can overcome a cow-sized animal)

Durability: Wall level (Adult males can withstand headbutts by another crocodile or a collision with a car) | Street level (Adult females exceed any normal human in strength and vitality)

Stamina: High (Large individuals can fight for over 2 hours), but suffer from lactic acid

Weaknesses: Quite slow on land, plagued by lactic acid after long physical activity, its snout is incredibly sensitive