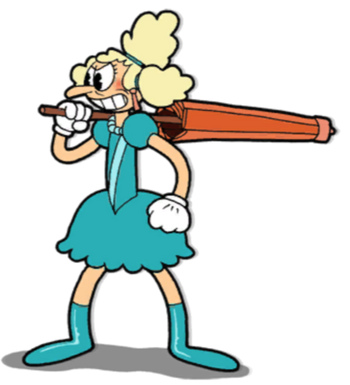 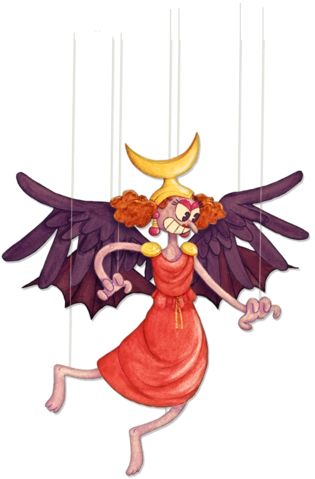 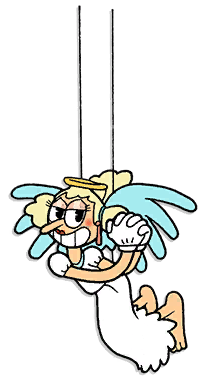 Sally Stageplay is a boss in Inkwell Isle Three fought in Dramatic Fanatic. She was seen in the E3 2017 trailer for a couple of frames.

Sally Stageplay's battle phases take the form of four scenes that make up a complete production, and the player must defeat her in all four phases to win.

In update 1.2, an alternative route was added to the fight where, if the player uses the pink hearts to jump onto the cherubs hanging from either side of the stage, the chandelier in the background can be dropped onto the husband. The fight will then play out in a similar production, but with Phase 2 taking place in a different location (A nunnery and the husband reappearing in a god form in Phase 3.

Powers and Abilities: Superhuman Physical Characteristics, Elasticity, Danmaku, Flight (Can glide across the map with her umbrella), Teleportation (Can teleport with her umbrella), Creation (Can create and throw fans from nothing, can create a flying heart by blowing a kiss, can create mouse toys from spinning her umbrella), Summoning (Can get children to throw bottles at their target, can summon someone with a tidal wave costume run across the screen, can summon cardboard meteors and lightning, will have an audience throw roses into the area), Homing Attack (The umbrella will target their opponent when not being held by her)

Speed: Subsonic (Can keep up with a disappearing Cuphead)