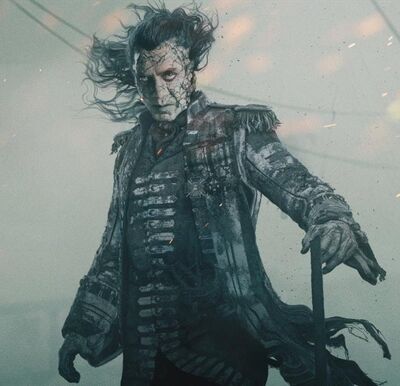 Armando Salazar was the legendary and ruthless, yet terrifying pirate hunter who haunted the Caribbean. Hailing from Spain, Salazar was a Spaniard, a high-ranking officer of the Spanish Royal Navy and the decorated capitán of the powerful pirate-hunting warship, the Silent Mary. For many years, Salazar terrorized the seas and killed thousands of pirates until his spectacular fall from grace when a young pirate named Jack Sparrow outsmarted the ruthless pirate killer and led him to his death in the mysterious Devil's Triangle.

However, through the dark powers of the Triangle, Salazar was resurrected more powerful than ever, but cursed to wander the world as a ghost for eternity. Hungry for revenge, Salazar escaped from the Triangle's relentless hold and led his crew of deadly ghost sailors on a mission of vengeance to obtain the legendary Trident of Poseidon to finally eliminate pirates and kill Jack Sparrow to avenge the life that was taken from him. During the battle for the Trident, Henry Turner destroyed the Trident and Salazar recovered his human form along his crew, but was wounded by Hector Barbossa during his attempt to board the Black Pearl via the anchor and drowned along his remaining crew when the ocean closed.

Powers and Abilities: Superhuman Stats, Peak Human Combat Speed and Reactions, Master Swordsman, Immortality (Types 1 and 7), Possession, Intangibility, has complete control over his ship: the Silent Mary, Underwater Breathing (Type 2), with the Trident of Poseidon: Water Manipulation, Weather Manipulation, can control the creatures of the sea

Attack Potency: Wall level (Easily snapped a neck). Building level with his ship (Can easily slice through other ships). Town level with Trident of Poseidon (Was able to split the ocean)

Lifting Strength: At least Class 1 (It takes 1250 lbs of force to snap a neck)

Retrieved from "https://vsbattles.fandom.com/wiki/Salazar?oldid=4448951"
Community content is available under CC-BY-SA unless otherwise noted.