VS Battles Wiki
Register
Don't have an account?
Sign In
in: Characters, Touhou Project, Age Users,
and 28 more 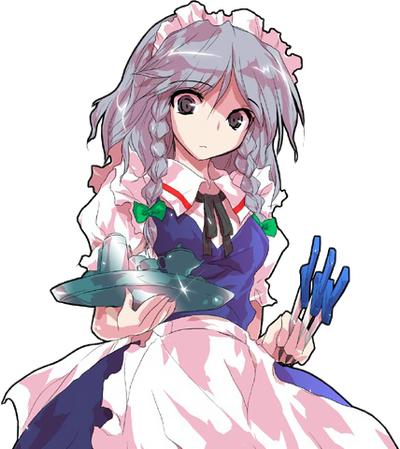 Sakuya Izayoi is the chief maid of the Scarlet Devil Mansion. Although she is the leader of the maids there, she usually has to do all of the work herself, as the fairy maids are completely useless. She also helps resolve incidents (usually only those pertaining to the mansion), alongside the local shrine maiden and the black and white witch. Her origins are unknown; she is said to have been given her name by Remilia, and Akyuu theorizes that she was a vampire hunter.

Name: Sakuya Izayoi (given by Remilia, real name is unknown)

Age: Claimed to be at her late-teens in 2006, suggested to be hundreds of years old

Powers and Abilities: Superhuman Physical Characteristics, Flight, Danmaku, Master Knife User, Space-Time Manipulation (Can stop, accelerate, slow, erase, and compress time, and can similarly manipulate space), Age Manipulation (By accelerating time, she can age objects and beings), Density Manipulation (She can make herself massless), Existence Erasure (By erasing the time of something, she can completely erase it from space and time), Forcefield Creation, Non-Physical Interaction (Can harm Phantoms and Evil Spirits with her regular attacks), Summoning (Can summon alternate versions of herself from other universes), Weapon Creation (Can conjure knives from out of nowhere), Resistance to Mind Manipulation (Can look at the True Moon without going insane and dying, unlike most humans)

Attack Potency: High Universe level, possibly Universe level+ (Should be somewhat comparable to other incident resolvers). She can ignore conventional durability with her abilities (She can erase objects and beings from all of time and accelerate aging rapidly).

Speed: Massively FTL+ (Comparable to other incident solvers such as Reimu and stated to move faster than light)

Stamina: Very high (fought for an entire day in Perfect Cherry Blossom and continuously in the fighting games)

Range: Extended melee range (Sakuya's knife slashes can reach much further than should be possible), at least tens of meters with Danmaku (Her throwing knife range is said to be at least 20 ken, which is around 36 meters), at least Planetary with Space-Time Manipulation (Controls space and time within the Scarlet Devil Mansion, making it much larger than it looks on the inside, and caused the eternal night in Imperishable Night, keeping the Moon from setting from Earth), likely far higher (She can summon alternate versions of herself from parallel universes and can erase objects and people from all of time and space).

Standard Equipment: Many, many silver throwing knives, and a silver pocket watch that she can also use to stop time.

Intelligence: As one of Gensokyo's foremost incident resolvers, Sakuya is an experienced and skilled combatant. She is extremely skilled in the use of throwing knives, said to be accurate enough to strike an apple on the head of a fairy from over 30 meters away.

Time Manipulation: Sakuya can manipulate the flow of time - she can slow it, accelerate it, erase it, or even stop it. She can also compress the flow of time to make both past and future to exist at the same time, making the same object from different timelines be in many places simultaneously. By doing this, all her attacks will hit the enemy at the same time due to the different timelines existing simultaneously. She can apply her time manipulation on a smaller, more precise scale - on locations and objects.

By accelerating time, she can age objects and things. She can reverse time - to an extent - although this is mostly limited to moving things to where they were before. And by erasing the time of an object, she erases its present and future, essentially erasing it from existence. She can also summon alternate versions of herself from other timelines. As space is linked to time, Sakuya can manipulate space as well - she can shrink and increase distances, and through her power, increased the size of the Scarlet Devil Mansion while making it look smaller on the outside.

While it's been stated that Sakuya can't actually stop time, but instead merely move at extremely high speeds without any mass, this is very inconsistent with its portrayals.

Sakuya in The Embodiment of Scarlet Devil 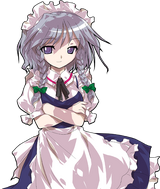 Sakuya in Immaterial and Missing Power 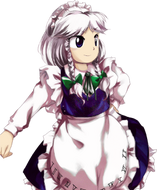 Sakuya in Phantasmagoria of Flower View 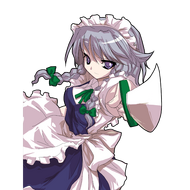