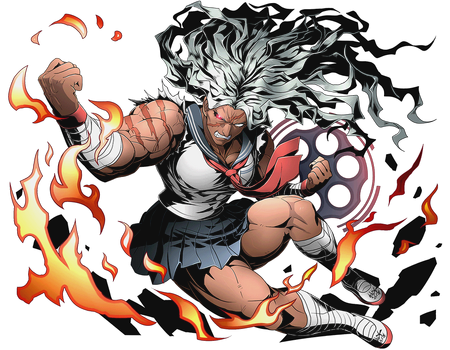 Sakura Oogami is a member of the 78th class of Hope's Peak Academy with the title "Ultimate Martial Artist" for her mastery of hand-to-hand combat and going on a 400-win streak in tournaments around the world. Although her surly and masculine appearance tends to intimidate those around her, she cares deeply for those closest to her and is willing to face down any threat to protect them.

Attack Potency:  At least Building level+, likely Large Building level (As "the strongest person in the world" and the best fighter in the series with the exceptions of Kenshiro and Izuru, she should be superior to the "Ultimate Wrestler" Gozu and Nekomaru. Superior to Mukuro and Genocider Syo)

Speed: Supersonic (Fought and was winning against Mukuro)

Stamina: High (She can fight for extended periods of time without stopping)

Intelligence: As the "Ultimate Martial Artist", Sakura is a master hand-to-hand combatant who can easily hold her own against Monokuma's machinations and held a 400-win long international winning streak in tournaments. As a result, she also holds the title of "the strongest person in the world", and was only done in by her choice to commit suicide to save the lives of her classmates.