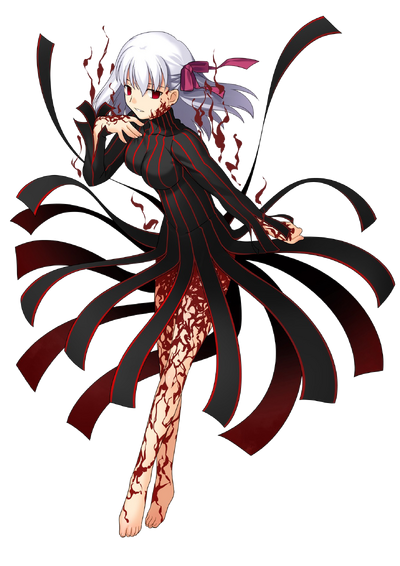 Sakura Matou is the Master of Rider in the Fifth Holy Grail War, though, as she dislikes conflict, her brother Shinji acts as Rider's master in her place in the Fate and Unlimited Blade Works routes. Originally the second daughter of Tokiomi and Aoi Tohsaka, and the younger sister of Rin, she was adopted into the Matou family to act as the successor of their mystic arts, as Shinji lacked any magical ability of his own.

Abused and mistreated by both her grandfather and brother, she was forcibly implanted with the Matou family's Crest Worms, which have assimilated into her body and magic circuits. These act as her Magic Crest, continually feeding on her energy when active and causing extreme pain. She is also turned into an incomplete, secondary Lesser Grail, the Black Grail. Going inactive throughout most of Fate/stay night, she becomes active as a Lesser Grail in Heaven's Feel due to Shirou's actions and Kirei's machinations.

Tier: 9-A. Unknown with the Black Shadow. 6-C with Shadow Giants

Powers and Abilities: Superhuman Physical Characteristics, Magecraft, Limited Information Analysis, Darkness Manipulation, Absorption (can absorb other's magical energy by shooting them with Matou magecraft, can take in and absorb others with the Black Shadow, which also breaks organic matter down into magical energy with a touch), can absorb others into a completely separate dimension of darkness, Corruption (The Black Shadow destroys the minds of those it affects, and can corrupt Servants and distort their mentality), Soul Manipulation (A Lesser Grail created to absorb and collect souls, which she burns for magical energy), Teleportation (Can travel through shadows to travel between two points nearly instantaneously) Summoning (Can summon Shadow Giants), the Black Shadow is intangible, incorporeal, and possibly immortal (Type 5; Shirou notes that it may not even have a concept of death), Resistance to Magic (All magi have essential resistance to magical effects), Regeneration (Low-Mid; her regeneration should be at least comparable to Saber Alter's, she regenerated from Gilgamesh destroying everything below her stomach, and was able to rip Zouken's Crest Worm out of her heart, which would usually kill her, before healing)

Attack Potency: Small Building level (Despite her virtually limitless mana, her output is only equal to Rin's). Unknown with the Black Shadow (Does not rely on physical power, instead of absorbing its foes and destroying their minds. Said to be capable of overwhelming any Servant summoned by the Grail, instantly shattered Lancer's runic barrier, which can block great Noble Phantasms, overcame and absorbed Berserker and even Gilgamesh, but couldn't pierce Shirou's skin when he was transforming into swords). Island level with Shadow Giants (Their power matches a Noble Phantasm, and Gáe Bolg: Soaring Spear that Strikes with Death is said to be average in terms of power for a Noble Phantasm). Ignores conventional durability with the Black Shadow (It breaks down and absorbs whatever it touches, consuming souls and destroying minds).

Speed: Subsonic with Massively Hypersonic reactions and attack speed (Kept up with Rin and can tag Servants, confident that she could beat Rider).

Durability: Human level. Unknown with the Black Shadow (Potentially lacks a concept of death and is intangible, making it incredibly difficult to harm and destroy). Island level with Shadow Giants.

Stamina: Virtually limitless. She has almost a trillion units of magical energy, as compared to the 25 - 100 for average magi. Through her connection to the Grail, she is also connected to the "other side" of the Grail, the Swirl of the Root.

Range: Melee range, further with magic, Tens of Meters with the Black Shadow and Shadow Giants (The Black Shadow can swallow an area of fifty meters all at once)

Intelligence: Average. Sakura is a relatively ordinary high school girl, and though she is a magus, she lacks adequate knowledge of magic and warfare.

Weaknesses: Sakura has no combat experience and is a very poor magus. Her crest worms are continually feeding on her magical energy, so without the Grail, she rarely has any mana to cast spells. The Grail gradually corrupts her mind and will overwrite her souls with the data of Servants as they die and are absorbed. As Dark Sakura, she is incredibly overconfident and sadistic, and once she is put into a disadvantage, she will start to panic.

Magecraft: While Sakura's potential as a magus is comparable to Rin's, the harsh, torturous process of becoming a Matou magus, and Zouken's uncaring actions have squandered it. She has an affinity of Hollow or Imaginary Numbers, but she is forced to utilize the Matou's traditional element of Water instead. Sakura has little knowledge of magic, lacking any formal education in its proper use. When her Magic Crest (the Crest Worms assimilated into her body) is active, her energy is drained continuously to the point that she can't even cast spells.

Under duress, and when supported by her connection to the Grail, she can use magecraft. She can use the Matou's spell of absorption to drain the magical energy of others, and her Hollow affinity makes the magic she casts with it extremely effective against spiritual entities. By combining both, and with the support of the Tainted Grail, she can easily affect physical beings and imprison others in a separate dimension made of shadows.

1 of 2
Add photo
The Black Grail: Sakura has been implanted with the shards of the destroyed Grail by Zouken, transforming her into an incomplete, secondary Lesser Grail, the Black Grail. These shards have been combined with the Crest Worms inside of her, allowing her to act generally under normal conditions. Initially, just an experiment in creating something to collect souls, one that wasn't meant to see any real use, the events of Heaven's Feel allow her to become active. She adapts quickly to her new role, capable of remaining active even as she absorbs more and more Servants.

The contents of the Grail, a Black Shadow, come into the world and acts as Sakura's shadow, roaming Fuyuki at night to drain magical energy from others, ultimately consuming them entirely. Initially only feeling slight aftereffects from its feedings, she later begins to have uncontrollable visions of it acting, and eventually becomes able to see and hear through it directly.

It is a Cursed Boundary Layer, something incapable of taking shape usually, but given form by Sakura's negative emotions and her Hollow element, and pursues those she hates. It is intangible and incorporeal, incapable of being affected by conventional attacks, and potentially lacks even a concept of death. Its touch corrodes all it comes into contact with, carrying on the curse of All the World's Evil, dissolving organic matter and breaking it down into magical power, consuming their souls as well. It can spread out over an area like mud, or absorb all the energy in an area to explode and swallow everything around it. It can also be used to repair the damage done to Sakura's body, teleport her, and restrain others with tentacles so that they can be easily consumed.

The Servants that come into contact with the Shadow are instantly affected and are incapable of even opposing it. They rot everywhere it touches them, losing sensation as their body ceases to exist and is absorbed into the Shadow. While Heroic Spirits are greatly affected and lose consciousness quickly if not instantly, Servants that are closer to it in nature (such as Antiheroes) can resist its effects somewhat, but their energy is still drained.

When Sakura rejects Zouken's control and becomes Dark Sakura, a monstrous distortion of her usual self, the Shadow takes the form of the Command Spell that drapes her body. She is corrupted by All the World's Evil, losing her reasoning and causing her emotions to spiral out of control. She is unpredictable and violent, and despite her overwhelming power, she is still unused to combat and quite unstable. Her strength is such that she could turn into a threat that would require the Counter Force itself to step in, and using All the World's Evil, she could drown the world in a tainted mud and eradicate humanity.