VS Battles Wiki
Register
Don't have an account?
Sign In
Advertisement
in: Naruto, Characters, Anime Characters,
and 32 more 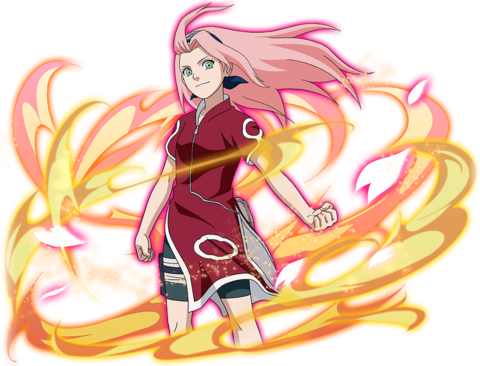 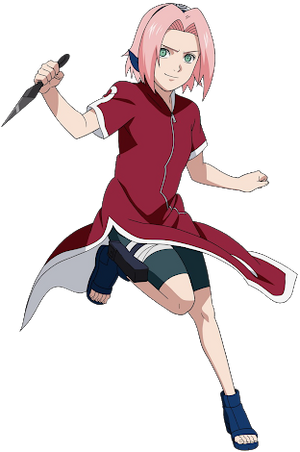 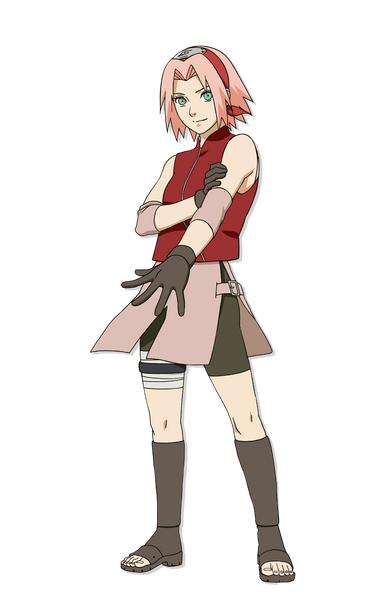 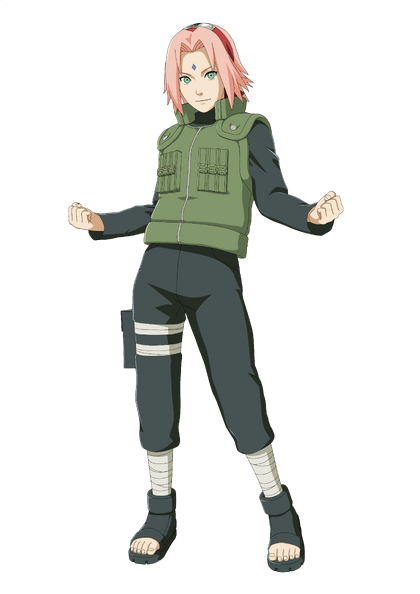 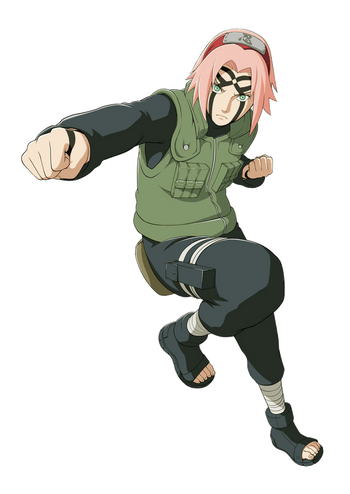 Sakura Haruno, now known as Sakura Uchiha, is a kunoichi of Konohagakure. She is appointed as a member of Team Kakashi but quickly finds herself ill-prepared for the duties of a ninja and the complications of her team-mates' lives. By training under her master, Tsunade, she becomes a strong kunoichi and an excellent medical-nin, capable of facing the challenges of experience as a ninja, as well as help and protects her friends and loved ones when they need her.

All previous abilities to a greater extent, Master Hand-to-Hand Combatant, Analytical Prediction (Tsunade taught and trained Sakura to master her evasion techniques, which allowed her to gradually read someone's attack patterns and start dodging accordingly, even from blindspots), Statistics Amplification (Can greatly enhance her strength and strikes with chakra. She can also release the Strength of a Hundred Seal on her forehead to gain access to her accumulated chakra and to greatly increase her strength even further), Healing (She is a very talented medical Ninja, with more skill and talent than Shizune. She was personally taught by Tsunade herself, and is now skilled enough to heal most ailments and injuries effortlessly), Earth Manipulation, Water Manipulation, Limited Durability Negation (Can perform internal damage like cutting muscle tendons and tissues without directly affecting the skin), Poison Manipulation (Can produce and imbue her weaponry with deadly poisons), Sleep Inducement (Can create and use knockout gases)

All previous abilities to a greater extent, Regeneration (Low-Mid; Scales to Tsunade's application of Creation Rebirth, which allows her to regenerate organs and limbs, heal from complete impalement, and even survive bisection. She also regenerated from a thick chakra tail being plunged through her midsection), Immortality (Type 3; She should scale to Tsunade's application of Creation Rebirth. She can survive and regenerate from lethal injuries, such as complete impalement, for an extended period of time), Immense Pain Tolerance (She can withstand grueling and life-threatening injuries, such as Kido's thick Kyuubi Cloak tail being plunged through her stomach, without succumbing to the pain or losing the ability to fight), Biological Manipulation and limited Regeneration Negation (When she fought Kido and had to work around his regenerating chakra cloak, she combined her chakra-enhanced fists with her medical Ninjutsu in order to simultaneously heal the damage resulting from the punches, eventually killing the affected cells from over-replication), Summoning (Able to summon Katsuyu, a giant slug who can heal targets, manipulate acid, and split up into thousands of smaller parts of herself to avoid damage or relay information telepathically)

All previous resistances, Likely Resistance to Ice Manipulation (Possesses better chakra control than Kakashi), and Poison Manipulation via antidotes and Medical Ninjutsu (Can analyze and produce antidotes to even the deadliest of poisons. These antidotes can completely neutralize the effects of any poison, even while being exposed to the poison directly. Medical Ninjustu can also heal from the effects of, and even directly remove, poison)

All previous abilities, plus Resistance to Electricity Manipulation (She was unaffected after being electrocuted by Kido's Lightning Clone, and could physically hold back his Raiton Bear Trap without any ill effects by concentrating her chakra)

Attack Potency: City Block level (Fought against Zaku Abumi, despite being exhausted) | City level (Should be superior to Naruto and Kakashi, as they were frightened by her strength[1]. Drew blood from Sai and sent him flying with a single punch while holding back[2]. Shattered Sasori’s Hiruko puppet[3], Third Kazekage puppet[4] and multiple others[5]) | City level (Stronger than before). Large Mountain level+ with the Strength of a Hundred Seal (Hashirama Senju stated that her strength might be greater than Tsunade’s, and she doesn’t have to waste any chakra on maintaining a youthful appearance like Tsunade does[6]. Stated to have the strength of Tsunade[7]. 100H Sakura, KCM Naruto and EMS Sasuke were all portrayed as being comparable to each other[6][8][9][10]), higher with Byakugō | At least Large Mountain level+ (Much stronger than before. Fought and singlehandedly defeated V2 Kido[11]), higher with Byakugō

Striking Strength: City Block Class (Fought against Zaku) | City Class (Capable of harming Sai and destroying Sasori’s puppets) | City Class (Stronger than before). Large Mountain Class+ with the Strength of a Hundred Seal (At least comparable to Tsunade), higher with Byakugō | At least Large Mountain Class+ (Much stronger than she was during the War Arc), higher with Byakugō

Intelligence: Gifted (She has book smarts, advanced knowledge of healing, and medical techniques. She is noted to be very observational and analytic in combat, and usually fools or misleads her enemies with varying tactics, making them drop their guard and leaving them open to attack)

Weaknesses: The Creation Rebirth cells can only split a certain number of times in a lifetime, and by speeding up this process, users of this technique are shortening their natural lifespan. She has feelings for Sasuke, and was initially lacking in confidence for her skills and could often be prone to breaking down into tears upon seeing her loved ones get hurt, but that has since changed as of Naruto Chapter 632. She will put herself in harms' way to protect innocents and loved ones