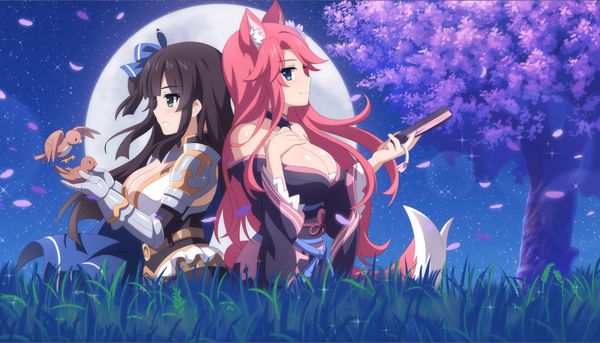 Sakura Dungeon is a game developed by Winged Cloud, and tells the story of the former dungeon lord and fox spirit Yomi as she, Ceri and other possible allies attempt to take back her dungeon, which was taken by her through a betrayal that led humans into sealing her away.

Most characters are 9-B, but several fighters either scale to 8-C from creating lightning, 7-B for creating a "horrible, black storm", and the top-tiers scale to 6-C by being hundreds of times as powerful as the previous, and being comparable to those that create pocket dimensions the size of a large desert.

Technology-wise, there seem to be a surprising amount of modern technological devices (such as cameras), but most weapons are average medieval weapons (tough some are oversized, such as a hammer with a human sized hammerhead). However, the alien fox spirits have spaceships capable of MFTL+ travel speeds, nanomachines that can replicate effects comparable to magic, and special carbon fiver armors more effective than any other kind of armor known.

The magic is rather powerful, with even weaker mages being able to easily shatter armor and even summoning lightning, while those more adept can summon entire storms, and even create pocket dimensions the size of a large desert. Hax wise the magic is relatively weak, tough some forms of magic can forcefully teleport others away, terrify them or poison them to bypass resistance. It is unknown if the descriptions and names of spells like flashfreeze and combust are true, or just flowery language.

The story seemingly takes place in the stereotypical fantasy setting with swords, magic, other species (such as elves) and monsters. However, other than normal monsters, there are also monster girls (tough they are technically never called that, and are also just referred to as monsters), mostly humanoid monsters with somewhat stereotypical personalities (a tiger girl is ferocious, a cat is mischievous but lazy, etc). However, it is later revealed that there are several being in space, some of which have technology so evolved that they can cross from other galaxies to this world in a few minutes.

There are stated to be infinite alternate worlds, a lawless "void" in-between them, and an incomprehensible realm called the abyss, a realm which normally shouldn't even have width, length and width or other such human concepts.