VS Battles Wiki
Register
Don't have an account?
Sign In
Advertisement
in: Characters, One-Punch Man, Male Characters,
and 18 more 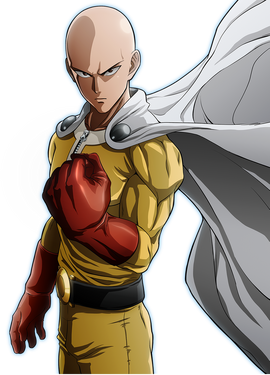 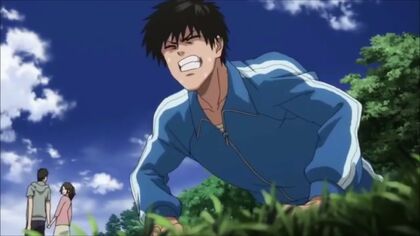 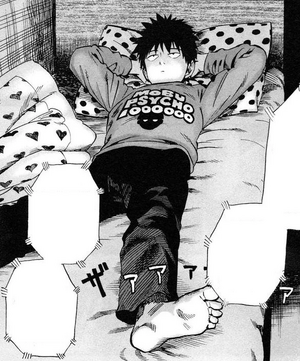 Saitama is a human from Z-City who; through rigorous (sort of) training broke through his human limiters and achieved unbelievable strength and abilities. Never breaking a sweat, the name One Punch Man is fitting for the effortless wins Saitama has achieved through the series. Never going beyond a simple brawl, his sheer strength, speed, and sower have effortlessly mowed down anyone in his way.

A parody character essentially; Saitama is a play on generic, flamboyant battle manga protagonists, who struggle greatly to achieve victory against overly evil characters. Saitama breaks the trend through his lethargic and typically emotionless personality, combined with massively overwhelming strength. Also, due to his effortless wins through the series, we have yet to see his true, full capabilities; getting slightly more "serious" as the series progresses, he casually puts down any new enemy on his radar.

Superhuman Physical Characteristics, Accelerated Development (Training; Physical Stats. Became ridiculously stronger during his training. Genos theorized that even Saitama himself cannot explain the secret to his power), Supernatural Willpower (Was able to break his limiter through sheer will and effort alone, despite being just a regular human) and Resistance to Pain Manipulation (Was able to endure through high amounts of pain through his intense training regime, to the point Saitama stated his training regime nearly killed him)

Superhuman Physical Characteristics, Acrobatics/Self-Momentum (Could easily dodge bullets from Boros' ship while in the air), Enhanced Senses, Afterimage Creation (Created countless afterimages), Pseudo-Flight (Could move and change his momentum and keep afloat in the air, Air Manipulation and Shockwave Creation with his attacks), Non-Physical Interaction (Was able to physically interact with Phoenix Man's spiritual/mind plane), Limited Telepathy (Heard Phoenix Man and Child Emperor's mental conversation), Heat and Fire Resistance (Was unfazed by Genos' attacks. Can submerge in lava with no trouble. Was unaffected by Boros' attacks, which could melt entire sections of his ship), Resistance to Ice Manipulation (Instantly broke free from being frozen by Withered Sprout), Overwhelming Aura (Completely scared Carnage Kabuto), Can hold his breath in space for an extended period of time

Attack Potency: Wall level (Should at least be comparable to himself as a 12 years old child) | Small Building level (Survived two blows from Personification Of A Light Pull Cord), up to at least City Block level (After breaking his limiter and going through the process of fully removing it, became strong enough to effortlessly one shot both Light Pull Cord and even 170,000 Year Magicicada Nymph) | At least Small Planet level (Casually overpowered Orochi's Gaia Cannon, overpowered Boros' Collapsing Star Roaring Cannon attack while holding back significantly[note 1])

Stamina: Unknown (Has not exerted himself even once so far)

Intelligence: Average. Saitama seems to be single-minded at times, chasing a mosquito relentlessly even after sustaining a blast that destroyed his clothing completely. Due to his laid-back attitude, he lacks any sort of refinement in his techniques and is primarily a brawler in combat, simply punching a target until they're blown to pieces (which he usually does not need due to his overwhelming power). Additionally, he is lacking academically, only barely passing the hero exam due to his poor score on the written exam. Nevertheless, he displays great control over his speed and strength, stopping his fist within a hair's breadth of Genos' face to avoid hurting him and generally holding back in fights to prolong them. He has shown to be a good judge of character, however, being able to tell people's real motives (such as Garou and Fubuki) quite quickly

Weaknesses: He doesn't take anything seriously initially, and tends to hold back to possibly prolong a fight. Saitama has no true martial arts training, as he simply just fights.

Feats from the webcomic are marked with (W).

Drone (Transformers) Drone's Profile (Both were 8-B, Decepticon Drone was used, the battle took place near Saitama's home, they started 5 meters apart and Speed was equalized)

Senku Ishigami (Dr. Stone) Senku's Profile (Saitama in his 9-B key, speed unequal, and Senku was given 2 hours of preparation)

Ranfan (Dragon Ball) Ranfan's Profile (Speed was equalized, the fight took place in the World Tournament Arena and Saitama was in his 9-B key)