VS Battles Wiki
Register
Don't have an account?
Sign In
Advertisement
in: Tier 9, Tier 9-B, Tier 9-A,
and 29 more 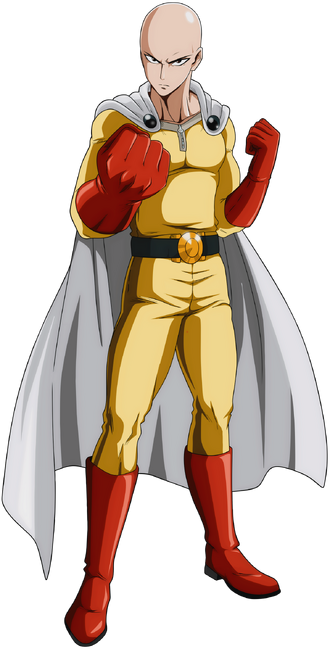 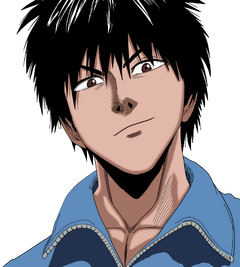 Saitama is a human from Z-City who; through rigorous (sort of) training broke through his human limiters and achieved unbelievable strength and abilities. Never breaking a sweat, the name One Punch Man is fitting for the effortless wins Saitama has achieved through the series. Never going beyond a simple brawl, his sheer strength, speed, and sower have effortlessly mowed down anyone in his way.

A parody character essentially; Saitama is a play on generic, flamboyant battle manga protagonists, who struggle greatly to achieve victory against overly evil characters. Saitama breaks the trend through his lethargic and typically emotionless personality, combined with massively overwhelming strength. Also, due to his effortless wins through the series, we have yet to see his true, full capabilities; getting slightly more "serious" as the series progresses, he casually puts down any new enemy on his radar.

Attack Potency: Wall level (Should be superior to his 12-year-old self. Defeated Crablante by tearing out his eye along with the rest of his insides) | Small Building level (Fought Light Pull Cord while severely tired and weakened. After surpassing his limits, he one-shot Light Pull Cord), up to City level (Has saved the world many times, defeating countless mutants, terrorist organizations, and creatures which might include threats on the same scale as the Monster Association Cadres), possibly Multi-Continent level (Tatsumaki's telekinesis was completely ineffective against him, with she and Fubuki stating that Saitama surpassed her powers, and Fubuki comparing him to an Above Dragon-level threat) | At least Moon level (Effortlessly overpowered Post-Sage Centipede Garou while significantly holding back not to kill him. Blew away Evil Ocean Water. Overwhelmed Boros' Collapsing Star Roaring Cannon with one Serious Punch while holding back. Overpowered Orochi's Gaia Cannon and casually one-shot him. Created an immense crater on the moon by jumping from it), likely far higher (Saitama is likely way more powerful than this depiction of his current feats, since he has ended every battle thus far effortlessly. Stated that he could obliterate the whole planet if he felt like it.)

Speed: Superhuman (Can outpace Crabrante) | Supersonic+ (Early into his training, he became fast enough to save a child from being ran over at the last second), up to possibly Relativistic+ (Nearing the peak of his training, he allegedly managed to outrace his own reflection in a mirror. However, the legitimacy of this feat is yet unconfirmed) | At least FTL, likely far higher (Considerably faster than Post-Sage Centipede Garou. With just one hand, he easily deflected the attacks of a fourth-armed Garou)

Lifting Strength: Superhuman (Strong enough to tear out Crabrante's insides) | At least Superhuman (Battled monsters like Light Pull Cord, who is able to throw cars and trucks), up to possibly Class P (Stated by Tatsumaki to have surpassed her powers) | At least Class Z, likely far higher (Significantly stronger than Post-Sage Centipede Garou, who displaced multiple kilometers of the Earth's crust)

Durability: Wall level (As a 12-year-old, he was able to survive a tackle from Piggy Bancon that left a large crater. Took multiple attacks from Crablante, who could fracture concrete) | Small Building level, up to City level, possibly Multi-Continent level (Took Tatsumaki's psychic powers with barely any inconvenience) | At least Moon level (Effortlessly endured Post-Sage Centipede Garou's Extreme Fa Jin strike without a scratch), likely far higher (He has never been shown to be damaged after finishing his training)

Stamina: Superhuman (Endured the pain of multiple strikes from Crabrante) | Superhuman (Able to tolerate great amounts of pain through his relentless training regimen. His training was so hard that it almost ended up killing him) | Unknown (He has not exerted himself even once so far after completing his training)

Intelligence: At least Average (Saitama seems to be single-minded at times, chasing a mosquito relentlessly even after sustaining a blast that destroyed his clothing completely. Additionally, he is lacking academically, only barely passing the hero exam due to his poor score on the written exam. However, Saitama seems to have some experience in fighting techniques and is an excellent brawler in combat, pressuring his opponents relentlessly if he goes more serious. He displays great control over his speed and strength, stopping his fist within a hair's breadth of Genos' face to avoid hurting him and generally holding back in fights to prolong them. Saitama has been shown to be a good judge of character, being able to tell people's real motives, such as those of Garou and Fubuki quite quickly.)

Weaknesses: He doesn't take anything seriously initially and tends to hold back to possibly prolong a fight.

Feats from the webcomic are marked with (W). 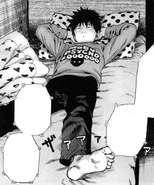