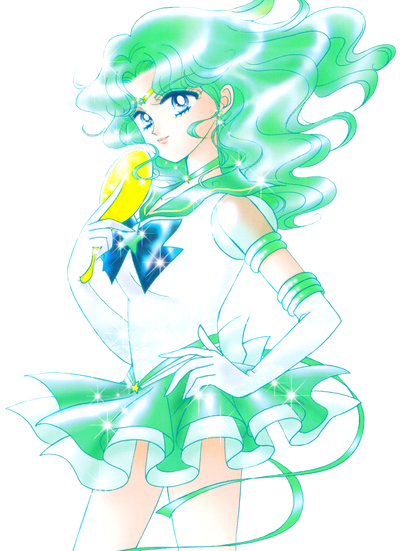 Sailor Neptune is one of the four Outer Senshi of the Solar System and was the ninth Sailor Senshi to be introduced in the manga. Her civilian identity is Michiru Kaiou. Her attacks are based around the ocean or sea, precognition and powers granted by her mirror. This is the original depiction of the character created by Naoko Takeuchi.

All previous abilities enhanced, Powers via Crystal through her Planetary Object (with Sailor Crystal which lets her access higher forms and directly tap into the power of her planet), Non-Physical Interaction, Resistance to: Sleep Manipulation and Nightmares

All from previous to a far higher degree, Energy Manipulation

All previous abilities plus Essence Manipulation (Can remove star seeds, Manipulation of the Totality of one's being; Energy, Matter, Mind, Soul and Spirit) via the Galactica Bracelets, Self-Sustenance (Type 1 & 3)

Attack Potency: At least Solar System level, likely Multi-Solar System level (Comparable to Sailor Uranus). Higher with Talisman (The Three Talismans together held back Pharaoh 90[1]) | At least Galaxy level, likely Multi-Galaxy level (Superior to Super Guardian Senshi) | High Universe level (Comparable to the strongest Sailor Crystals in the Universe whose powers are infinite, Galaxia attacked the Outer Senshi themselves[2] instead of sending her Sailor Animamates to fight them[3]) | Universe level+ under Sailor Galaxia (Additional boost from the Galactica Bracelets increases power far above normal, threatened Sailor Moon to unrecognizable degree[4]), can ignore durability by destroying star seeds and manipulating someone's essence via the Galactica Bracelets. | Unknown with the Lambda Power[note 1]

Lifting Strength: Stellar (Stronger than Sailor Moon who can move on Nemesis) | At least Stellar | Unknown

Stamina: Fairly high. She flew to Neptune without difficulty in the Stars arc and destroyed various enemies without looking tired. She is also a skilled swimmer, so she has bulit up stamina as well. | Likely limitless under Sailor Galaxia | Unknown with the Lambda Power

Intelligence: Very intelligent. She attended a school reserved for geniuses simply to spy on her enemies in the Infinity arc of the series and excelled in academics and the arts without much effort. She's also been shown to have sharp intuition and some form of precognition, which is enhanced by her Deep Aqua Mirror.

Weaknesses: In-Character she is less likely to use her Talisman due to it having a very large obvious energy signature and if the three Talismans are gathered they will summon Sailor Saturn, whose destiny is to destroy the world. Needs to maintain concentration to use her magic. | None notable normally, under the control of Sailor Galaxia, she loses her life if her Bracelets are destroyed | Unknown

Magic: Michiru is a talented sorceress, who can create images and illusions at will and can channel her magic through her violin music, able to paralyze opponents.

Henshin: Michiru can use the Power of her Sailor Crystal to Transform into Sailor Neptune and then her stronger forms. The Henshin Power can also be used to teleport through dimensions or reverse enemy-magic.

The Highest Conventional State of Sailor Senshi, in this state Sailor Neptune's powers are comparable with the strongest Sailor Crystals in the Universe. This state increases her stats and her attack power by a drastic degree.

At the end of the series, Michiru absorbed the Lambda Power and could exist in "Perfectly Heavenly Form" within the Galaxy Cauldron which normally erases existence.