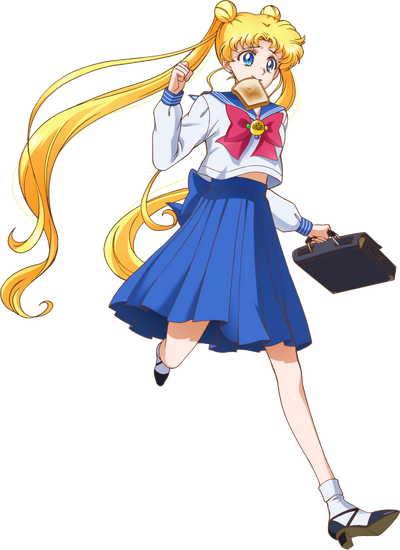 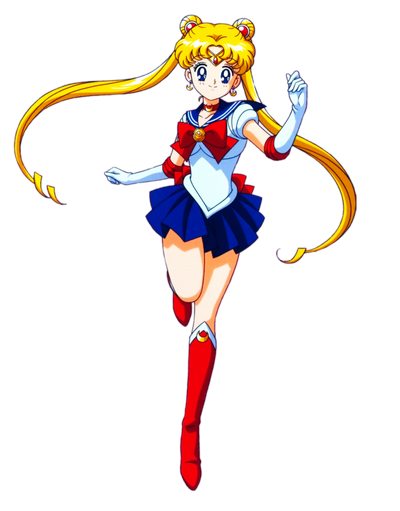 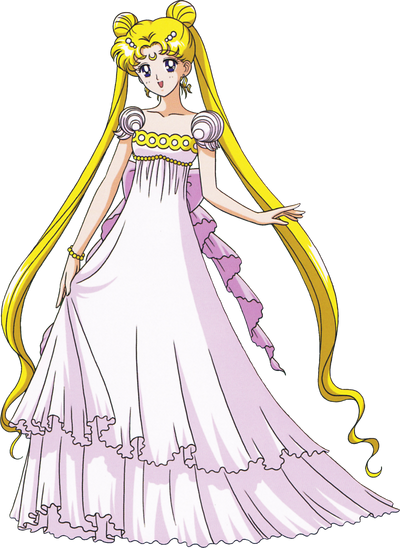 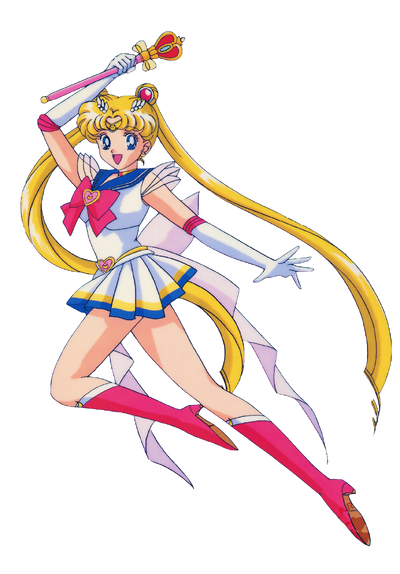 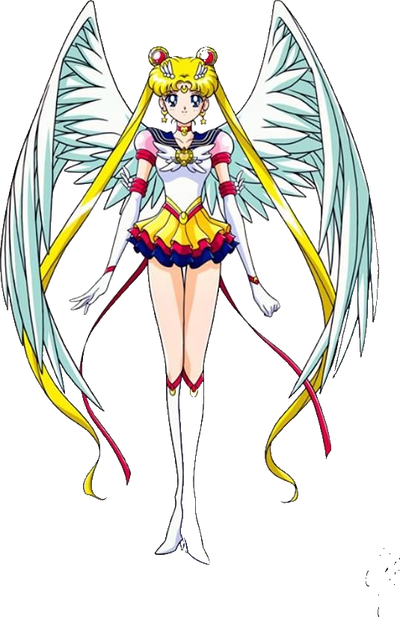 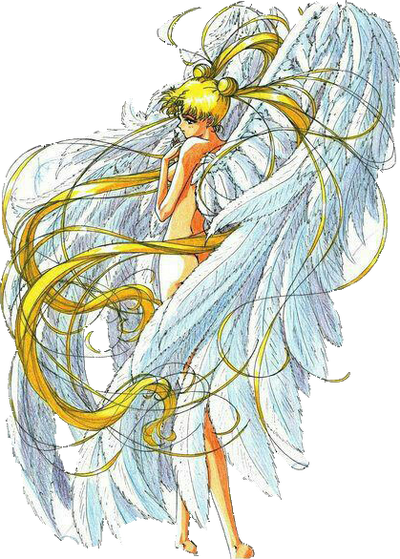 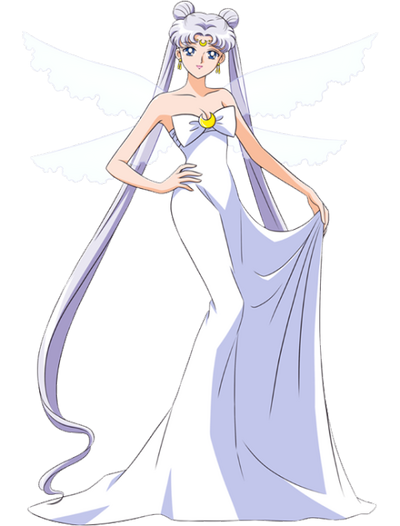 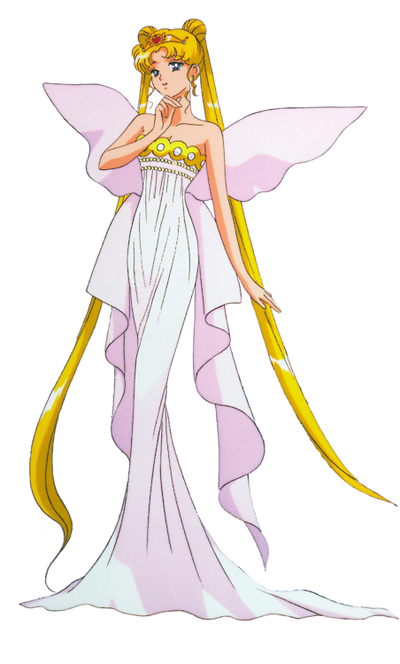 Usagi Tsukino is the present-day incarnation of Princess Serenity and the civilian identity of Sailor Moon. This is the first animated depiction of the original manga character. Usagi's personality in the anime is slightly different to that of the manga.

Powers and Abilities: Superhuman Physical Characteristics, Transformation, Shapeshifting, Enhanced Senses, Sound Manipulation, Transmutation (Into Moon Dust), Telekinesis, Magic, Flight, Immortality (type 1) Aura Healing (It heals all kinds of injuries, even illnesses, and can also free people from Mind Control), Light Manipulation (It can repel any negative energy and purify it), Energy Projection (Her rod projects energy), Resistance to Absolute Zero, Can survive in Outer Space, Ice Manipulation (It can naturally defrost and defrost an entire city), Reality Warping (After her final attack, she shook the reality of an entire planet, she erased all the memory of the event to all the people of the planet, erased all existence of the Dark Kingdom and remodelled the planet. She can also change the events of the world and even avoid her own death), Existence Erasure (With the Silver Crystal), Breaking the Fourth Wall (She knew that she was in an anime, and was arguing with her friends about which of them that would be heroine of the show), Telekinesis (She can throw objects with this ability), Forcefield Creation, Attack Reflection (With the Moon Stick) | Durability Negation (She can bypass durability by attacking the soul of a person and purifying it), Resistance to Gravity Manipulation (Resisted the hyper-gravity of Rubeus), Mind Manipulation (She was not affected by Endymion's brainwashing and Wiseman's mind control), Fire Manipulation (Resisted intense flames), Teleportation, Power Nullification via Positive Energy (Her positive energy can only cancel outout negative energy), Purification (She can turn a person with negative energy positive instead), Resistance to Death Manipulation (Tanked an attack from Pharaoh 90) and Electricity Manipulation (She can casually resist demonic lightning), Regeneration (In a few minutes, she naturally regenerated all her wounds, even on the brink of death), Status Effect Inducement (She can blind her opponents with her energy) | All above but much Stronger, Attack Reflection (She can reflect an opponent's attack) Resurrection (She resurrected Saturn as a baby despite the fact that she was erased), Intangibility (Via butterfly miriade), Sound Manipulation, Matter Manipulation (Can create weapons), BFR with Moon Gorgeous meditation (Super Sailor Moon pulls a beam that seems to change reality and lockss an enemy in a mirror dimension that breaks and kills the target), Resistance to Void Manipulation (She withstood Saturn's attack, which reduced Pharaoh 90 to nothingness) | All of the above but much stronger, Statistics Amplification via Henshin. Resistance to Mind Manipulation (Broke Nehellenia's Mind Control), Black Holes (She survived being absorbed by a black hole), Illusion Creation, Transmutation, and Soul Manipulation (Sailor Crown could not take her Star Seed/Soul), Flight, Reality Warping (She was able to create a New Future for Nehelenia),Sealing (She can seal her opponent in her own crystal or simply lock them into objects like mirrors), Immortality (Type 8. A true Star seed can regenerate a person's body. As long as it is intact, the person will come back) | Transmutation (The silver crystal can transmute someone into a crystal, seal it and reincarnate it into an entirely different person), Forcefield Creation (The Silver Crystal can act automatically and protect the user from attack, it also allows the user to recover quickly), Life Manipulation (She managed to resurrect everybody in a Galaxy), Sleep Manipulation (She caused Saturn to fall asleep), Biological Manipulation (She made all of the people in the world immune to disease), BFR (Via dimensional travel & teleportation), Soul Manipulation (Chaos Galaxia can't remove her Star Seed), Matter Manipulation (Her presence can destroy all the weapons that threaten her)

Attack Potency: Building level (She defeated Kunzite who drained all the energy of Tokyo very easily) | Unknown | Planet level (The energy of the Silver Crystal Surpasses Makaiju's energy, which is easily able to destroy a planet; The Silver Crystal can also destroy a planet) | Possibly Universe level as Princess Serenity (Superior to Wiseman, who can return this universe to nothingness) | Universe level, likely higher (In Super Sailor Form, she was able to get inside Pharaoh 90, and surpass his energy barrier. Only Sailor Saturn managed to do this. She also has a vastly superior power to her previous forms) | Universe level+ (Far superior to all other forms. Eternal Sailor Moon is Superiors to Sailor Saturn. She also created a new story for Nehellenia) | Universe level+ (She fought and purged Chaos Galaxia)

Range: Standard melee range; Tens of meters with her Tiara | Thousands of kilometers and planetary with reality warping | Cross-dimensional with teleportation | Galactic (Her attacks have crossed several galaxies)

The Moon Stick was an item used by Sailor Moon in the first season of the series. She used this item to perform the Moon Healing Escalation attack. The Moon Stick became more powerful after the Silver Crystal was attached to it. The previous owner of the Moon Stick was Queen Serenity.

The Cutie Moon Rod is the weapon used by Sailor Moon to perform Moon Princess Halation.

The Spiral Heart Moon Rod is the third mystical weapon

The Moon Kaleidoscope, or Kaleidomoon Scope, was a weapon given to Super Sailor Moon by Pegasus in the fourth season of the original anime. In the anime it was a much stronger, upgraded version of the Spiral Heart Moon Rod, and in the manga Pegasus transformed two mundane kaleidoscopes. She used it to perform the Moon Gorgeous Meditation attack with great mystical moon/dream-related abilities granted to her by Pegasus.

The Eternal Tiara was the strongest and most powerful moon-based weapon Super Sailor Moon received when she evolved into Eternal Sailor Moon in the original anime version. It was used to perform Starlight Honeymoon Therapy Kiss, and eventually Silver Moon Crystal Power Kiss for the rest of the fifth season.

The Moon Power Tiara is Sailor Moon's second new weapon in the Sailor Stars season and final weapon of the overall series. It is the upgraded form of the Eternal Tiare, and it is created when Eternal Sailor Moon attaches the Holy Moon Chalice to the Tiara.

When Endymion was brainwashed by Queen Beryl, Sailor Moon used the Orgel to make him remember his real self.

Intelligence: Average. She is a regular teenage girl, and was shown to be an academic underachiever, as well as lazy and a crybaby, although the school she goes to is a very difficult school | Despite her young age, she managed to gain access to a medium high-school by working hard and being serious | Princess Serenity is very calm and acts smart, she also has total control over the abilities of the Silver Crystal

Weaknesses: Initially a coward, crybaby, incompetent, clumsy and lazy, but after further development she eventually overcame these character flaws. Hates fighting and violence, merciful to her opponents, often does not use her full power on her enemies. If she uses the Silver Crystal intensely, she can die | She has become responsible and accepted her fate, she will do everything to save a human, but will do everything to annihilate an enemy if it endangers innocents | She avoids killing her opponents if theythey are not evil | None known as Neo Queen Serenity and Queen Serenity

In order to perform this attack, they panicked and started crying. This causes that their odango covers would amplify their wailing until it became physically painful for enemies.

Sailor Moon takes her tiara, turning it into what looks like a glowing white energy disk, says "Moon Tiara Action!", and throws it at the enemy. The enemy is usually destroyed on the spot, disintegrating into moondust.

It reversed the effect of Iguara's magic on the Chanela owners.

Sailor Moon Kick was a physical attack, she used it to kick Kijin Shinokawa's camera away from him while he was under the influence of the Youma Camera

Sailor Moon creates a large spiral of light around her by spinning her Moon Stick, and then unleashes the attack towards her enemies.

To perform this attack, Sailor Moon gets a running start, then crosses her folded arms in front of her chest, as she leaps at her target, striking with her elbows.

All five of the inner Sailor Senshi would perform it, becoming twice as powerful if Super Sailor Moon performed it at the same time. While underneath their target, the Senshi would link hands in a circle and concentrate, combining their unique planetary energies and abilities and sending a massive burst of pure positive energy straight up.

The attack was similar to Sailor Planet Power, though in this attack the energy generated was directed toward a specific target. In the anime, all five of the Inner Senshi had to perform it together.

To perform this attack, Sailor Moon would raise the legendary Spiral Heart Moon Rod to then flip it around her body until finally striking on a pose. After this, she would then spin around and once again hold the rod up again, sending a powerful blast towards her enemies. The last animation is a giant heart smashing through the Daimon, which caused her to scream "Lovely".

To perform this attack, Sailor Moon would raise the Spiral Heart Moon Rod, and then she would flip it around her body until finally striking a pose. After this, she would spin around and once again hold the rod up again, sending several energy ribbons with hearts.

Super Sailor Moon uses the Kaleidomoon Rod to launch a wave of rainbow color which "shatters" an opponent's space-time, locking them inside a glass dimension.

This attack allows her to purge an enemy of any negative thought, as well as to erase the negative side of their existence. 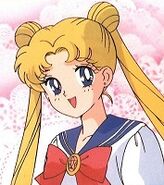 Eternal Sailor Moon
Add a photo to this gallery

Mewtwo (Pokémon) Mewtwo's Profile (Both were 5-B, bloodlusted, an speed was equalized)