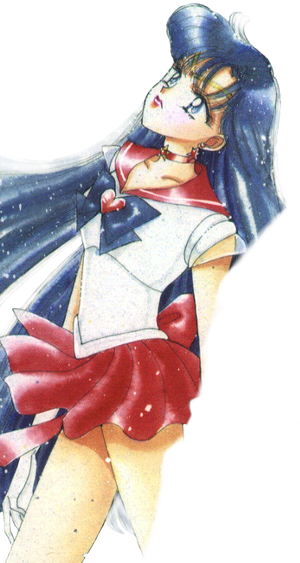 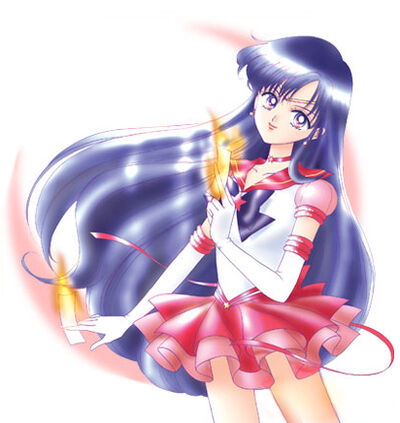 Sailor Mars is one of the five original Inner Sailor Senshi of the Solar System and was the third Sailor Senshi introduced in the manga. Her civilian identity is Rei Hino. Her attacks are based around fire, psychic powers and spiritual powers. This is the original depiction of the character originally created by Naoko Takeuchi.

Superhuman Physical Characteristics, Psychic Abilities, Archery, Flight, Planetary Magic and Empowerment (Astrological Physiology; can draw powers associated with her astrological planet), Extrasensory Perception, Cosmic Elemental Manipulation (Fire Manipulation), Energy Manipulation, Aura, Precognition, Telepathy, Past Life Awareness, Reincarnation/Revitalization (With Sailor Crystal), Immortality (Types 4 and 8. As long as her Sailor Crystal is not destroyed or modified, she will always come back to life), Regeneration (Likely Mid; Sailor Senshi possess the light of the planet protectors, which grants them regeneration), Self-Sustenance (Type 1), Enhanced Senses (Danger intuition, supernatural senses, can sense energy and spatial distortions), Pyromancy, Clairvoyance, Purification and Illusion Negation (Can dispel/nullify evil and illusions with ofuda), Spatial Destruction, Forcefield Creation, Laser Projection, Transformation (along with Cloth Manipulation), Spell Creation and Negation (Can also reverse spells with the henshin), Teleportation (Can also teleport with others and through dimensions), Esoteric Cosmic Manipulation, Resistance to: Radiation, Brainwashing, Illusions, Matter Decay, Space-Time Warping, Existence Erasure (The Dark Pilar and Death Phantom erase things from existence. Sailor Moon has a higher degree, as she can survive the Death Phantom's assault with no problem. Other Senshi were able to resist, but they were weakened), Life-Force and Soul Absorption (She is able to resist the Death Buster's soul absorption)

All previous abilities enhanced, Powers via Crystal through her Planetary Object (with Sailor Crystal which lets her access higher forms and directly tap into the power of her planet), Cosmic Bow Construction, Cosmic and Fire Weaponry, Non-Physical Interaction (Spiritual Attacks), Anti-Magic, Resistance to: Sleep Manipulation and Nightmares

All from previous to a far higher degree

All from previous, Essence Manipulation (Can remove star seeds, Manipulation of the totality of one's being; Energy, Matter, Mind, Soul and Spirit) via the Galactica Bracelets, Self-Sustenance (Type 1 & 3)

Attack Potency: City level (Her attack destroyed Jadeite, and accidentally destroyed a dimension[1]) | Large Mountain level+ (The Guardian Senshi destroyed Kunzite with a combined attack[2]) | Likely Large Star level+ (Stronger than Queen Metalia and First arc Sailor Moon) | Solar System level (Damaged Cyprine, the strongest of the Witches V[3]) | At least Galaxy level (Comparable to Super Sailor Moon, who was far stronger than a being that casually moved a Dimension at MFTL+ Speeds), Multi-Galaxy level with Mars Flame Sniper (Destroyed one of Nehellenia's nightmare dimensions, of which these are supposedly whole universes[4]) | High Universe level (Comparable to the strongest Sailor Crystals in the Universe whose powers are infinite, could withstand a battle with the Sailor Animamates[5]) | Universe level+ under Sailor Galaxia (Additional boost from the Galactica Bracelets increases power far above normal, can KO Multiple Eternal Sailor Senshi at once[6], comparable to Sailor Venus who nullified Eternal Sailor Moon's energy), can ignore durability by destroying star seeds and manipulating one's essence via the Galactica Bracelets | Unknown with the Lambda Power[note 1]

Lifting Strength: Stellar (Was able to move around on a planet with an intense enough gravity not even light can escape it) | At least Stellar | Unknown

Durability: City level (Survived her and Jupiter's attacks reflected back at herself[11]) | At least Large Mountain level+ (Took attacks from Dark Prince Endymion[12]) | Likely Large Star level+ (Survived the Flames of Koan which were stronger then Second Arc Sailor Moon's power[13]) | At least Solar System level (Survived an attack from Sailor Uranus[14]) | At least Galaxy level (Comparable to Super Sailor Moon, who survived within a being that casually moved a galaxy at MFTL+ Speeds), likely higher (Comparable to the others who survived Super Sailor Uranus's World Shaking[15]) | High Universe level (Comparable to Sailor Mercury and Sailor Jupiter) | Universe level+ (Comparable to Evil Sailor Venus) | Unknown with the Lambda Power

Stamina: Very high (She did not look fatigued after performing her attacks) | Likely limitless under Sailor Galaxia | Unknown with the Lambda Power

Weaknesses: Easily startled against less professional opponents, has difficulty adapting to rapidly changing situations | None notable normally, under the control of Sailor Galaxia, she loses her life if her Bracelets are destroyed | Unknown

Henshin: Rei can use the Power of her Sailor Crystal to Transform into Sailor Mars and then her stronger forms. The Henshin Power can also be used to teleport through dimensions or reverse enemy-magic.

The Highest Conventional State of Sailor Senshi, in this state Sailor Mars' powers are comparable with the strongest Sailor Crystals in the Universe. This state increases her statistics and her attack power by a drastic degree.

At the end of the series, Rei absorbed the Lambda Power and could exist in "Perfectly Heavenly Form" within the Galaxy Cauldron which normally erases existence.

Pyromancy: She is also shown to have great affinity with fire, to the point where she is capable to manifest her own future sights by forming images on the flames. The images are very enigmatic and unreliable.

Purification: Even when she is in her civilian form, she can use her "ofuda" (a Shinto talisman used to protect homes from evil spirits) to "exorcize" people, while yelling "Evil Spirit, Disperse!" (although it can cause normal people to faint, as shown in the Act 3, when she tried to "purify" Usagi).

Sixth Sense: Rei is sometimes shown to have a "sixth sense", using it to detect "evil presences" and approaching danger, as shown in the Chapter 6 of Codename: Sailor V manga, but it can fail sometimes, when she mistook Usagi for an evil spirit.

Expert Archer: As a Shrine Maiden, she is an expert archer, and this potential is shown in her "Mars Flame Sniper" attack.