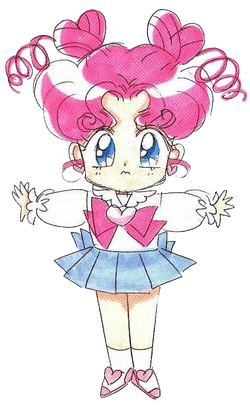 Chibi Chibi is a mysterious little girl who appears in the last arc of the manga, is the civilian identity of Sailor Chibi Chibi, and is the disguised form of Sailor Cosmos. Her appearance was that of a very young child, with red hair set in two heart-shaped odango, and blue eyes. One day, she mysteriously appeared at the Tsukino family home and somehow made Ikuko Tsukino believe that Chibi Chibi was her daughter, similar to what Chibiusa had done on her first appearance. Only Usagi's memory was left intact.

Chibi Chibi's vocabulary was limited to a few simple words (the most frequently used was "chibi" (ちび), meaning "little" or "mini," hence her name) and repeating what other people said.

Sailor Chibi Chibi Moon was Chibi Chibi's Sailor Senshi form, and in some continuities, an alternate form of Sailor Cosmos. She appeared in the Stars arc of the manga.

In this Senshi form, she carried a scepter in the form of a heart with what looked like a planetary ring, and used it to defend herself and Sailor Moon. She was not shown using any attacks of her own, but she did increase Sailor Moon's power. 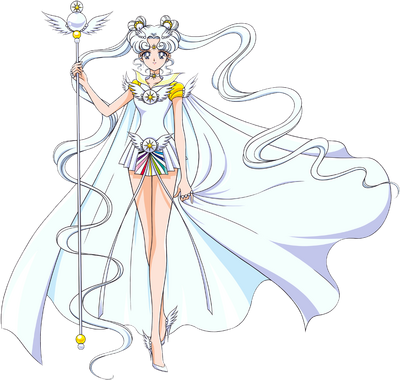 She fled from her time to take refuge in the time of Sailor Moon because of Sailor Chaos, in order to incite her to destroy the source of everything in the universe and all enemies, the Galaxy Cauldron. This was to prevent Sailor Moon from having to endure all the suffering she has experienced.

Guardian Cosmos is a part of Sailor Cosmos who might've been around at the creation of the universe since she possibly created it.

Age: Unknown | Unknown, likely inapplicable due to being a conceptual being and transcending space-time, possibly predates existence

Classification: Human, Sailor Senshi, Embodiment of the Cosmos (Antithesis of Chaos), Guardian of the Universe

Attack Potency: Universe level+ (It's said that Chibi Chibi holds a power as strong as Eternal Sailor Moon[1]. She has easily forced Sailor Galaxia to retreat and was able to counter an attack from Chaos[2]) | Possibly Low Multiverse level (Guardian Cosmos possibly created the universe with the Galaxy Cauldron[3] and Silver Crystal. Also created crystals with power comparable to Chaos. Her essence is also that of the Lambda Power and Cosmos Crystal, Has access to the Lambda Power that can restore everything to the Static Cosmos[3] which involves multiple dimensions and the World of Sailor Pluto, can repair the damage of Chaos. Able to ignore causing an explosion that would destroy everything in the Cosmos)

Speed: Infinite (Easily comparable to Eternal Sailor Moon) | Immeasurable (She can avoid using the space-time corridor, and is able to travel through time just by movement)

Stamina: Likely Limitless | Limitless (Maintains the universe and its matter continuously, battled endlessly with Sailor Chaos and likely to continue on indefinitely)

Range: At least Universal+ | Low Multiversal (Lambda power can affect the cosmos and the World of Sailor Pluto simultaneously)

Intelligence: Unknown, possibly Nigh-Omniscient (She has super-intelligence with the Lambda Power due to the Mercury Crystal as well as a degree of Cosmic Awareness and gets the wisdom of the universe with Guardian Cosmos)

Weaknesses: Has the maturity of a child, teleporting herself and others across vast distances seems to take a lot out of her as she often sleeps after using this ability | Was emotionally compromised by Sailor Chaos, but after being inspired by her past self with power and courage she overcame it. Otherwise, none notable.

Even less is known about Sailor Cosmos. It seems she is a form of Sailor Moon from the even more distant future. She is locked in eternal war with the regenerated stronger form of chaos, Sailor Chaos. She has control over spacetime, able to time travel as it mentions above and able to send the Amazon Senshi back to the far future where they come from easily. This makes sense given the Pluto Crystal which controls space-time is a part of the Cosmos Crystal like all Star Seeds.

Henshin: Chibi Chibi can use the Power of her Sailor Crystal to Transform into Sailor Chibi Chibi Moon. The Henshin Power can also be used to teleport through dimensions or reverse enemy-magic.

In the even further future, Sailor Cosmos, the ultimate form of Sailor Moon, battles Sailor Chaos, the reborn form of her old enemy. In this form, she possesses the Cosmos Crystal itself as her essence, sharing an essence with that of Existence, and emanates the Lambda Power. In this state she can use the powers of every Sailor Senshi, including Sailor Chaos. At this level, Sailor Cosmos no longer needs to cast an incantation or recite an attack name.

As she comes from the infinitely endless cosmos itself, Eternal Sailor Chibi Chibi's magical powers are likely infinitely limitless and god-like. One shown ability was teleporting herself and others across vast distances in a flash of bright pink glowing light. This great power seems to take a lot out of her as she often sleeps after using this ability. Her other magical powers and attacks are unknown, but seem to come from her heart-shaped mystical scepter. She was once able to block Sailor Galaxia's Galactica Super String attack, a sign that she is an extremely powerful character indeed.

Lambda Power: Sailor Cosmos is said to have the Lambda power, a power she holds even when she was Eternal Sailor Moon. It is described as the ability to lose everything so that she can save everything. This can be interpreted in many ways. We see her use many powers but she does not utter any incantation or phrase to activate them, like we see other senshi do at times, so the true scope of her abilities are widely unknown.

Time Travel: We see she has the ability to create an umbrella and fall through the air, which is how Chibiusa had once traveled to the past from the future. However, if she used the Gates of Time, it is odd that she could go unnoticed to either Sailor Pluto, the true Guardian of the Gates of Time or Diana, who watches the gates in Pluto's absence. Extending on her time abilities, she effortlessly sends the Sailor Quartet back to the future with a swipe of her staff.

Supportive Powers: During the battle with Galaxia and Usagi, even in her Chibi Chibi disguise she was able to throw up a strong barrier, much like Saturn's Silence Wall technique and is able to effortlessly support and protect Usagi during the attack. She even is able to assist Usagi who is unconscious into summoning her Eternal Tiare as if she knew how to do so with ease.

Time Manipulation: Able to foresee the near future, or a very heightened sixth sense she was able to manipulate an event to her liking like the instant she helped Chibiusa, and her team reach their exact location right in time. Whatever the case may be, she was seemed aware of Chibiusa and the Quartet’s arrival and attack before any one else and this is confirmed when Chibiusa thanked her for calling out to them in time.