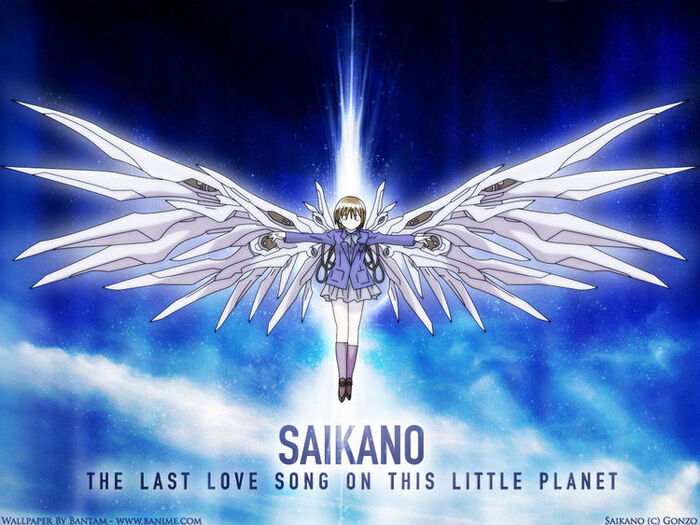 Saikano: The Last Love Song on This Little Planet. (最終兵器彼女 Saishū Heiki Kanojo?, lit. She, the Ultimate Weapon) is a manga, anime, and OVA series by Shin Takahashi, creator of Iihito and Kimi no Kakera. Saikano was originally serialized in Shogakukan's Big Comic Spirits magazine.

A live-action movie adaptation was released in Japan on January 28, 2006 with Aki Maeda starring as Chise.

Although the city is not mentioned by name in the series, many of the locations used in Saikano can by all probability be found in Otaru-shi, west of Sapporo. The train station, "Hell Hill", the Asahi Observation Hill, the view over the harbor, and the school all have similar looking counterparts in the city of Otaru.

The story begins with Shuji (シュウジ Shūji?), a high school student in a Hokkaidō coastal city, walking up to an observatory and reminiscing about his girlfriend, Chise (ちせ?); there he finds her exchange diaries that she purposefully left behind. The ensuing story is narrated by Shuji through flashbacks while reading Chise's diary. Chise, a fellow student in his class, declares her love for Shuji at the beginning of the series. However, Chise is very shy and Shuji is insensitive: neither know how to express their feelings very well, but they do indeed have feelings for each other.

One day, while Shuji is shopping in Sapporo, unknown bombers attack the city in broad daylight. He and his friends run for cover, but notice a fast and small flying object shooting down the enemy bombers. Separated from his friends, Shuji wanders through the wreckage—only to stumble upon Chise; here she has metal wings and weapons—apparently grafted onto her body. She tells him she has become the ultimate weapon, without her knowledge or consent, and that she is seen by the Japan Self-Defense Forces (JSDF) as the last hope for defending Japan. In the anime, it is not apparent why Chise was chosen to be the ultimate weapon or why the country is under attack. It was not until the OVA episodes were released that an explanation for Chise being chosen was offered: her body has the highest degree of compatibility with the weapon system.

This story focuses primarily on Chise's fading humanity as her condition worsens. The main conflict is within Chise herself; she questions whether or not she is human. Her soul is constantly trying to be a normal girl, while her body succumbs to the devastating effects of the weapon cell within her. Fundamentally important to the plot is the relationship between Shuji and Chise. From this, the resolution of the conflict follows. In the end, she is able to realize who she truly is.

A number of minor characters who do not necessarily know of Chise's role in the war have sub-plots that concern everyday people in the context of war: a woman whose husband is constantly away from home, a school boy who joins the army to protect his girlfriend, a girl whose civilian boyfriend is killed in a bombing, and others.